You are here: Home / All News / The Performer-Preacher.

The Performer-Preacher: What Could Go Wrong With That? 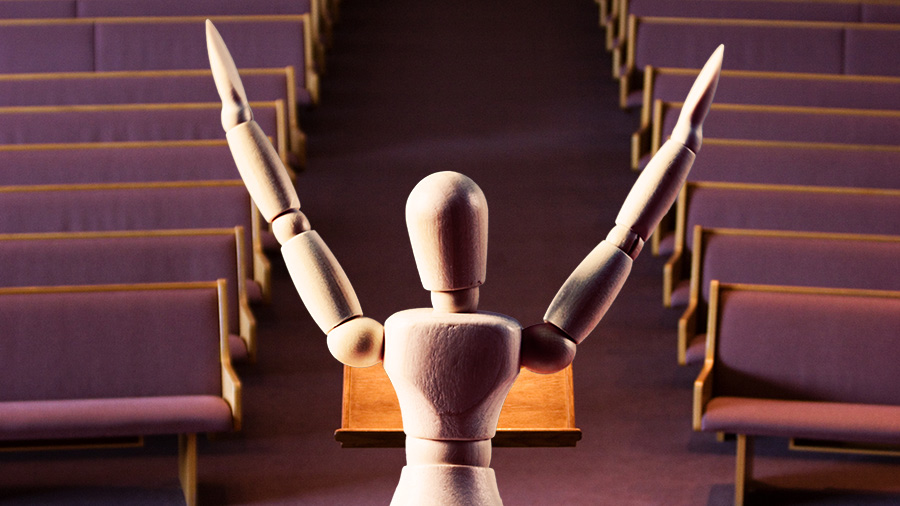 Relevant Magazine reported the other day on a church that wants someone to preach famous sermons from famous pastors. Word for word. Almost every week. Their reasoning:

The church said that people in their area “are hungry but the spiritual food in the churches here are without flavor or life. However, they said: “When you watch a sermon from Craig Groeschel, Andy Stanley or Steven Furtick. You feel like you were fed. Why cant [sic] we have that in a church with out [sic] playing the videos from the above pastors?”

Sounds great, right? You go to an average-ish church, you get a way-above-average message. You don’t have to suffer in front of a screen; there’s a real, live person there in front of you.

So, what could possibly go wrong with that?

I ran this by a pastor friend of mine, and he reminded me how some pastors are great at everything except the pulpit. It’s hard to prepare great messages, week after week after week. I can see how today’s media would make it even harder, as people compare their pastor with the superstars. It’s a lot to accomplish, and a lot to be expected to live up to. Some churches might just be looking for a break from that. So my friend wasn’t in any hurry to criticize.

Making Performance the Thing that Matters?

But here’s what bothers me. I’m reading the Relevant page for what it’s worth, and I think it’s saying they’re looking not so much a preacher but a performer, someone to act out other preachers’ sermons. If that’s what they’re after, then I’d raise all kinds of cautions.

Sure, the church will get a message from it, but it won’t be just the words. They’ll also hear — just as loud and just as clear — that the leader’s life outside the pulpit isn’t all that important. He doesn’t even have to be a leader. It’s far more important that he be a performer. So performance is what matters. (Tell me that message wouldn’t come across!)

Meanwhile, who’s taking responsibility for digging into the Scriptures, so he can answer the questions his congregation is asking? Who’s sweating out the tough passages? Who’s wondering how the big donors are going to react to his message? Who’s telling himself, “I don’t care how the donors react, I’ve got to preach the Word regardless!”?

Put a mere performer up front, and he’s more likely to take a bow than he is to take a stand.

Here’s the risk they run here: Put a mere performer up front, and he’s more likely to take a bow than he is to take a stand.

They say (it’s in the Relevant report) it’s just like a worship leader covering Chris Tomlin’s music. Really? I’m reading back through my last few paragraphs, asking myself whether any of it applies to a worship leader. You’re welcome to do the same. Enough said on that, I think.

I’ve got another idea for this church. Watch the Steven Furtick, Andy Stanley and Craig Groeschel videos. Then have good local leaders lead discussion groups on them. Let them take the proper local responsibility. Let them be pastors and shepherds of their small groups. Let them practice what they’re teaching. Let them lead!

The Performer-Preacher I Once Knew

My pastor friend and I read this two different ways. Maybe it’s because of my experience with a performer-preacher in real life. It was at the church I grew up in, thought it was long after I’d left to move elsewhere. I still have family there, so I’ve heard about this pastor, and I’ve been back there to experience it for myself.

This church had always leaned toward conservative Christian orthodoxy. Then the denomination assigned this man there, and he showed up preaching a liberal message. God was “she” in one sermon, for just one example. The church reacted. Dozens of people left. The giving charts fell off a cliff.

Then he made a chameleon change, a survival move, so he could adapt and fit in there: He started preaching conservative theology.

What You Get From Elevating Performance

The problem after that chameleon-shift wasn’t the preacher’s words, it was the words’ preacher. I don’t just want to hear what a speaker says. I want to know that he believes it; that he’s doing his level best to live it.

I fear for a church that elevates performance the way this one is proposing to do. When you elevate performance, what you get from it —all across the congregation — might just be an act.