You are here: Home / All News / What will they think of next!

Was Our Oldest Itty-Bitty Ancestor All Mouth?

Tiny black specks recovered from a lower Cambrian rock formation in South China’s Shaanxi Province have turned out to be the fossils of globular animals that once wriggled between grains of sediment. Discoverers have dubbed the small animal Saccorhytus coronaries because it has a sac-like body and a mouth surrounded by a corona (crown) of spikes. They have not located a separate digestive output opening on its other end. Therefore, it apparently ate and evacuated its waste through its mouth. Evolutionists say Saccorhytus could be the oldest known ancestor we share with elephants, sea bass, sharks, starfish, sea urchins, and acorn worms.

The anatomy unveiled in the nondescript black fossils by modern imaging technology is remarkable. “To the naked eye, the fossils we studied look like tiny black grains, but under the microscope the level of detail was jaw-dropping,” says University of Cambridge professor Simon Conway Morris, coauthor of the paper describing Saccorhytus.1

Only 1.3 millimeters long and less than a millimeter wide and high, Saccorhytus looks like a very wrinkled elliptical bag. Though rounded, the placement of its conical body appendages, pores, chevron-like folds, and mouth reveal it is bilaterally symmetrical. Surrounding its comparatively large mouth is a crown of conical openings, which scientists think might have served to expel water gulped with its food. Its body covering appears to have been a flexible one, allowing it to wriggle about as it ate. In addition to cones radiating from around its mouth, it has spines and two sets of pores. Scientists think some of the pores might have been sensory organs, but others might represent the attachment points for setae with which it could have intermittently anchored itself in seabed sediment. 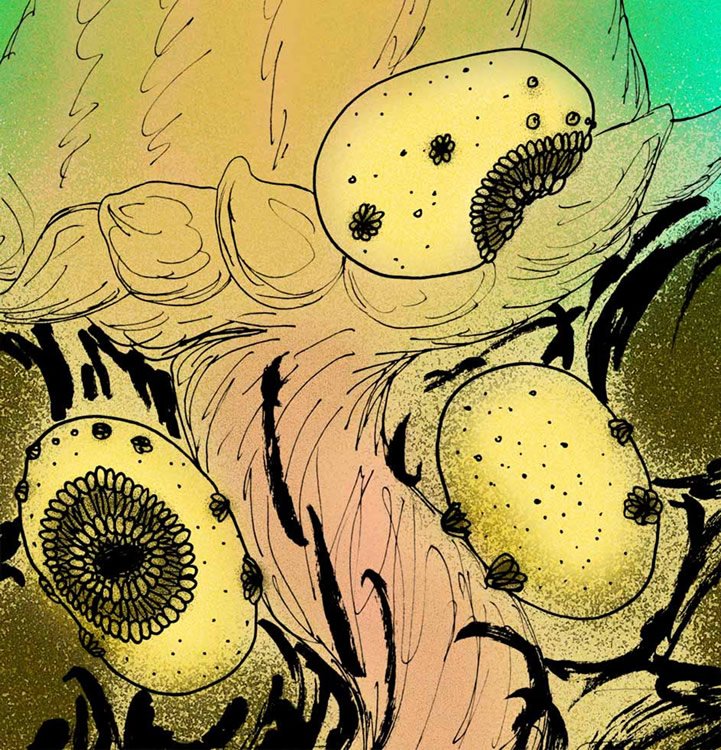 These Names Are A Mouthful

All vertebrates (animals with a backbone or at least a cartilaginous spinal column) and some invertebrates (like starfish and acorn worms) are classified as deuterostomes. This classification is based not on their supposed evolutionary history but on their embryologic development. The word deuterostome means “the mouth is second,” referring to the fact that the first opening to form in the embryonic digestive tract becomes the anus, and the second the mouth. (Animals whose embryos form a mouth from the first digestive tract opening are called protostomes. Earthworms, oysters, and many other invertebrates are protostomes.)

Sacchorhytus is classified as a deuterostome, not because scientists have studied its embryos, but because the folds and conical openings around its mouth resemble features in some other extinct deuterostomes.2 And although the word “deuterostome” seems to suggest all deuterostomes have digestive openings both fore and aft, some have only one. Saccorhytus seems to be one of these, though the authors admit the millimeter-sized animal has so many folds in its tiny wrinkled body that an anus might be eluding them.3

In any case, animals that have only one digestive opening cannot feed constantly. They must eat and digest their food, and then expel their waste material before they can eat again. Such animals’ digestive tracts also lack specialized sections designed to digest specific types of material, like the various parts of our gastrointestinal tract, or the extra stomachs in a ruminating cow. Some animals supposedly evolved a separate waste opening and later de-evolved their anus away. However, in general, animals with only a single digestive opening are considered more primitive, lower on the evolutionary scale, than those with two openings. Saccorhytus is, the authors believe, the oldest and simplest known deuterostome, the evolutionary forebear of all vertebrates and some invertebrates.

Supposed Ancestral Link Between Vertebrates and Many Invertebrates

The three tons of limestone from which the 45 Saccorhytus fossils were gleaned is supposedly 540 million years old. Such an age—if accurate—would make Saccorhytus older than other known deuterostomes. Other deuterostome fossils have been found in Cambrian sedimentary rock dated 510–520 million years old. Due to its greater age, and its resemblance to some more primitive-looking deuterostomes, evolutionary scientists believe they have found the oldest and most primitive deuterostome known to date, one that therefore should resemble the common ancestor they believe we share with all deuterostomes.

“All deuterostomes had a common ancestor, and we think that is what we are looking at here,” explains Morris, describing the evolutionary significance of their discovery.4 “In effect what we are suggesting here is that this is the earliest, oldest, most primitive of the deuterostomes. This is, if you like, the starting point of an evolution which led ultimately to things as different as a sea urchin, starfish and rabbit.”5 Coauthor Degan Shu says, “Saccorhytus now gives us remarkable insights into the very first stages of the evolution of a group that led to the fish, and ultimately, to us.”6

Billions of Dead Things Buried in Rock Layers, But No Transitional Gills

The Cambrian fossil record is called the “Cambrian explosion” to commemorate the curious event in which multicellular life abruptly diversified into virtually all major categories at about the same time. Cambrian strata are loaded with a wide variety of fossilized animals, including many deuterostomes. However, as the authors of the paper describing Saccorhytus note, “The Cambrian fossil record is well-populated with representative examples, but possible intermediates are controversial and the nature of the original deuterostome remains idealized.”7

The fossil record contains many kinds of dead things, but no fossils that demonstrate evolving complexity, evolutionary transitions between completely different kinds of animals.

The same can be said of the rest of the fossil record. The fossil record contains many kinds of dead things, but no fossils that demonstrate evolving complexity, evolutionary transitions between completely different kinds of animals. One of the many transitions evolutionists search for deep in the fossil record is the origin of gills. Because the folds and conical openings on Saccorhytus resemble the gill slits on some other Cambrian deuterostomes, scientists believe these openings evolved into gills as Saccorhytus’s evolutionary descendants made their way up the evolutionary ladder toward our supposed fishy ancestors. However, the folds and conical holes in Saccorhytus doubtless had their own functions. Scientists believe Saccorhytus was small enough to get the oxygen it needed without gills.

Structures that are—based on superficial appearance—commonly called “gill slits” in human embryos have nothing to do with any sort of respiratory function and are not even slits, just folds. Similarly, the superficial resemblance of these undiagnosed anatomical features in Saccorhytus fossils to gill slits in a different animal is not evidence that they evolved into gills. The function of these structures in Saccorhytus is not yet known, but evidently these are simply two different sorts of animals that obtained their oxygen in different ways. There are no transitions in view here. No transitional form of gills. And no evidence of transitions that could make rabbits and sea urchins from little bits of elliptical living grit, not even in half a billion years.