You are here: Home / All News / Jesus can save anyone who will let Him, suffering can lead to salvation Jim Carrey says. 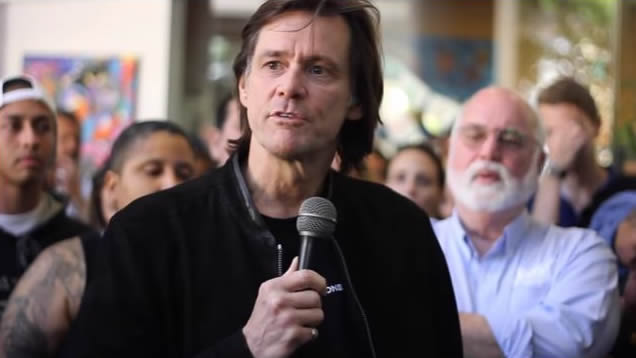 Pointing to the example of Jesus, actor Jim Carrey told former inmates and gang members at Homeboy Industries last month that “Suffering leads to salvation.” He drove his point home, adding, “In fact, it’s the only way.” He could have been talking about himself. Carrey lost a former girlfriend to suicide in 2015 and now is being sued by her mother and ex-husband for her death.

Homeboy Industries “provides hope, training, and support” to those who had been in gangs and prison. Carrey briefly spoke to the group, providing encouragement. “I believe this room is filled with God,” he said, “and that you are heroes to me and I admire you.” He added that when they stepped through the doors they made a decision to “transcend” their backgrounds and to “leave darkness behind.” He told them, “It takes a champion to make that decision.”

Carrey’s challenges from the past two years include his ex-girlfriend’s suicide. In 2015, shortly after they broke up, Cathriona White took her own life. White’s mother and ex-husband now accuse him of supplying White with the medication she used to kill herself. Both are now suing Carrey in civil court. A trial date has been set for April 26, 2018. Even with the trial looming, Carrey encouraged the crowd around him.

Blessing People With Your Work

“Your being here is an indication that you’ve made that decision already. You’ve made the decision to walk through the gate of forgiveness, to grace — just as Christ did on the cross,” he continued.

He suffered terribly and was broken by it, to the point of doubt and a feeling of absolute abandonment, which all of you have felt. And then there was a decision to be made, and the decision was to look upon the people who were causing that suffering, or the situation that was causing that suffering, with compassion and with forgiveness. And that’s what opens the gates to heaven for all of us.