You are here: Home / All News / The New Canaanite DNA Discoveries Actually Confirm the Bible to be true. 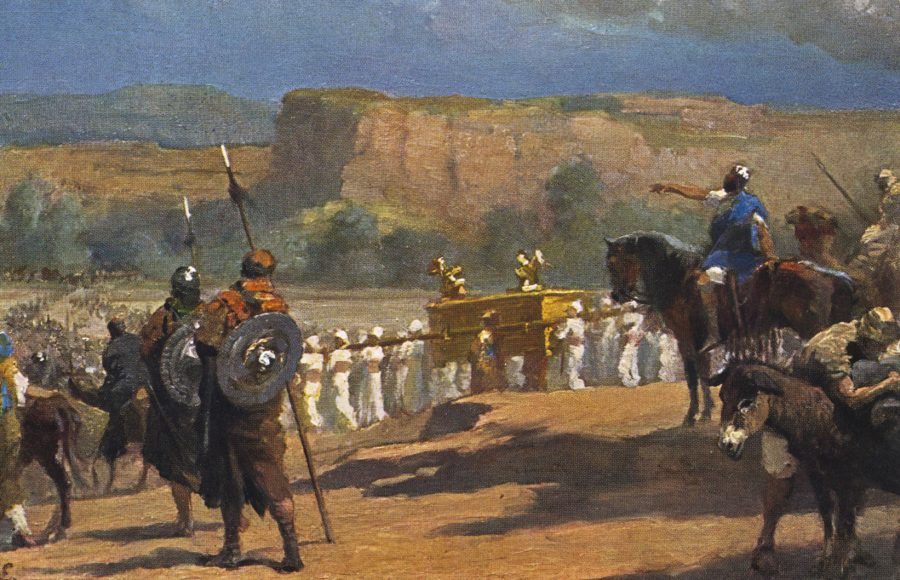 The Siege of Jericho: painting of the scene from the Bible in Joshua, chapter 3, verse 17, showing Israelites with the Ark of the Covenant marching. Jericho was the first city the Israelites, led by Joshua, conquered in Canaan. But the Bible explains that the Israelites failed to conquer all the Canaanites.

There was a spate of headlines last week claiming that new scientific discoveries disproved the historical narrative of the Bible. Headlines included, “DNA vs the Bible: Israelites did not wipe out the Canaanites” and “Study disproves the Bible’s suggestion that the ancient Canaanites were wiped out.” Actually, the reverse is true: The discoveries confirm just what the Scriptures state.

These headlines didn’t come from obscure, Bible-bashing websites. Instead, they came from Cosmos Magazine, Yahoo.com, New Scientist (claiming that the discovery helped unravel the “true fate” of the Canaanites), and others. As stated in the New York Times:

There is a story in the Hebrew Bible that tells of God’s call for the annihilation of the Canaanites, a people who lived in what are now Jordan, Lebanon, Syria, Israel and the Palestinian territories thousands of years ago.

“You shall not leave alive anything that breathes,” God said in the passage. “But you shall utterly destroy them.”

But a genetic analysis published on Thursday has found that the ancient population survived that divine call for their extinction, and their descendants live in modern Lebanon.

The problem, again, is the word “But.” There is no contradiction between this genetic discovery and the Old Testament accounts. A more accurate statement would have been, “But the Hebrew Bible tells us explicitly that Israel failed to complete this mission of extermination, and a genetic analysis published on Thursday lends confirmation to this account, finding that the ancient population survived that divine call for their extinction, and their descendants live in modern Lebanon.”

As for the study itself,

Dr. Tyler-Smith and an international team of geneticists and archaeologists recovered ancient DNA from bones belonging to five Canaanites retrieved from an excavation site in Sidon, Lebanon, that were 3,650 to 3,750 years old. The team then compared the ancient DNA with the genomes of 99 living people from Lebanon that the group had sequenced. It found that the modern Lebanese people shared about 93 percent of their ancestry with the Bronze Age Sidon samples.

What did the team conclude? According to Iosif Lazaridis, a Harvard geneticist who was not involved in the study, “it turns out that people who lived in Lebanon almost 4,000 years ago were quite similar to people who lived there today, to the modern Lebanese.”

The Old Testament Book of Joshua Confirms This

You don’t need to be a Bible scholar to figure this out. You don’t even need to read the Hebrew language. Any English Bible will do. The story is forthright and clear.

After the death of Moses, it was up to Joshua to lead the people into the promised land, the land of Canaan, driving out the peoples that lived there. These included “the Canaanites, the Hittites, the Amorites, the Perizzites, the Hivites, and the Jebusites” (Exod. 3:8). According to a number of biblical passages, these peoples were notoriously wicked (see, e.g., Deut. 9:4-5). Still, God told Abraham that he would have to wait 400 years before his descendants could possess their land. At that time, their guilt and wickedness would be complete (see Gen. 15:13-21).

Lebanon remained a distinct kingdom, never conquered by Israel. All this is recorded in the Hebrew Scriptures.

The Book of Joshua recounts Israel’s conquest of Canaan, with city after city falling before them. But was it a complete victory? Was it total annihilation of the enemy? Not even close.

The verses that follow contain a detailed list of all the regions that were not yet taken, including, “all Lebanon, toward the sunrise, from Baal-gad below Mount Hermon to Lebo-hamath, all the inhabitants of the hill country from Lebanon to Misrephoth-maim, even all the Sidonians” (Jos. 13:5-6, my emphasis). So, the inhabitants of Lebanon were not driven out, as these DNA discoveries seem to confirm.

So Does the Book of Judges

The next book of the Bible, called Judges, continues the story after Joshua’s death. There, an angel of the Lord rebukes the people for failing to drive these nations out. The angel even says, speaking for God, “I will not drive them out before you, but they shall become thorns in your sides, and their gods shall be a snare to you” (Judg. 2:3). In fact, the last 17 verses of Judges 1 detail all the peoples that Israel failed to drive out. Verse 31 specifically mentions “the inhabitants of Sidon,” which was one of the major cities of Lebanon.

And look at what the very next chapter states:

Now these are the nations that the LORD left, to test Israel by them, that is, all in Israel who had not experienced all the wars in Canaan. It was only in order that the generations of the people of Israel might know war, to teach war to those who had not known it before. These are the nations: the five lords of the Philistines and all the Canaanites and the Sidonians and the Hivites who lived on Mount Lebanon, from Mount Baal-hermon as far as Lebo-hamath. They were for the testing of Israel, to know whether Israel would obey the commandments of the LORD, which he commanded their fathers by the hand of Moses. So the people of Israel lived among the Canaanites, the Hittites, the Amorites, the Perizzites, the Hivites, and the Jebusites. And their daughters they took to themselves for wives, and their own daughters they gave to their sons, and they served their gods (Judg. 3:1-6, my emphasis).

In the centuries that followed, Lebanon remained a distinct kingdom. It was sometimes at war and sometimes had good relations with Israel, but it was never conquered by Israel. All this is recorded in the Hebrew Scriptures.

So, the headlines should have read, “DNA Confirms the Bible.” Why, then, didn’t these news outlets tell us the truth? Your guess is probably similar to mine.