You are here: Home / All News / Can a Christian be forced to do art work?

Make the Case for Liberty 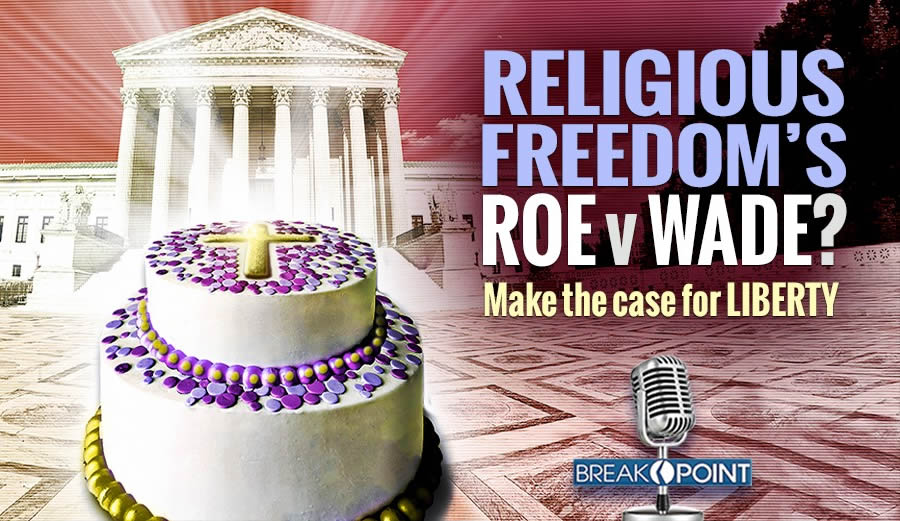 We’ll be talking a lot on BreakPoint about the case of Colorado baker Jack Phillips. Why? Because religious freedom hangs in the balance.

The Supreme Court has agreed to hear arguments in the case of Masterpiece Cakeshop v. Colorado Civil Rights Commission. The stakes could not be higher. In fact, as Ed Stetzer and I said recently on “BreakPoint This Week,” this may be the religious freedom equivalent of Roe v Wade.

What the media and LGBT activists are telling the world is that this case is about a baker who uses his religious beliefs as a cover to discriminate against people. But that, my friends, is baloney.

Here are the facts. For 23 years, Jack Phillips, a Christian and owner of the Masterpiece Cakeshop, gladly served all people — young and old, black and white, gay and straight. But in 2012, two men entered the shop and asked Phillips to make a wedding cake for their same-sex ceremony. Phillips declined, because his faith would not allow him to send the message through his art that he approved of same-sex “weddings.” So he offered the men any pre-made cake in the shop or even any other baked good in his shop.

But the men got angry and left.

Soon Jack was receiving hate mail and threatening phone calls. He was hauled before the Colorado Civil Rights Commission and fined. Taking a page out of the Chinese Communist playbook, the commission “ordered Jack and his staff to design cakes for same-sex wedding celebrations, go through a ‘re-education’ program, implement new policies to comply with the commission’s order, and file quarterly ‘compliance’ reports for two years to show that Jack has completely eliminated his religious beliefs from his business.”

And so in the fall, the Supreme Court will hear the case. It will either find a balance between the rights of religious believers and the public-accommodation rights of gays, or, heaven forbid, it will rule that the price of citizenship is the forfeiture of faith.

Now all of this sounds apocalyptic, but note this. Justice Anthony Kennedy will likely be the swing vote in this case. While he has ruled on the side of religious institutions recently, for nearly 30 years now, he has ruled that anti-sodomy laws, anti-discrimination laws that exclude gays, denying gays the right to marry — all of these things amount to “animus” against homosexuals and deprive them of dignity.

So, in other words, if you disapprove of gay marriage, that means you aren’t voicing a neutral opinion — you’re being hostile to gay people. You, then, to use the left’s favorite label, are a hater.

So what can we do now that it’s in the hands of the Supreme Court? Can we actually do anything to influence the outcome of this case? Here’s what Chuck Colson had to say about this back in 2012:

The textbook answer, of course, is no: The Court consists of judges who’ve been appointed for life, who are not subject to public opinion; their supreme obligation is to the Constitution of the United States.

That’s the way it is supposed to be. In practice, it doesn’t work that way. The Supreme Court justices do read the newspapers; they know what the public will and won’t accept.

What this means is that you and I have to be heard. Hit Facebook, get your pastor to speak out about the Jack Phillips case. Get the facts out there.

Here’s Chuck Colson again, referring to yet another case years ago before the Court, with another suggestion:

Will you join in a fast and prayer about this issue? Will you pray for the members of the Court? And will you also let your voices be heard? Letters to the editor and to congressmen can create a public debate that does make a difference. We need to raise a groundswell of protest that will sweep across this country and will be felt right here — in the court chambers in Washington, D.C.

Originally published on BreakPoint.org: BreakPoint Commentaries. Republished with permission of The Colson Center for Christian Worldview.