You are here: Home / All News / Venezuela reminds us why we don’t want Socialism here in the US.

Any government in a democratic country that failed this spectacularly would have been relegated to the dustbin of history long ago. 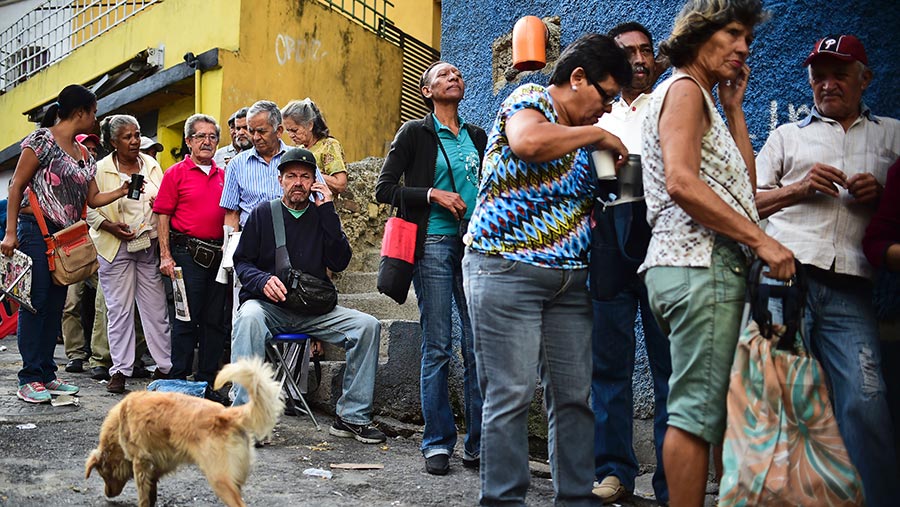 People queue to buy basic food and household items outside a supermarket in the poor neighbourhood of Lidice, in Caracas, Venezuela, on May 31, 2016.

Venezuela is a woeful reminder that no country is so rich that it can’t be driven into the ground by revolutionary socialism.

People are now literally starving — about three-quarters of the population lost weight last year — in what once was the fourth-richest country in the world on a per capita basis. A country that has more oil reserves than Saudi Arabia is suffering shortages of basic supplies. Venezuela now totters on the brink of bankruptcy and civil war, in the national catastrophe known as the Bolivarian Revolution.

The phrase is the coinage of the late Venezuelan strongman Hugo Chavez, succeeded by the current Venezuelan strongman Nicolas Maduro. The Western Hemisphere’s answer to Recep Tayyip Erdogan of Turkey, Maduro has instituted an ongoing self-coup to make his country a one-party state.

The Chavezistas have worked from the typical communist playbook of romanticizing the masses while immiserating them. Runaway spending, price controls, nationalization of companies, corruption and the end of the rule of law — it’s been a master class in how to destroy an economy.

The result is a sharp, years-long recession, runaway inflation and unsustainable debt. The suffering of ordinary people is staggering, while the thieves and killers who are Chavezista officials have made off with hundreds of billions of dollars. At this rate — The Economist calls the country’s economic decline “the steepest in modern Latin American history” — there will be nothing left to steal.

Any government in a democratic country that failed this spectacularly would have been relegated to the dustbin of history long ago. Maduro is getting around this problem by ending Venezuela’s democracy. The Chavezistas slipped up a year or two by allowing real elections for the country’s National Assembly, which were swept by the opposition. They then undertook a war against the assembly, stripping it of its powers and culminating in a rigged vote this week to create a constituent assembly to rewrite the constitution.

The goal of Maduro’s alleged constitutional reforms is to no longer have a constitution worthy of the name. All you need to know about the spirit of this exercise is Maduro’s threat to jail the opposition leaders who boycotted the vote (outside observers estimate less than 20 percent of the electorate participated, despite the regime’s absurd claim of a popular wave of support).

Denied the ordinary means of dissent via the press and elections, the opposition has taken to the streets. Already more than 100 people have been killed in clashes over the past several months. Worse is yet to come. Lacking legitimacy and representing only a fraction of the populace, the Maduro regime will rely on the final backstop of violent suppression. It is now the worst crisis in a major country in the Western Hemisphere since the heights of the Colombian civil war in the 1990s and 2000s.

There is no easy remedy to Venezuela’s agony. If meditation were the solution, the country never would have gotten to this pass. Endless negotiations between the government and the opposition have gone nowhere — the organized crime syndicate that has seized power under the banner of revolution knows it has no option but to retain its hold on power by any means necessary. The U.S. needs to use every economic and diplomatic lever to undermine the regime and build an international coalition against it.

We should impose more sanctions on specific officials and on the state-run oil company; we should advertise what we know about the details of how Chavezistas park their ill-gotten gains abroad; we should nudge our allies to further isolate the Venezuelan government by pulling ambassadors and breaking diplomatic relations. The hope is that with enough pressure, the regime will crack, and high-level officials will break with Maduro, weakening his position and making a negotiated restoration of democratic rule possible.

In the meantime, the Bolivarian Revolution is proceeding according to its sick logic — and there will be blood.

Rich Lowry can be reached via e-mail: [email protected]