Pastor and Wife Let Son Identify as Girl Since Age 2, Prepping Him for Puberty Blockers 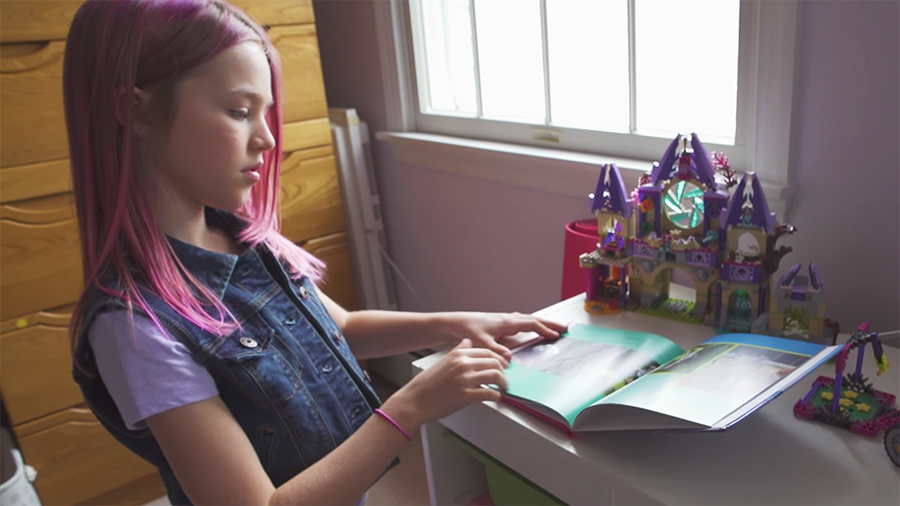 A New Jersey pastor and his wife have permitted their 10-year-old son to identify as a girl since the age of two. According to the child’s mom, they did that because he “loved pink and sparkles, and all things girly and that was fine with us.” They report that at one time he tried to jump out of a second-story window to take his life. They are getting ready to put the boy on puberty blockers. Some medical experts are calling that child abuse.

Pink Hair at the Age of Two

At the age of two Ben Bruesehoff’s parents, Pastor Christopher Bruesehoff and Jamie Bruesehoff of Holy Counselor Lutheran Church in Vernon, New Jersey, began dying their son’s hair pink. They explained that it was because he “gravitated toward typically feminine things.” He now calls himself “Rebekah.” He wears girls clothing and sports long, pink hair. “Rebekah has always been gender non-conforming,” said the pastor’s wife. Ben added, “I felt like I was a girl because I liked the color pink and I liked girls’ clothes and how they wore their hair and stuff.”

Once Ben started identifying as “Rebekah” he became happy, his mom explained. “When I see pictures of Ben I just think of it as part of my past and now I’m me,” Ben said.

A Denomination That Embraces the LGBT Agenda

They could have concluded that their son’s suffering was the sign of a psychological problem. Instead, the pastor and his wife have embraced his gender confusion. Their church is part of the Evangelical Lutheran Church of America (ELCA), which embraces homosexual behavior. As it states on its website:

Because Jesus always judged cultural and biblical rules and laws using his principles of love and forgiveness, and rejected biblical rules that violated those principles, his followers are obligated to do the same. Those who say homosexual behavior is morally wrong in principle and should not be tolerated in the church must justify that judgment in terms of the principles of love and forgiveness. We cannot rely on St. Paul to do that for us in the 21st century. … St. Paul’s condemnation of homosexual behavior must be examined in light of Jesus’ principles as they apply in our culture, and not just blindly followed.

Further, the ELCA added: “If heterosexual Christians can manage to get around Jesus’ judgments, they certainly ought to be able to get around St Paul’s.” The statement likely refers to Romans 1:18-27, where Paul makes clear that homosexuality is a shameful sin. In effect, the ELCA is saying, “If you sin, I can sin, too.”

The Stream reached out to Pastor Bruesehoff. We did not receive a response prior to publication.

The pastor and his wife embrace the transgender movement as a whole. In her article on Medium, Jamie Bruesehoff wrote that they were supporting Gavin Grimm in her case. Grimm is a female who identifies as male. She sued for the right to use the boy’s restroom at her high school.

My husband, Rev. Christopher Bruesehoff, was one of nearly 2,000 faith leaders to sign an amicus brief supporting Gavin Grimm and the rights of all transgender students, standing in solidarity with the trans community. We are proud to be a part of this historic case, the first concerning transgender equality to ever go before the U.S. Supreme Court — and we hope to see the Supreme Court rule on the right side of history in this case this spring.

Ben is now getting ready for puberty blockers. He will have to decide about sex reassignment surgery — after he turns 18. His mom explained the process:

Rebekah really doesn’t want to think about the medical side of it. She doesn’t want to develop into a man. Medically transitioning involves a lot of different stuff and every transgender person chooses their own adventure. For Rebekah, the first step would be puberty blockers which will pause puberty and prevent her from going through male puberty and developing secondary male characteristics like facial hair, a deeper voice and an Adam’s apple that are irreversible.

The next step would be cross hormones. Rebekah is a natal male and so she would take estrogen to develop and go through female puberty. As far as surgery she hasn’t indicated a desire for that, but that is a decision she gets to make down the road anyway. That’s not something she would do before she is 18.

Michelle Cretella is President of the American College of Pediatricians (ACP). She wrote recently that affirming transition for gender-dysphoric children is dangerous and unnecessary. Hormone blockers expose children to greater risk of:

There’s also a risk for sterility.

Further, some 75 to 95 percent of gender-dysphoric children “ended up happy with their biological sex after simply passing through puberty.”

Today’s institutions that promote transition affirmation are pushing children to impersonate the opposite sex, sending many of them down the path of puberty blockers, sterilization, the removal of healthy body parts, and untold psychological damage.

In her article, Jamie said God created Ben to be Rebekah. And God does not make mistakes. She wrote:

We may not entirely understand the science around why people are born transgender or even what it all means for our daughter’s future, but we know that God created each and every one of us in God’s own image. God does not love our daughter in spite of her gender identity. God did not put her in the wrong body. This is who she has always been, who God created her to be, and like I’ve heard from so many who want to dispute transgender identities, God doesn’t make mistakes.

She’s right. God didn’t make a mistake. He made Ben.

The Stream will soon be publishing an open letter from Joseph Sciambra to Pastor Bruesehoff. Sciambra just completed a powerful three-part series for The Stream on his journey from gender confusion to wholeness in Christ. He empathizes with young Ben. He’s been there.

Share to FacebookShare to TwitterShare to PrintShare to More7