You are here: Home / All News / These people don’t believe the New Testament.

Down the Slope: A Small But Steadily Growing Number of Americans Think Polygamy is Moral 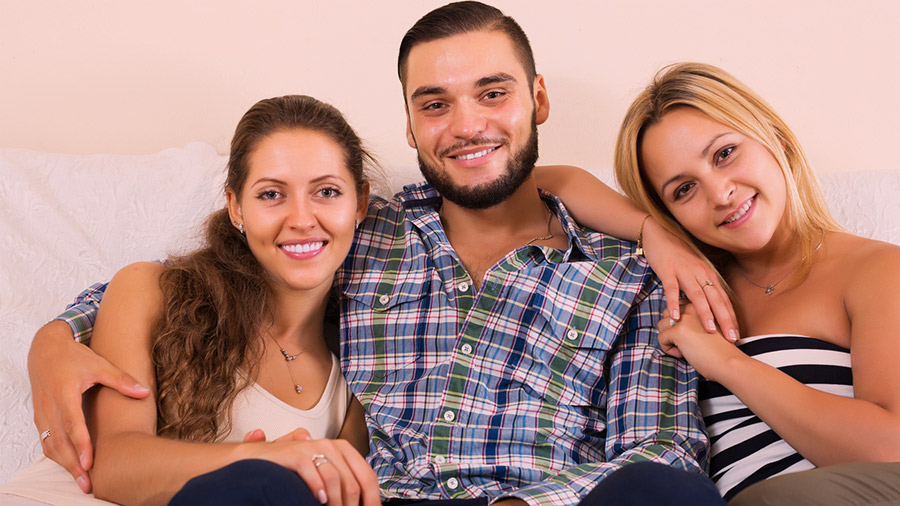 Gallup reports that 17 percent of Americans think polygamy is just fine. That’s one in six. The percentage has gone up from 14 to 17 percent just in the last year.

No one in America believes in polygamy, right? Even those who believe in same-sex marriage think that it can include only two spouses. Isn’t that just common sense?

Not any more. Gallup reports that 17 percent of Americans think polygamy is just fine. That’s one in six. The percentage has gone up from 14 to 17 percent just in the last year.

Gallup began measuring the moral acceptance of polygamy in 2003. For years, rates remained in the single digits, analyst Andrew Dugan wrote in late July. In 2011, the survey wording changed. Instead of many wives, Gallup asked respondents what they thought of many “spouses.” The new wording ushered in the double-digit acceptance rate.

In America, only a few fringe religious groups practiced polygamy. Today, non-religious Americans are more likely to be okay with it. They’re also most likely to accept other historically taboo behaviors.

Mormons have been the most famous for polygamy. Now they’re currently among those least likely to approve. The Church of Jesus Christ of Latter-Day Saints (LDS) stopped endorsing “plural marriage” in 1890. In 1904, it completely banned it worldwide.

Dugan notes that those identifying with “a Christian religion are less likely than the overall sample average” to accept polygamy. Polygamy advocates sometimes point to biblical figures with more than one spouse. Christians reject the practice. They view the first couple, Adam and Eve, in Genesis 2 as the model for marriage the way God intended: one man and one woman. They follow Jesus’s words when he said a man and a woman become one flesh.

Dugan points out two possible explanations for the growing stamp of approval. TV shows in the last decade have featured polygamous relationships. TLC’s reality show Sister Wives premiered in 2010. HBO’s fictional Big Love ran from 2006 to 2011. There are plenty more. Dugan acknowledges that the shows don’t always feature characters in the best light. Even so, they may soften some people’s views.

Another explanation could be the leftward shift in Americans’ moral understanding. However, polygamy is still illegal in all 50 states, even as approval rates creep up.

For years conservatives warned same-sex marriage would lead to other practices Americans opposed even more strongly. Polygamy was often mentioned as the probable next step.

Their fears, it seemed, were confirmed right away. The day the Supreme Court approved same-sex marriage, a Politico headline declared, “It’s Time to Legalize Polygamy.”

“Welcome to the exciting new world of the slippery slope,” popular academic writer Frederik DeBoer begins. “Now that we’ve defined that love … isn’t driven by gender alone, why should it be limited to just two individuals?”

Jonathan Rauch, a self-proclaimed “gay marriage advocate,” responded. “No, Polygamy Isn’t the Next Gay Marriage,” his headline insisted. He called polygamy a “competition among high-status men to hoard marriage opportunities.” He also cited evidence that violent abuse and other forms of crime are more common in polygamous communities.

But acceptance of polygamy has continued to climb since the Obergefell decision in 2015, after a slight dip the next year.

Other Kinds of “Poly”

As views toward polygamy change, polyamory is becoming even more acceptable than polygamy. One in five Americans have reportedly engaged in “consensual nonmonogamous relationships.” That’s almost 20 percent of the population.

In March, NPR examined the “cultural moment for polyamory.” The New York Times delved into the details of several “open marriages” in a high-profile May piece. In 2009, Newsweek asked if polyamory was “the next sexual revolution.” Author Jessica Bennett noted that participants weren’t pursuing activism. But one legal pain was fairly common: custody battles.

Eight years later, that continues to prove true. In March a New York judge granted custody rights to three adults in a group relationship. Only two of the three were married (and then divorced). But all three eventually emerged with parental rights to one boy. According to Slate writer Christina Cauterucci, the decision “could set solid legal precedent for … polyamorous families.”

All in all, polyamory, like its married version, “seems to be coming out of the closet.” But Dr. Alan J. Hawkins doesn’t think it will translate into actual polygamy any time soon. Hawkins is a family life professor at Brigham Young University.

“The pillar of marital monogamy appears to be made of solid stuff,” he wrote in May for the Institute of Family Studies. He cited several studies revealing that most Americans strongly favor monogamy yet. “Despite the big changes to the meaning of modern marriage, monogamy is alive and well,” he said.