You are here: Home / All News / “White Supremacy” has no place, whatsoever, in Christianity! 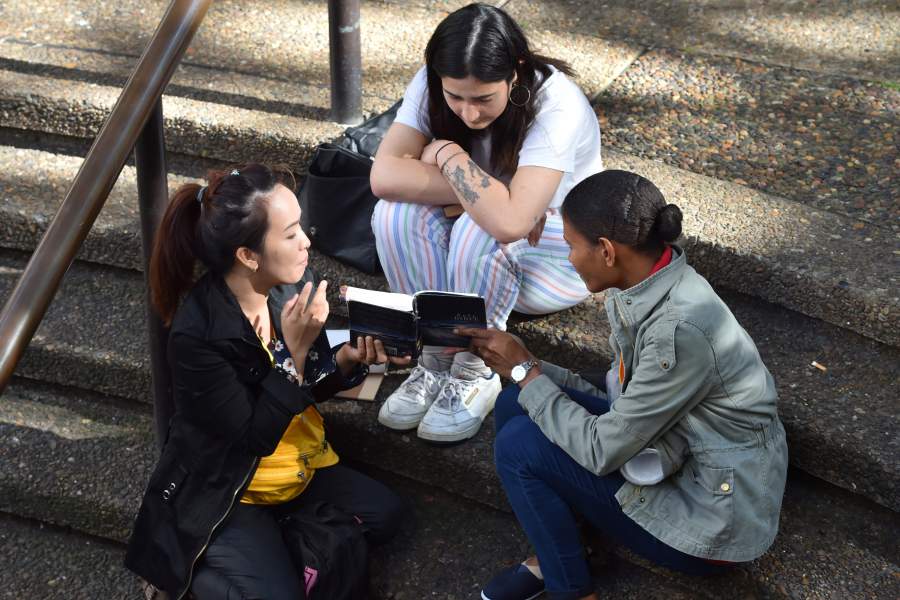 Women from different ethnic backgrounds read the Bible on a street in Sydney, Australia on April 20, 2017.

What is racism? According to the Oxford English Dictionary, it is “the belief that all members of each race possess characteristics, abilities, or qualities specific to that race, especially so as to distinguish it as inferior or superior to another race or races.”

Race, as we often use the word, is a myth. Biology and genetics prove this. According to the U.S. National Library of Medicine, “The information in DNA is stored as a code made up of four chemical bases … Human DNA consists of about 3 billion (of these four) bases, and more than 99 percent of those bases are the same in all people.”

Monkeys, canines, felines, fish, and, for that matter, the 11 varieties of California brook trout have sub-species. People don’t. There are only human beings. One race.

Jesus’s teaching and practice on nationality and ethnicity display his disdain for prejudices based on heritage or appearance.

Tiny genetic variations account for different characteristics. They are passed along based on people who look alike living for lengthy periods in the same area. This is why most Swedes are blond and why Asians have an epicanthal fold on their upper eyelids. So (big surprise), when men mate with like-appearing women, they have children who look like them.

That’s why Nigerians generally have very dark skin. Ethiopians are fairer. The Dalits of India are much darker than the Nepalese. The Norse are taller than South African Bushmen. These ethnic differences don’t make different “races.”

“Anthropologists have shown for many years now that there is no biological reality to human race,” according to Washington University professor of physical Anthropology Dr. Robert Sussman. “There are no major complex behaviors that directly correlate with what might be considered human ‘racial’ characteristics. There is no inherent relationship between intelligence, law-abidingness, or economic practices and race, just as there is no relationship between nose size, height, blood group, or skin color or any complex human behaviors.”

What the Bible Says

Does the Bible back up the science? Let’s take a look (with emphases added):

Now the man called his wife’s name Eve, because she was the mother of all the living. Genesis 3:20

I will bless those who bless you, and him who dishonors you I will curse, and in you all the families of the earth shall be blessed. Genesis 12:3

Opening his mouth, Peter said: “I most certainly understand now that God is not one to show partiality, but in every nation the man who fears Him and does what is right is welcome to Him. Acts 10:34-35

And he made from one man every nation of mankind to live on all the face of the earth, having determined allotted periods and the boundaries of their dwelling place. Acts 17:26

After this I looked, and behold, a great multitude that no one could number, from every nation, from all tribes and peoples and languages, standing before the throne and before the Lamb, clothed in white robes, with palm branches in their hands, and crying out with a loud voice, “Salvation belongs to our God who sits on the throne, and to the Lamb!” Revelation 17:9-10

God has made every one in His image and therefore of equal value. This is not, for those who believe that the Creator of the universe has revealed Himself in Scripture, debatable.

Jesus’s teaching and practice on nationality and ethnicity display his disdain for prejudices based on heritage or appearance. Consider:

In Matthew 15:21-28, Jesus healed the daughter of a Canaanite woman “in the region of Tyre and Sidon,” a distinctly non-Jewish region. Interestingly, she came to Jesus for healing even though the temple of the pagan god Eshmun, a “healing” god, was only three miles north of Sidon.

The New Testament church followed her Lord’s instructions and example. It was racially and ethnically rich.

Luke 10:25-37 and John 4:1-42 provide the Parable of the Good Samaritan and Jesus’s encounter with the Samaritan Woman: “The Samaritan woman said to him, ‘How is it that you, a Jew, ask for a drink from me, a woman of Samaria?’ (For Jews have no dealings with Samaritans.)” There was hostility between these groups. Jews regarded Samaritans as “unclean” racially and as heretics theologically. Yet Jesus talked with this “inferior” woman publicly and as an equal. And it was the “inferior” Samaritan who won his praise for caring for the wounded man in the road.

Jesus concluded his earthly ministry by telling his the apostles to “make disciples of all nations” and to spread the gospel in “Jerusalem and in all Judea and Samaria and to the end of the earth” (Matthew 28:18-20 and Acts 1:8). He did not designate greater and lesser people groups. He called on his followers to reach everyone with his redemptive love. Period. No qualifications, no ifs, ands, or buts.

“Christianity … Has No Dominant Culture”

The New Testament church followed her Lord’s instructions and example. It was racially and ethnically rich. Predominantly Jewish in origin, the church expanded to include such Greeks as Lydia, a merchant of Thyatira (Acts 16:14-15) and such Romans as the Roman Centurion Cornelius (Acts 10:10-16) and members of the Imperial (Praetorian) Guard (Philippians 1:13). The Ethiopian official (Acts 8:27) and Simeon “called Niger” (Acts 13:1; niger is a nickname meaning “black”) were sub-Saharan African. Lucius of Cyrene was from a Roman colony in what is now Libya (Acts 13).

“Multicultural diversity is in the very DNA of the gospel,” says J.D. Greear. “Christianity, statistically speaking, has no dominant culture. It is the most diverse movement in history. So the fact that the majority of churches in the United States are predominately one culture is an abnormality.”

So, anyone claiming to be Christian who advocates “white supremacy,” black or Latino or Asian or Native American inferiority, anti-Semitism, “racial” segregation, or anything else resembling these apostacies needs to repent.