You are here: Home / All News / Where is God when things go wrong, like the flood in Houston?

When We’re Blindsided by the Storms of Life 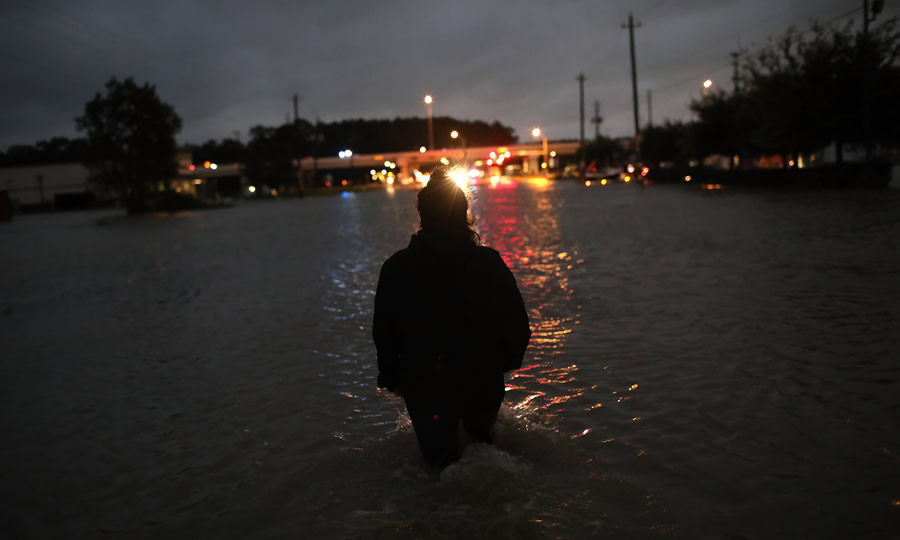 In this Aug. 29, 2017 photo, a north Houston resident walks through waist deep water while evacuating her home after Hurricane Harvey caused severe flooding.

The people around Houston have been blindsided by circumstances they could not control. Though thousands of volunteers have joined professionals in trying to help, most of the country stands both helpless and keenly aware that we too could be blindsided by life’s unexpected turns.

Being Blindsided Reminds Us That We Aren’t in Control

A few months ago my precious wife got the dreaded call from her doctor about her yearly mammogram. She has been battling cancer ever since. Less than a year ago, my nephew, in the midst of a well-planned and successful life, fell in his hotel room and is now paralyzed. This past week a very good friend, serving as an ambassador from a small Central American nation and instrumental in moving that country forward economically and politically, was diagnosed with lymphoma. He is now taking the chemo prescribed by his doctors. In each situation, life changed in a moment. Uncertainty in life is certain.

Even when we plan carefully and seek to manage as well as we are capable, we get knocked around.

Some would try to explain the tragedies by focusing on misapplied principles or willful sin. Others conclude that such events prove that God is either not very loving or not very powerful. A few would try to justify the futility of trying to live any sort of disciplined life by proclaiming the randomness of the various events in history. None of those options satisfy the inner longing of serious minded people. We know instinctively that there is a creator who is sovereign and that he deserves reverence and gratitude.

For what can be known about God is plain to them, because God has shown it to them. For his invisible attributes, namely, his eternal power and divine nature, have been clearly perceived, ever since the creation of the world, in the things that have been made. So they are without excuse.

It is just that we so desperately want to be in control. The blindside episodes remind us that we aren’t.

Even Joseph was Blindsided

The Old Testament patriarch, Joseph, is a great reminder that God’s purpose is not only going to be fulfilled but that the willful choices of evil men, along with the circumstances of nature, will be utilized to bring his word to pass.

Joseph was content to endure and embrace the blindsided blows, knowing that he was loved by his heavenly Father.

Joseph was loved by his father. His brothers were jealous. They conspired to kill him but compromised by selling him into slavery. He was taken away from home into Egypt and made a servant in Potiphar’s house, where his master’s wife falsely accused him of sexual abuse. In prison, he helped his fellow prisoners by interpreting their dreams but was promptly forgotten when they were released. Finally, he was called to interpret the Egyptian Pharaoh’s dream. Joseph saw an upcoming economic upheaval. He was put in charge of managing the economy, and when the brothers who had sold him came to Egypt to buy food during a famine, they were afraid of him.

When Joseph revealed he was their brother, he also revealed his perspective on the loving sovereignty of God. He explained that it was God, not them, who sent him to Egypt so that he would be there when they became hungry, for it was essential for a remnant of the family to be rescued for the purpose of God on earth. (See Genesis 45.)

Life for Joseph was about more than his comfort, plans and agenda. He saw himself as a vital part of a bigger story that would one day reveal the ultimate Savior who would save not just a remnant of Jacob’s family, but people from every tribe and family on earth. He was content to endure and embrace the blindsided blows, knowing that he was loved more by his heavenly Father than he was by his earthly father, Jacob.

He concluded that God can be trusted.

When We are Blindsided, We Can Have Confidence in Our God

God will reinterpret our personal dreams and let us participate in more than we could ever have imagined. We are not here primarily to seek our own dreams. We are here to fulfill his. When we trust him, we discover that his conscious presence makes any circumstance bearable. Being confident of his unconditional love allows us to move forward in the midst of sorrowful times. As the Psalmist so beautifully wrote:

He restores my soul. He leads me in paths of righteousness for his name’s sake.

Even though I walk through the valley of the shadow of death, I will fear no evil, for you are with me; your rod and staff, they comfort me.

None of us look forward to being blindsided by unexpected news or unplanned disruption. But we do not have to walk in fear. The same Father who gave his Son for our ultimate rescue is the one who works behind the scenes to bring his purposes to bear in our lives. We live for his glory, and that sheds a new light on everything.

Joseph’s life was a shadow of the coming Savior. Our lives are a reflection of that Savior, as we expose the darkness that dooms mankind to the light of truth and love. Rain or shine, we march forward as participants in the greatest story ever.