You are here: Home / All News / There are many more than two reasons why the protesting NFL stars are wrong, but here are just two.

The flag and our anthem represent America’s principles and ideals — not society’s departure from them. 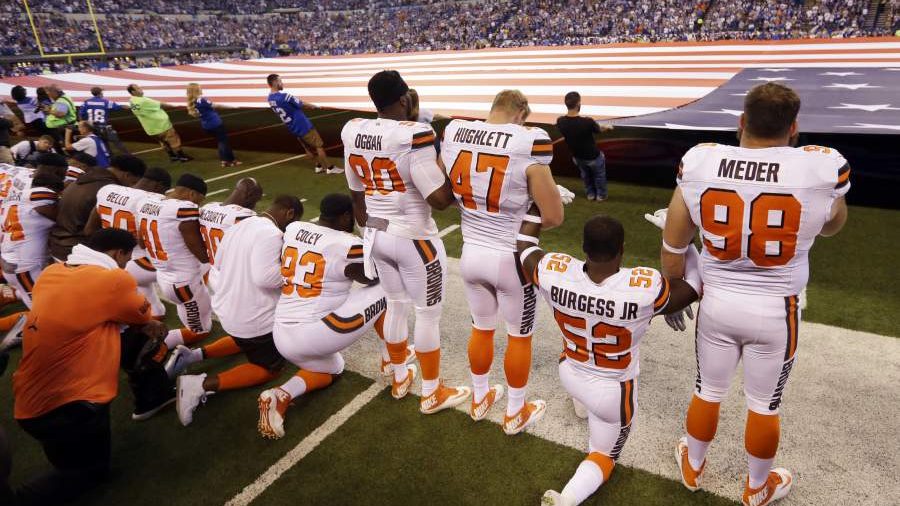 Members of the Cleveland Browns take a knee during the national anthem before an NFL football game against the Indianapolis Colts in Indianapolis, Sunday, Sept. 24, 2017.

By Christopher Corbett Published on September 25, 2017 • No Comments

Taking up chess will be more mentally strengthening than watching the NFL. But before I dust off the board, I need to leave behind two reasons I believe protesting the national anthem and the flag is a bad idea.

First, whether intentional or not, the protests target the fundamental principles and ideals of our nation. The national anthem is a poem set to music. In it, the flag is said to embody American ideals. That’s what national anthems and flags of nations do. They embody the ideals and core principles of that nation. They don’t embody the ugly departures from those ideals.

So to visibly disrespect the anthem and flag signals that you probably believe one of two things. Perhaps you don’t agree with those ideals. Or perhaps you think those ideals have been irrevocably perverted so that the flag and anthem are now a mockery of those ideals. And therefore you are disassociating your very allegiance to the nation itself.

These sports stars showing disrespect for the national anthem and the flag — stars that sadly include many who are Christians — are either confused or cowardly.

But is this reasonable? These millionaire sports stars are made rich by the social environment created by American ideals. Do they actually disagree with those very ideals?

Or perhaps it is the second reason: they believe that American ideals have been so perverted that their symbols must be rejected. But if so, how did this perversion result in their status as millionaires? How did its total loss result in the election of an African-American president? An unprecedented number of racial-minority political and corporate leaders? So many minority academicians? Integrated schools? Widespread interracial marriage? It seems farcical to make this contention.

I can personalize this. As a pro-life American, I could perhaps justify refusing to honor the symbols of a nation whose leaders have allowed the genocide of the unborn. But I don’t resort to such a protest. I believe that legal abortion is a departure from the country’s ideals. I also believe that within our system the return to those ideals is viable, not irrevocably lost. This was Lincoln’s stance regarding slavery. So despite the heartache of the partial departure of America from what it is meant to be, I will salute those ideals and principles as embodied in the flag and anthem.

Second, as a Christian, I understand that God ordained nations to give order and justice to a fallen humanity. Nations and their laws are a guard against anarchy — which is even worse than bad government. Thus, the Bible teaches me to honor the ruling authorities. (And that injunction was written during the reign of Nero). Of course, the nation is not to become an idol. But it is to be respected as a creation of God for the general good.

And so I will respect the symbols of that nation. I see the nation as representing God’s grace, despite the flaws. I will try to move it toward a more perfect alignment with God’s ideals for any nation. But unless the nation utterly transforms its symbols as representing evil (such as the Germans did with the Swastika, which I would not have honored), then I will publicly respect those symbols.

The sports stars showing disrespect for the national anthem and the flag — stars that sadly include many who are Christians — are either confused or a bit cowardly. There are no other categories for them. If they are serious about their stance, perhaps they should stop merely posturing and transfer their citizenship to nations more in line with whatever ideals they believe America lacks. Because it is the symbols of American ideals these athletes are choosing to dishonor. That’s why so many fellow citizens who might otherwise listen to their arguments are instead tuning them out.

Christopher Corbett is a communications strategist working with an array of non-profit policy organizations. He holds a degree in political science from the University of Chicago.