You are here: Home / All News / The New York Times didn’t want you to know that it is Socialism that is causing devastation in Venezuela.

Venezuela was once praised by left-wing pundits — including in the Times’ opinion section — for being a model of glowing success. 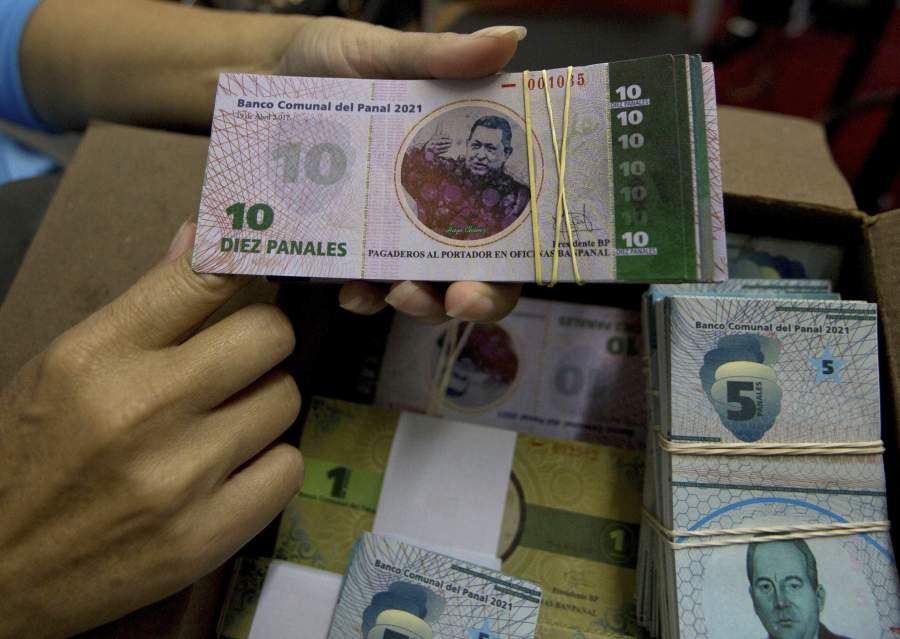 An employee counts “Panales” featuring an image of the late Venezuelan President Hugo Chavez, in the 23 de Enero neighborhood of Caracas, Venezuela, Friday, Dec. 15, 2017. Residents of the neighborhood in cash-strapped Venezuela say they’ve found a solution to a lack of paper money by creating the quasi-currency they are calling Panal, that translates from Spanish to honeycomb.

By Jarrett Stepman Published on December 21, 2017

As the Times notes, Venezuela has the largest known oil reserves in the world, yet is going through a starvation crisis exacerbated and hidden by its own government.

Common items like baby formula are almost unattainable for the average person and the crisis is deepening.

Alas, missing from the Times analysis is nearly any discussion of the reality that Venezuela is a socialist country once praised by America’s liberal elite.

In fact, only a single mention of the ruling socialist party near the end of the piece can be found.

Venezuela was once praised by left-wing pundits — including in the Times’ opinion section — for being a model of glowing success.

In fact, scoffing at claims of Venezuela’s alleged mismanagement under then-President Hugo Chávez, one New York Times contributor wrote in 2012:

Since the Chávez government got control over the national oil industry, poverty has been cut by half, and extreme poverty by 70 percent. College enrollment has more than doubled, millions of people have access to health care for the first time and the number of people eligible for public pensions has quadrupled.

Less than half a decade later, the collapse has come. Venezuelan President Nicolás Maduro, who once published an op-ed in The New York Times, has made himself a dictator as the country faces runaway inflation reminiscent of Zimbabwe.

Venezuela’s inflation spiked to 4,115 percent at the end of 2017, according to a CNN Money report, leading more than one economist to conclude that the country’s economy is in a “death spiral.”

So how did Venezuela get here?

The answer is that socialism, as always, ends with running out of other people’s money.

James M. Roberts, the research fellow in economic freedom and growth at The Heritage Foundation, wrote about how dysfunctional policies such as nationalizing industries and redistribution schemes have destroyed a once thriving country.

The private economy has been almost completely wrecked, and is now unable to meet even the most basic demands of the population.

But it isn’t just socialist policies that have led to this catastrophe. Venezuela is one of the most corrupt countries in the world and has very little economic freedom.

Roberts wrote: “Venezuela’s score in the Transparency International Corruption Perceptions Index makes it the most corrupt country in the Western Hemisphere, and helped drag the country to the bottom of The Heritage Foundation’s annual Index of Economic Freedom, too.”

As Heritage’s Latin American policy analyst, Ana Quintana, noted in The Hill, Venezuela’s leaders have managed to secure for themselves absolute power and wealth through repressive government actions and turning their country into a criminal enterprise.

Their leaders are “directly involved in corruption, the drug trade, human rights violations, and support for terrorist groups,” Quintana wrote.

For instance, the current Venezuelan vice president, Tareck El Aissami, was designated by the U.S. Treasury as drug kingpin with connections to Islamist terrorist organizations. He’s been hit with heavy sanctions by the Trump administration, but is a good example of the kinds of problems that pervade Venezuela’s government.

He’s only one of many.

Despite egalitarian socialist rhetoric, Venezuela’s ruling class has managed to both enrich itself and protect that wealth at the expense of the public.

With outright corruption rampant, promises of material care by a benevolent state can seem appealing as an alternative to “capitalism” when capitalism is simply defined as cronies in government working with cronies in big business for their own benefit.

Alas, like in George Orwell’s Animal Farm, the new overlords end up being just like the old ones, or worse.

The rule of law and a free economy have generally combined to form the secret sauce of a flourishing economy.

Lacking both, Venezuela has somehow squandered a gold mine — or oil reserves to be more literal — in its downward descent into bankruptcy, tyranny, and mass starvation. Being oil rich has only masked the deep dysfunction under the surface of the Venezuelan regime.

Perhaps this should be a sobering wake-up call to millennials who in worryingly large numbers say they’d rather live under socialism or communism rather than capitalism.

Socialism’s failures in the last century should be enough to disabuse Americans of any notion that this broken political philosophy, which runs counter to human nature, is in any way the answer to our problems.

But if history fails to be a guide, then the modern demonstration of yet another socialist country immolating itself, starving its people, and destroying any measure of real democracy should be evidence enough.

Jarrett Stepman is an editor for The Daily Signal. Send an email to Jarrett. @JarrettStepman