You are here: Home / All News / Seven things President Trump has done for Christians since he has been in office.

7 Things Donald Trump Has Done for Christians in 2017 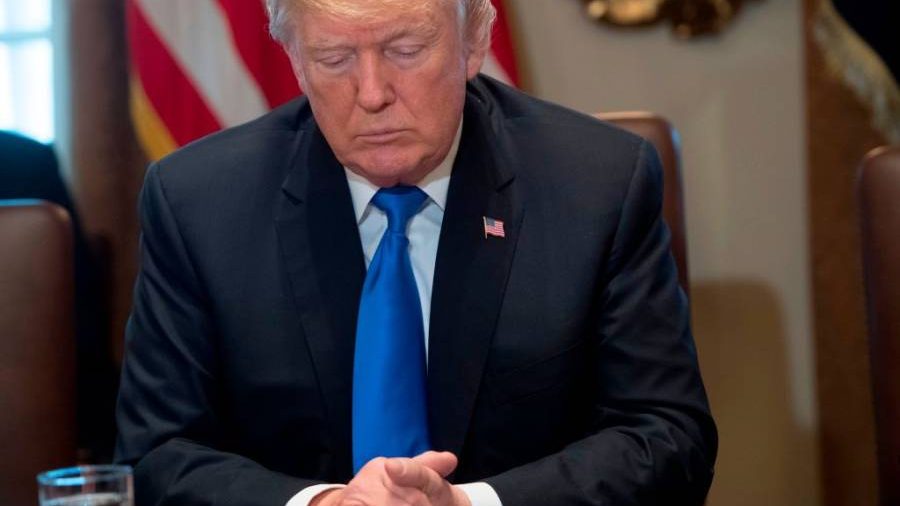 President Donald Trump bows his head during a prayer as he holds a Cabinet Meeting in the Cabinet Room at the White House in Washington, DC, December 20, 2017.

Yes, our faith is in Christ. Our hope doesn’t depend on who’s in the White House. We elect a president not a pastor. And yes, some days this President is more profane than pious.

Still, the person in the Oval Office can change the lives of Christians here and around the world. This particular President has proven to be a friend of the faithful. Here are 7 ways:

It’s no small thing that it was Donald Trump rather than Hillary Clinton taking the oath of office January 20 … no matter how many or how few people were in the crowd. While there are plenty of reasons to be grateful Hillary is plugging a book and not making policy perhaps chief among them is her hostility to views held sacred by traditional believers.

Abortion? Planned Parenthood could have set up a clinic in the Rose Garden. Gender Indentity? The “Let Men Pretend to Be Girls to Get in Locker Rooms and If You Don’t Like It Suck It Movement” would have full backing of the DOJ. Religious Liberty? Bakers and florists marked only the start.

Hillary was fond of saying “freedom of worship,” rather than “freedom of religion.” You don’t change the wording of the Constitution unless there’s a reason. “Freedom of religion” means you are free to act out your faith in the public square without government infringing. “Freedom of worship” suggests you are free to believe what you want within your house of worship — but your freedom stops when you walk out the church door.

Hillary wasn’t even willing to stop there. Her campaign plotted a revolution from inside the Catholic church.

And she made no secret about wanting to force churches to accept abortion rights and same-sex marriage rights. “Rights have to exist in practice — not just on paper,” she said in 2015. “Laws have to be backed up with resources and political will. And deep-seated cultural codes, religious beliefs, and structural biases have to be changed.”

So all told, it is a big deal Donald Trump put his hand on the Bible last January. Hillary Clinton was set to boot it onto Pennsylvania Avenue.

6. He Got Neil Gorsuch on the Supreme Court

During the election, an argument was made to conservative evangelicals queasy about Mr. Access Hollywood that voting for Trump meant voting for conservative, faith-friendly Supreme Court justices. Trump would be in office for at most eight years. Those justices would last a generation. That argument had particular urgency with the seat of Justice Scalia still open.

Trump won and true to his word, he put a conservative judge on the High Court. In fact, it happened to be the judge that ruled in favor of Hobby Lobby in its fight to avoid being forced to pay for abortive contraception. While it’s too early to see exactly how Justice Gorsuch’s presence will affect the court when it rules on matters of faith, this term has already shown a Supreme Court willing to slap down lower court decisions based on political bias rather than the law or liberty.

Meanwhile, Trump has been stocking the bench with similar conservative justices.

5. He Signed the Religious Liberty Decree and Fought the Johnson Amendment

President Trump made the defense of religious liberty and efforts to repeal the Johnson Amendment an early priority.

On the National Day of Prayer in May, he signed a religious liberty executive order allowing religious organizations greater freedom in political speech. The “Promoting Free Speech and Religious Liberty” order also gave “regulatory relief” to companies that object to the Obamacare contraception mandate.

“We will not allow people of faith to be targeted, bullied or silenced anymore,” he said. “We are giving our churches their voices back.”

Trump had vowed at the National Prayer Breakfast to “totally destroy” the Johnson Amendment. This law has been used to block religious institutions and all nonprofit entities organized as 501(c)3s to endorse political candidates. It has many a pastor and priest hesitant to speak up on political issues.

A repeal of the Johnson Amendment was in the House version of the tax reform bill. However, Democrats managed to get the repeal removed from the final version of the bill. (Though why they’d be happy about keeping faith leaders from their First Amendment rights is beyond me.)

However, even if the fight goes on, Trump gets props for raising the issue and engaging in the fight.

4. He Fought For Life

For Christians concerned about protecting the unborn, President Trump offered several hopeful signs that he’s fighting for a culture of life.

If the U.S. government says life begins at conception and its job is “serving and protecting Americans at every stage of life” then it has a duty to protect the unborn by any legal means necessary.

President Trump’s smackdown of ISIS in Syria and Iraq (and elsewhere) is more than just a military victory. It has brought relief to Christians in both countries from Islamic State’s genocide and terror.

The proof is in the holiday pudding. For the first time in three years, Christian were able to celebrate Christmas in the regions of Iraq and Syria formerly under ISIS control.

In a related vein, he’s reversed the Obama policy which seemed to work overtime to keep Christian refugees fleeing slaughter from coming to the United States. According to a Pew Research Center analysis, within the first few months of his administration, more Christian than Muslim refugees were admitted.

This one strikes very close to home. Stream founder James Robison is on the President’s so-called “faith council.” This is a group of faith leaders who meet and talk collectively and privately with the President. They offer counsel, support, and yes, a good talking to when necessary.

For lack of guidance a nation falls, but victory is won through many advisers” (Proverbs 11:14)

During the campaign pundits said Trump was just using the evangelical leaders to land the evangelical vote. Even some of the leaders suspected that once Trump was elected they’d be dispatched as quickly as Obama tossed Oprah out of the loop in 2009. Swept away like confetti. However, that has not been the case. Trump doesn’t just give photo ops to these people. He listens.

In fact, go back to the campaign. James publicly stated he was no fan of Trump’s. He was friends with virtually every other candidate, knew them to be solid Christians. In fact, a couple of the nominees are like sons to James. And when those “sons,” Gov. Huckabee and Ben Carson, announced their support for Trump, it was if they had taken their inheritance and spent it on wild living. Yet both told James the same thing: “You’re not going to believe it, but this guy listens. He listens.”

Carson’s endorsement of Trump was contingent on Trump meeting for an hour with James. With a bit of a grumble, Trump agreed. Also with a bit of grumble, but never one to pass up an opportunity to preach Christ to anyone, James agreed. James came back with the same assessment that has only grown over time: Trump listens. He is eager to hear the Word. The president wants to have Godly wisdom around him. He is humble and grateful for prayers.

What’s this mean? It means, though some days it seems far from obvious, he is listening to Godly wisdom.

1. He and His Administration Openly Pray and Praise

No one is going to mistake Donald Trump for Billy Graham. Rev. Robison suggests Trump is more like the rough and tumble Peter who preached at Pentecost weeks after loping off a soldier’s ear with his sword. A work in progress, we might say.

Yet, Trump’s words have gone beyond his enthusiasm for saying “Merry Christmas” or his stock line about Americans believing in God not government. Throughout the year, Trump has shown an openness to speak of God and his rightful role in shaping our nation. On behalf of all Americans he has called on God to bring healing to those hurt in our storms. He has spoken of the need to love one another.

At the year’s final cabinet meeting he asked Carson to lead a prayer. He prayed with his cabinet at Camp David in the days of Hurricane Harvey and Irma. Vice President Pence says he and the President pray together before major decisions.

Policy decisions are one thing. But what does it mean to have the Leader of the Free World and his cabinet pray and be humble?

Psalms tells us “Blessed is the nation whose God is the LORD” (Psalm 33:12)

So do not fear, for I am with you;

do not be dismayed, for I am your God.

I will strengthen you and help you;

I will uphold you with my righteous right hand. (Isaiah 41:10)