You are here: Home / All News / Why would a Amtrak train derail in Washington state?
close
NTSB: Too early to know many details of the derailment

An inaugural ride on a new line meant to speed train service in Washington state turned deadly Monday after an Amtrak train carrying more than 80 people derailed outside of Tacoma — causing several train cars to tumble from a highway overpass and killing at least six people, officials said.

At least 50 people were taken to four local hospitals, officials said. At least two people are in critical condition, while 11 other people are seriously injured, hospital officials told The Associated Press. At least one person was taken into surgery.

Washington Gov. Jay Inslee declared a state of emergency after Amtrak train 501 derailed around 7:30 a.m. along Interstate 5 as it was leaving the new Tacoma station. A U.S. official told The Associated Press the death toll is expected to rise and track obstruction is being investigated as a possible cause of the derailment.

President Trump tweeted Monday afternoon: “The train accident that just occurred in DuPont, WA shows more than ever why our soon to be submitted infrastructure plan must be approved quickly. Seven trillion dollars spent in the Middle East while our roads, bridges, tunnels, railways (and more) crumble! Not for long!”

“My thoughts and prayers are with everyone involved in the train accident in DuPont, Washington. Thank you to all of our wonderful First Responders who are on the scene. We are currently monitoring here at the White House,” Trump said in a follow-up tweet.

Police previously said several cars were struck by the Amtrak train cars, injuring multiple drivers on the highway. No motorists’ deaths were reported, according to Pierce County officials.

Amtrak said 77 passengers and seven crew members were on board the train, part of its “Cascades” service from Seattle to Portland, Ore. It received reports of passengers and crew members injured that were taken to the hospital. Service for two Amtrak Cascades trains were canceled.

A highway camera showed at least one train car toppled onto the road, causing a traffic jam. Photos tweeted by Washington State Patrol Public Information Officer Brooke Bova showed one detached and smashed on the ground. Another car was dangling from the overpass.

Bova told Fox News’ “Happening Now” that people are advised to avoid Interstate 5 and that clearing the area will be an “all day” process.

Kaines, the chair of Pierce Transit’s advisory board, said on Twitter, “The train has derailed. Emergency crews are on the scene. Massive damage. People are hurt.” He said the train appeared to have hit a truck, adding that the car was “destroyed.”

The train was going 81.1 mph moments before the derailment, according to transitdocs.com, a website that maps Amtrak train locations and speeds using data from the railroad’s train tracker app.

The maximum speed along the stretch of track, known as Point Defiance Bypass, is 79 mph, according to information about the project posted online by the Washington State Department of Transportation.

Wendy Simmons told Q13 Fox she arrived shortly after the derailment as people were helping the injured.

“First responders actually climbed up into the dangling cars to get people out,” Simmons said. “People were pulling first aid kits out of their cars — putting jackets on people.”

The National Transportation Safety Board said a “go-team” is departing from Washington, D.C., to investigate Monday’s derailment. The Federal Railroad Administration also tweeted it has investigators en route to the scene.

FBI officials in Seattle are also on scene for additional support, as officials told Fox News that local law enforcement are the “primary responding entities.”

The Washington State Department of Transportation said that drivers should expect long delays and avoid the area. Southbound Interstate 5 near DuPont was closed shortly after the derailment after traffic backed up for miles.

Amtrak President and co-CEO Richard Anderson said that Amtrak employees “are deeply saddened by all that has happened today. We will do everything in our power to support our passengers and crew and their families.”

Washington Sen. Patty Murray tweeted she was “heartbroken by the news.”

A map showing the new route where an Amtrak train derailed outside Tacoma, Washington.  (Washington Department of Transportation.)

Monday was the first day of schedule changes to include two new round trips between Seattle and Portland, according to the Amtrak website. Amtrak train 501 is part of the new route running between Portland and Seattle daily. The Washington Department of Transportation spent $180.7 million project on passenger train improvement project, which sped up service by removing passenger trains from a route along Puget Sound that’s bogged down by curves, single-track tunnels and freight traffic. 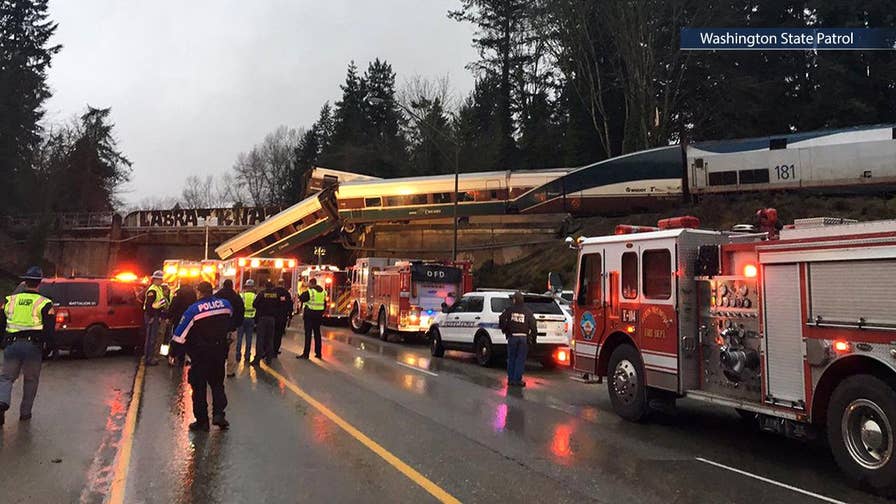 Monday’s accident came just two weeks after Lakewood mayor Don Anderson made a chilling comment saying it was only a matter of time a deadly derailment will occur, according to KOMO News.

He advocated for grade separations to protect people from trains.

“Come back when there is that accident, and try to justify not putting in those safety enhancements, or you can go back now and advocate for the money to do it, because this project was never needed and endangers our citizens,” Anderson said at the time.

The southbound lanes of Interstate 5, which see about 60,000 vehicles per day, are expected to be closed for “an extended period,” according to the WSDOT.

The derailment was Amtrak’s 26th within the U.S. since 2014, and the fourth in the state of Washington since 2014.

Fox News’ Nicole Darrah and Shira Bush and The Associated Press contributed to this report.

Katherine Lam is a breaking and trending news digital producer for Fox News. Follow her on Twitter at @bykatherinelam