You are here: Home / All News / Anarchy in Downtown Seattle Not a ‘Festive Zone’ 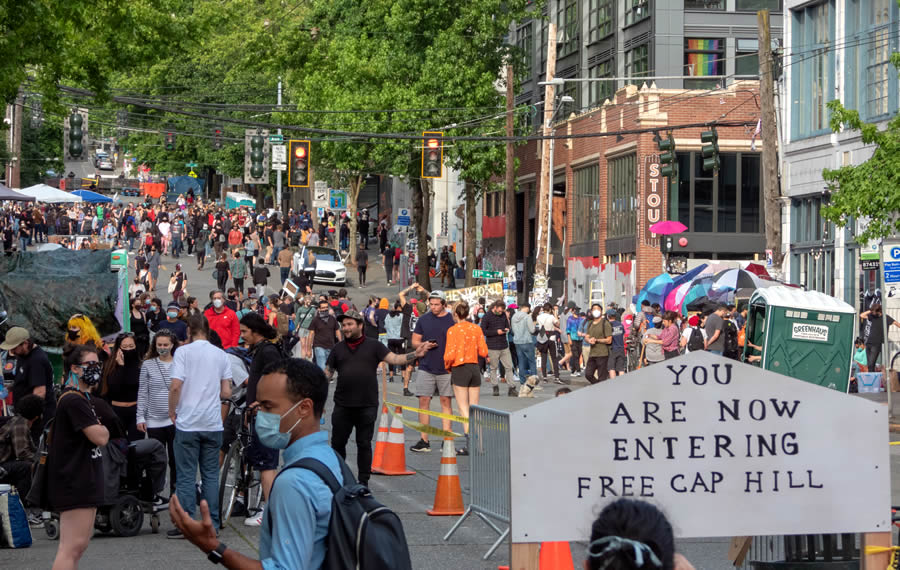 The Western entrance to the CHAZ between 10th and 11th on Pine St. 6

Most revolutions don’t end in liberty; rather, they typically end in bloodshed and merciless tyranny.

The Capitol Hill Autonomous Zone (“CHAZ”), which was created in Seattle, is being billed as a cop-free zone (or something along those lines), and is being treated by more than a few media organizations as little more than a social justice street festival.

CHAZ — now being referred to by some by a new acronym, “CHOP” — was carved out of a few city blocks surrounding the now-abandoned Seattle Police Department’s East Precinct building.

So far, Seattle Mayor Jenny Durkan and the chief of police have taken no steps to regain control of the area, which is now surrounded by various blockades.

Much of the media coverage portrays CHAZ as a sort of peaceful urban enclave where social justice activists have gathered to air their complaints about the police and racism in America.

“What has emerged is an experiment in life without the police — part street festival, part commune,” reported The New York Times. “Hundreds have gathered to hear speeches, poetry, and music. On [the night of June 9], dozens of people sat in the middle of an intersection to watch 13th, the Ava DuVernay film about the criminal justice system’s impact on African Americans. [The next day], children made chalk drawings in the middle of the street.”

The Associated Press called CHAZ a “festive zone,” and other outlets have followed suit.

Please Support The Stream: Equipping Christians to Think Clearly About the Political, Economic and Moral Issues of Our Day.

So, what exactly is the Seattle autonomous zone, and what does it stand for?

On June 8, some of the protesters drew up a list of what my colleague GianCarlo Canaparo called “foolish and dangerous policy proposals,” including abolishing courts, prisons, and the police.

The zone has a mix of peaceful occupiers and some not so peaceful ones, combining that so-called social justice street festival with the threat and occasional eruptions of robbery, property destruction, and bloodshed.

“Security, some armed, are stationed at borders fortified with metal and plastic traffic barricades,” Jason Rantz wrote at National Review. “There’s only one entrance that allows drivers, but you must first check in with CHAZ security. One protester said they monitor who comes in and out, looking for white supremacists they think may show up to start trouble.”

We’ve Seen This Show Before

There are a few historical comparisons to what’s currently going on in Seattle, a city known for its history of left-wing labor agitation dating back more than a century.

It could also be described as a kind of rehash of the “utopian” communities that were tried and mostly spectacularly failed in the early 19th century, the difference being that most of those societies were created in lightly populated rural areas.

Or perhaps the better description would be that it’s a small-time re-enactment of the Paris Commune of 1871.

The so-called communards — basically, communists — created the commune in Paris after France was defeated in the Franco-Prussian War. The independent socialist paradise lasted two blood-soaked months in which escalating starvation and violence eventually led to the French military rolling in and retaking the city.

So far at least, CHAZ appears to be less violent, but a mob is still a mob. Anarchy and radicalism tend to turn to destruction rather quickly.

The acronym name of the zone has been changed by some to “CHOP,” but what the “O” stands for in this new acronym is ambiguous. According to some reports, it stands for Capitol Hill Organized Protest, but regardless, the message is certainly ominous.

It’s not a good sign that “citizens” of the autonomous zone, if they can be called that, are drawing their own comparisons to the French Revolution.

A few people have blocked off the road in front of the precinct. Woman on the microphone says there are no bad protesters, and she is not here to be peaceful.

“You are not here to be peaceful. You are here to disrupt …”

“Does anybody know what happened to the people who did not get on board with the French Revolution?”

2,331 people are talking about this

True enough, opponents of the French Revolution went to the guillotine. So did proponents. Before the bloody reign of terror was over, even the most fervent Jacobin leader, Maximilien Robespierre, went to the chopping block to the chorus of a cheering crowd.

Such is the nature of the end of most of history’s revolutions.

The bottom line is, CHAZ — or CHOP, or whatever the autonomous zone is being called at the moment — represents a city in a state of anarchy, but that anarchy won’t continue long.

Despite claims to be above needing sordid things such as police, the CHAZ occupiers have already begun implementing enforcers to control outbreaks of violence and theft, a border to ensure that not everyone can come in and the distinction between occupants and outsiders, and some kind of rudimentary political system (specifically, a warlord in rapper Raz Simone).

They have all this while eliminating the elements of a free society that elevate us above savagery and hold back tyranny. They are missing courts (which they seek to abolish), elections, or really any kind of political or legal accountability.

An incident that took place on Sunday, as described by Christopher Rufo, director of the Discovery Institute’s Center on Wealth, Poverty, and Morality, illustrates where this experiment may be heading.

Sunday night, the CHAZ nearly erupted into a wider conflict. A man dressed in black broke into the Car Tender, a local business, allegedly stealing some items and setting the building on fire.

The shop’s owner and a heavily armed companion put out the fire and detained the alleged thief, prompting a mob of protesters to swarm the area, break down the fence, and confront the shop owners, believing a rumor that the thief was being held at gunpoint.

After a tense exchange, Raz Simone and the mob eventually chased down the alleged thief and forcibly detained him. Despite multiple calls for service, the police refused to intervene.

It’s clear that in the Seattle autonomous zone, most basic rights to life and property can’t be protected. Though CHAZ occupants say they seek justice, at least rhetorically, they have no avenue to carry it out other than through the use of raw force.

In essence, the Seattle autonomous zone is a revolutionary movement that has few safeguards to stand up to the whims of the strong or the mob.

It’s malpractice for the media to portray this development as little more than a peaceful block party.

If nature abhors a vacuum, the vacuum of anarchy is rarely replaced by liberty and justice for all.

Jarrett Stepman is a contributor to The Daily Signal and co-host of The Right Side of History podcast. Send an email to Jarrett. He is also the author of the new book, The War on History: The Conspiracy to Rewrite America’s Past.

Why is the World in Such Chaos?

MORE FROM THE STREAM

How Do We Strategize Against This Lunacy?

Idiocy in Seattle: If Only We Could Blame It On Drugs

The Spirit of Anarchy is Not From Above But From Below