You are here: Home / All News / Are there real Miracles? 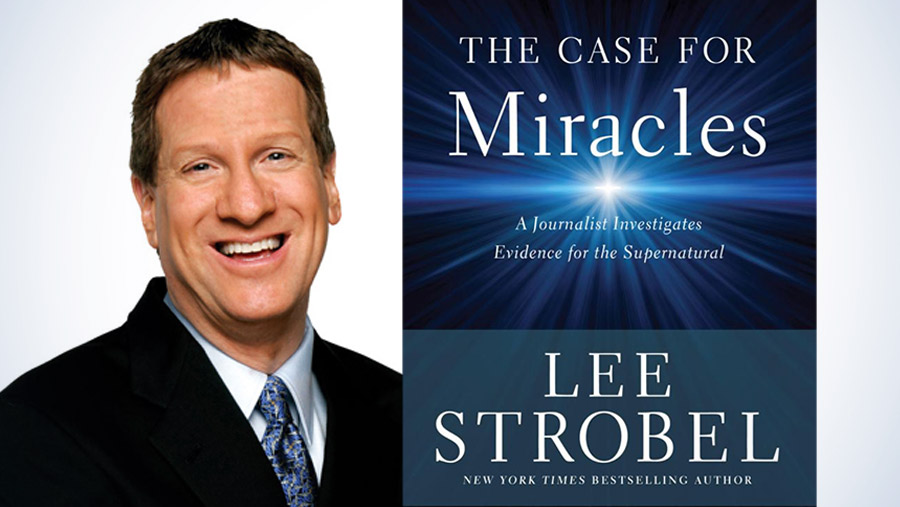 Share to Facebook5Share to EmailShare to TwitterShare to More15

Lee Strobel is best known for his book The Case for Christ, which details his immense effort to prove Jesus was not the Son of God.

He failed. And he failed for the best reason there is: You cannot prove false that which is true. Strobel began his investigations as an atheist and ended as a convinced Christian.

Strobel has a new work, this time with the happy goal of providing evidence of the miraculous. The book is entitled (sticking with what works) The Case for Miracles. On Wednesday night, Strobel held a simulcast at the World Outreach Church in Murfreesboro, Tennessee, launching the book.

He summarized his findings:

Strobel promised his audience that “by the end of tonight, you will witness a miracle.” More about this miracle (a real one) below.

He asked four important questions about the nature of miracles.

Question One: How to define miracle? There are varying opinions, but Strobel prefers the definition by philosopher Richard Purtill. “A miracle is an event brought about by the power of God that is a temporary exception to the ordinary course of nature for the purpose of showing that God has acted in history.”

Question Two: Aren’t miracles impossible because they violate the laws of nature? That’s what the (in)famous skeptic David Hume thought. Miracles are not, however, a violation of the laws of nature. They are instead interventions by God. Strobel used the analogy of him dropping an apple which you intercept before it hits the ground. You intervened. You did not violate the law of gravity.

Strobel also explained that whatever begins to exist has a cause. God, of course, never began: He always was and necessarily is. But there is certain scientific evidence that the universe started with the Big Bang; if so, this event was caused by God.

Question Three: How common are miracles today? Strobel discovered (by a poll) that nearly 40% of Americans said had they experiences that can only be explained as miracles from God. Suppose 99.9% of these accounts “are wrong and speak of merely coincidences.” That “still leaves nearly a million miracles in USA” alone.

Skeptic magazine said that “only the uneducated and the uncivilized believe in miracles.” But 55% of educated and civilized physicians say they have seen results that can only be described as miraculous.

Question Four: How can we know if a miracle is genuine? The placebo effect is real. Mistaken diagnoses happen. Fakery and fraud are ever with us; charlatans do exist. There are faulty memories and spontaneous remissions. But many healings are inexplicable except as miracles.

Some skeptics are dogmatic. They say “miracles are impossible. Period.” Other atheists, like Jerry Coyne, admit this is not a very scientific attitude and so allow the possibility of miracles. But Coyne insists on scientific evidence for miracles. Yet, “scientific experiments must be repeatable. So if someone comes back from the dead, what do you do, shoot them?”

And what about the “massive, well-documented and either replicated or independently corroborated evidence from multiple sources” about Jesus rising from the dead?

Get Up And Walk

Consider the case of Barbara Snyder, “one of most thoroughly documented cases” of modern miracles. Doctors at the Mayo Clinic diagnosed Snyder with multiple sclerosis, which she had had for many years.

Her surgeon described her as “one of the most hopelessly ill patients I ever saw.” She lost control of her bowels, had a tube in her stomach, only one working lung, hadn’t walked in seven years. Her legs atrophied. Her hands and feet withered and curled in on themselves.

Then a friend called a Christian radio program and asked the audience to pray. Many did.

Strobel showed a video clip of Snyder. She said she was lying in hospice when “all of a sudden I heard a booming loud authoritative voice, ‘My child, get up and walk!’”

She jumped up. She pulled the oxygen tube from her neck. Her feet straightened. Her hands opened. Her body took on flesh. She “started screaming and jumping up and down and thanking the Lord.”

Her doctor said what happened was “medically impossible. I have never witnessed anything like this before or since and consider it a privilege witnessing the hand of God performing a miracle.”

Strobel then produced his promised miracle.

Duane Miller was a pastor in Texas. He contracted a virus that destroyed his vocal cords, leaving him only a raspy small voice. He said there was always a hand on his throat. Sixty-three doctors, and many others at a prominent conference, examined Miller and said the nerves had been destroyed, leaving the cords covered in scar tissue. There was zero chance of recovery. He lost his job because he couldn’t speak long or well.

A friend later asked him to come speak briefly at his Sunday school. They would rig up a microphone to make it easy on him. He went. He read Psalm 103:3, [God] who forgives all your sins and heals all your diseases.

This is when Strobel pulled out his surprise. Miller’s lecture was recorded.

We hear his smoking-frog rasp as he continues to the next verse. And he redeems your life from the pit. He tells his audience, “We have all had pit experiences.”

By the end of that sentence his voice had been restored.

He struggled to continue, obviously overcome with emotion. “And I don’t understand this right now. … I’m not quite sure what to say or do. …” His astonishment and joy are obvious. “Sounds funny to say, a loss for words.”

He did his best to continue the psalm: so that my youth is renewed like the eagle’s.

The doctor who later examined him said the scar tissue was gone. The “hand” had been removed. Miller became pastor of a church again and now has a daily radio show in Dallas. “God didn’t just restore my life,” he said, “He amplified it.”

God Answers All Our Prayers

What about when prayer doesn’t seem to work, when no miracles or healings come?

Share to Facebook5Share to EmailShare to TwitterShare to More15