Speaking exclusively to Fox News’ Bret Baier on Monday outside the Department of Justice, Attorney General Bill Barr confirmed that “focused investigations” are underway that “relate to Antifa,” the far-left group that President Trump has sought to designate as a terrorist organization.

“It’s a very loosely organized group, and they have an unusual system of communication and organization,” Barr said. “There are people who can be characterized as leaders in any given situation.”

Also in the wide-ranging interview, Barr harshly criticized efforts to defund police departments, argued that some jurisdictions had gone too far in their coronavirus lockdown restrictions, and defended the U.S. Park Police’s decision to clear Lafayette Park ahead of a visit by the president — a move that came, Barr told Baier, after the attorney general himself was targeted with rocks and other projectiles.

Determining who is behind the protests has become a top priority for the DOJ, and a political football in the meantime. Former national security adviser Susan Rice has claimed “the Russians” could be involved; Minnesota officials have blamed out-of-state white supremacists, despite evidence showing that arrested individuals are overwhelmingly local. 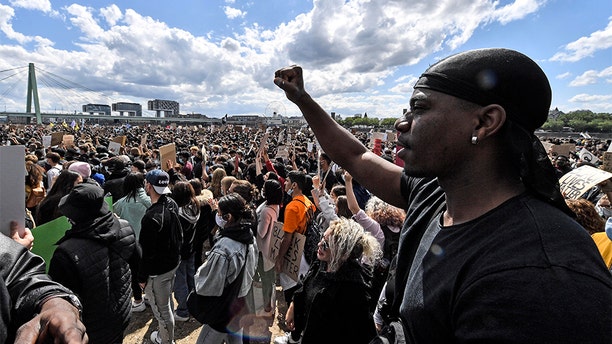 Thousands of people demonstrate in Cologne, Germany, Saturday June 6, 2020, to protest against racism and the recent killing of George Floyd by police officers in Minneapolis, USA. His death has led to Black Lives Matter protests in many countries and across the US. A US police officer has been charged with the death of George Floyd. (AP Photo/Martin Meissner)

Fox News reported last week that federal law enforcement officials are probing whether “criminal actors” are coordinating violent activities during protests over the in-custody death of George Floyd, and are looking into reports that “rocks and bricks” have been dropped off to throw at police.

“There appear to be sources of funding, and we are looking into the sources of funding,” Barr said. “And, you know, there is clearly some high degree of organization involved at some of these events and and coordinated tactics that we’re seeing. And we’re looking into that as well. And some of it relates to an Antifa. Some of it relates to groups that act very much like Antifa. As I said, there’s a witches’ brew of extremist groups that are trying to exploit this situation on all sides.”

“There’s a witches’ brew of extremist groups looking to exploit this on all sides.”

Protests near the White House, Barr observed, had become so violent that the Secret Service moved Trump to the bunker underneath the White House. The mayhem, which also included the burning of St. John’s Church and the harassment and assault of a Fox News reporter, necessitated action, Barr said — even though some media organizations have said Lafayette Park was cleared solely for Trump’s “photo-op” near the church.

“The image has somewhat been mis-created, in the sense that I haven’t seen any videos on TV of all the violence that was happening preceding that,” Barr said. “I personally saw projectiles thrown, and two were thrown at me and the police officers there. And my security detail made me move back because they said that projectiles had been landing in a certain area — things like rocks, bottles were thrown at me.”

Barr reiterated that the move to clear the park and move the White House perimeter out one block was the right one.

“As I’ve said, the president of the United States should be able to walk one block from the White House out to the ‘church of presidents,'” Barr said. “He should be able to do that. And, you know, this canard that this exercise was done to make that possible is totally false. I don’t see anything wrong with the president walking over to the church.”

Authorities initially insisted tear gas had not been used on those park protesters, before walking that statement back. 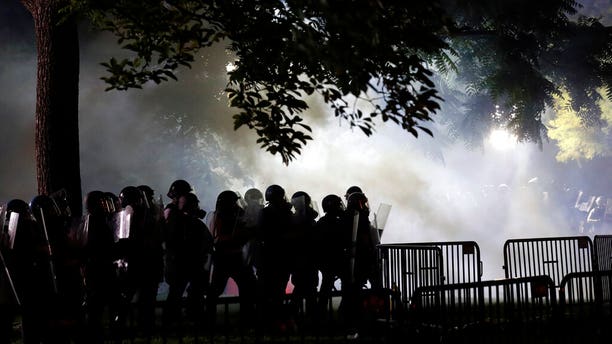 Police stage in Lafayette Park as demonstrators gather to protest the death of George Floyd, Sunday, May 31, 2020, near the White House in Washington. Floyd died after being restrained by Minneapolis police officers (AP Photo/Alex Brandon)

Demonstraters, Barr said, have become extreme not only in their actions but also their demands, including their push to defund police departments.

“Demonizing police” is “wrong” and “dangerous,” Barr asserted. “We put these individuals into highly charged, dangerous situations where their own life is at stake … and we have to make sure we treat them fairly in those circumstances.”

Barr added that it’s important to understand that there are approximately 900,000 police officers in the country, and that it would be a mistake to view all police forces as a monolith.

Should police be defunded, Barr said, “You would have increases in vigilantism and increases in chaos in the city.” Barr added it’s “been shown” that more killings would result.

Research by Harvard economist Roland G. Fryer Jr. has determined that when police pull out of communities, black deaths tend to increase. Frey also found no evidence of racial bias in police shootings.

And, Zaid Jilani wrote in The Guardian that Baltimore saw a brutal rise in murders after police pulled back there.

“We saw the police department arrest less during a period of high crime,” the Rev. Kinji Scott, a community activist “who lost a brother and a cousin to homicides in other cities,” told Jilani. “So what happened is you have a community of emboldened criminals.”

However, Lisa Bender, the president of the Minneapolis City Council, dismissed concerns from anyone worried about not having police to call — telling CNN on Monday that they were speaking “from a place of privilege.”

CAMEROTA: “What if in the middle of the night my home is broken into. Who do I call?”

BENDER: “Yes, I hear that loud and clear from a lot of my neighbors. And I know — and myself, too, and I know that that comes from a place of privilege.”

22.5K people are talking about this

At the same time, “the police chiefs, the rank-and-file officers understand the need for change and there has been great change,” Barr said.

The attorney general touted President Trump’s First Step Act, as well as his push for school choice and the creation of opportunity zones to spur investment in low-income areas.

Barr indicated that the federal government should help set standards that abolish the use of police chokeholds and similar techniques. After kneeling for several minutes, top Democrats on Monday introduced a sweeping criminal justice reform bill, which includes a limitation on police officers’ qualified immunity to certain forms of lawsuits for misconduct on the job.

Critics say qualified immunity, a judge-made doctrine, is necessary to protect police from complaints that would punish officers for reasonably executing their duties in stressful situations, or complaints intended to harass officers. Democrats charge, however, that qualified immunity is a shield for bad behavior and has enabled a culture of misconduct.

The “Justice in Policing Act of 2020” would also establish a registry of police misconduct, and would specifically allow officers to be punished for violating constitutional rights “knowingly or with reckless disregard.” The federal standard currently requires that officers “willfully” violate constitutional rights to face prosecution — a significantly higher standard of proof. 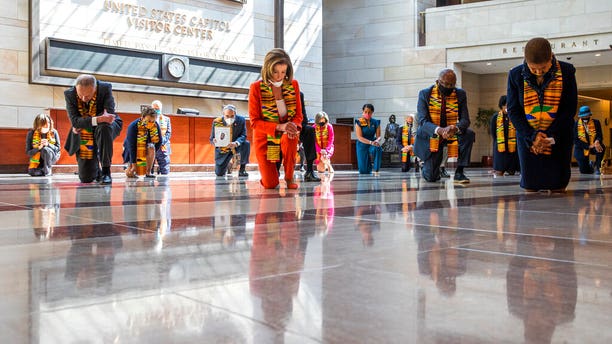 House Speaker Nancy Pelosi of Calif., center, and other members of Congress, kneel and observe a moment of silence at the Capitol’s Emancipation Hall, Monday, June 8, 2020, on Capitol Hill in Washington, reading the names of George Floyd and others killed during police interactions. Democrats proposed a sweeping overhaul of police oversight and procedures Monday, an ambitious legislative response to the mass protests denouncing the deaths of black Americans at the hands of law enforcement. (AP Photo/Manuel Balce Ceneta)

Further, the federal standard for use of force would change from “reasonableness” to situations where it is “necessary to prevent death or serious bodily injury.”

Additionally, the attorney general said, the DOJ was taking a look at jurisdictions’ approach to the coronavirus, amid widespread hypocrisy on the issue — starting from the early days of the crisis to the present. (Even the man who dressed as the Grim Reaper to condemn beachgoers is now protesting against police.) Barr’s DOJ has taken steps to fight what it perceives as potentially unconstitutional restrictions on religious worship and other gatherings.

The Trump campaign told Fox News earlier Monday that the president would soon resume his trademark rallies. The change-up follows statements by many Democrats in charge of big cities — including several who once insisted on strict quarantine measures — championing the nationwide mass demonstrations over Floyd’s death , sans social distancing.

Epidemiologists, too, have abruptly changed their tune, even though they once said lockdown measures were so important that they justified widespread unemployment and business closures.

“I think given the uncertainty involved and the very fast pace of the infection, especially in certain areas, the original 30-day or so — and even maybe with some extensions — measures were appropriate,” Barr told Baier. “But I think that as time has gone by, the degree of impingement on fundamental liberties has never been anything like this in the United States nationally, forbidding people from engaging in their livelihood, telling them to stay home. It’s just sort of a form of house arrest in many places.”

Barr added: “There have never been more pervasive or widespread limitations on American liberty than this since slavery. I’m not saying this is a form of slavery. I’m just saying that these are extremely broad limitations. And I think the time has come to restrike the balance and be more limited in what we did and more critical.”

Gregg Re is a lawyer and editor based in Los Angeles. Follow him on Twitter @gregg_re or email him at [email protected]