You are here: Home / All News / Bible-Christian.org Why are people fighting against Thanksgiving? 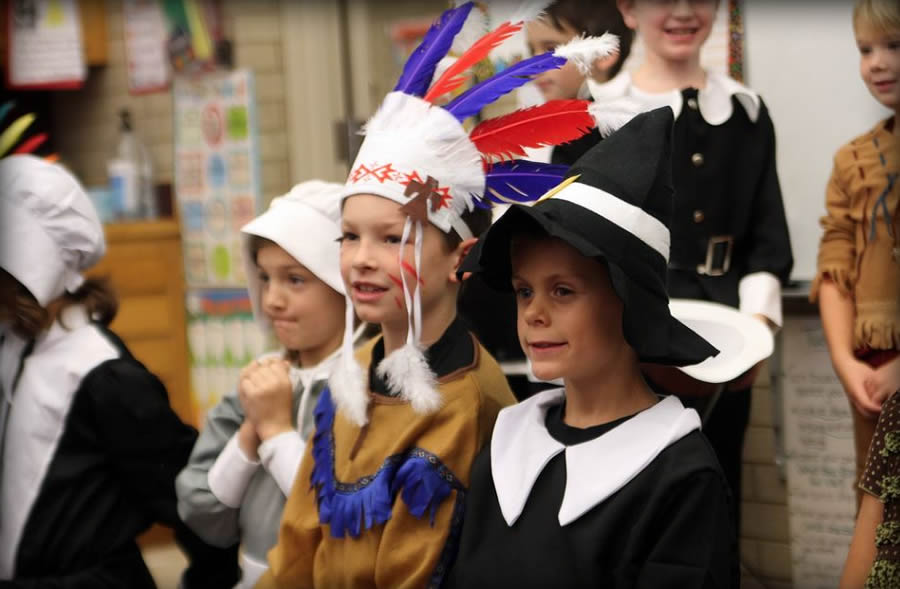 Share to Facebook13Share to EmailShare to TwitterShare to More2

You’ve heard about the War Against Christmas. Grinches try to make the holiday secular. But there’s also a war against Thanksgiving. It’s brought by extreme multiculturalists who look down on America as an oppressive imperialist project.

This war against Thanksgiving wants to remove or transform school programs where kids play Pilgrims and Indians. Those who wish to change history want programs that portray the Pilgrims as mean exploiters of native peoples.

So much for pass the drumstick.

A couple of weeks ago, Lindsey Passenger Wieck wrote an article called “Decolonizing Thanksgiving: A Toolkit for Combating Racism in Schools.” In it, she offers resources to free school children and other deceived persons from celebrating a criminal holiday. The author is an “educator of race, culture, and identity.” She’s upset over “stereotypical and racist portrayals of Native peoples” in U.S. elementary schools each November. She stressed that teachers teach students “historically inaccurate portrayals of Native peoples.” They do this through arts and crafts, books and lessons about a shared Thanksgiving meal, and songs and plays with hand crafted headdresses and vests.

Wieck is right that these children’s Thanksgiving shows are not exactly accurate. The Pilgrims maybe didn’t wear tall black hats or shiny buckled shoes. Representations of native peoples maybe aren’t so accurate either. But the events, however based on myth, celebrate gratitude and interracial harmony.

But some, like Wieck, want to replace this noble myth about the first Thanksgiving with a new darker and more modern myth based on their own dislike for America and the West. She shares a sample letter for parents to complain to schools. These letters state that Thanksgiving programs don’t “foster feelings of inclusion and belongingness for children and families from a marginalized and dispossessed group.” And they should point out that the “story of the first Thanksgiving meal is a nice story, but it is only a myth.” It is “not an historically accurate portrayal of the relationship between the European colonists and the Native Americans.”

Another sample letter from Wieck for parents urges schools to reject Thanksgiving. “[F]ind another activity for the kids to do after school.” After all, the holiday is not only “disrespectful,” but it also leaves Native nations in the past instead of celebrating them as peers.

Thanksgiving: About Social and Environmental Justice?

For schools that won’t abandon Thanksgiving, Wieck shares a way to redeem the holiday. “Ten Ways to Make Your Thanksgiving About Social and Environmental Justice” should help. This approach steers “holiday traditions to take action against racism, social injustice, and environmental degradation.”

This resource’s author recalls she became sick to her stomach after discovering Thanksgiving is really about “white supremacy.” She suggests singing songs of “indigenous resistance.” Or perhaps reading books from the Southern Poverty Law Center. Another option is advocating the release of Leonard Peltier. (Peltier is a native activist in prison for his 1975 murder of two FBI agents.) They could join Black Lives Matters. Or they could fight climate change.

Another resource from Wieck criticizes the Pilgrims. They came here to take the land away from the Native peoples and establish a new nation. They “were never concerned with ‘freedom of religion’ for anyone but themselves.” Besides, it was the Indians who provided most of the Thanksgiving food. So, the Pilgrims, besides being imperialists, were mooches too.

Wieck offers a long list of children’s books about Native American culture. No doubt some are benign and others are helpful. In contrast, she suggests no books about the Pilgrims. Most school children know as little about Pilgrim theology, culture and political struggle as they do about the Indians. She offers no resources about religion, even though Thanksgiving is about gratitude to God.

The Pilgrims were devout Calvinists. The Indians had their own rich religious system. But evidently “decolonizing” Thanksgiving largely means secularizing it to include current ideas by American mostly white Anglo secular elites who prefer to ignore almost everybody’s religion. (One suggested Thanksgiving penance resource does suggest talking with Muslims.)

Some resources ironically suggest replacing traditional Thanksgiving with advocacy for immigrants. Weren’t the Pilgrims, who fled England one step ahead of the sheriff, both immigrants and refugees? And if so, don’t they merit some sympathy? Or are Christians unworthy of empathy?

The Thanksgiving at Plymouth of course didn’t lead to nirvana. But it was a rare moment in troubled human history of very different peoples meeting in social harmony. Why not celebrate it as a model of true pluralism and cooperation? Or must any traditional story that inspires America be trashed?

Multiculturalists typically offer no substitute unifying national myths. They produce just self-serving guilt and strident political talking points. Hopefully schools and school children will ignore the Grinches who now ridicule both Thanksgiving and Christmas. These naysayers, so obsessed with resentment, would do well to consider the core of both holidays, which is gratitude, generosity and joy.

Share to Facebook13Share to EmailShare to TwitterShare to More2