You are here: Home / All News / Billy Graham influenced me when I was a youth.

Giving Thanks for Billy Graham 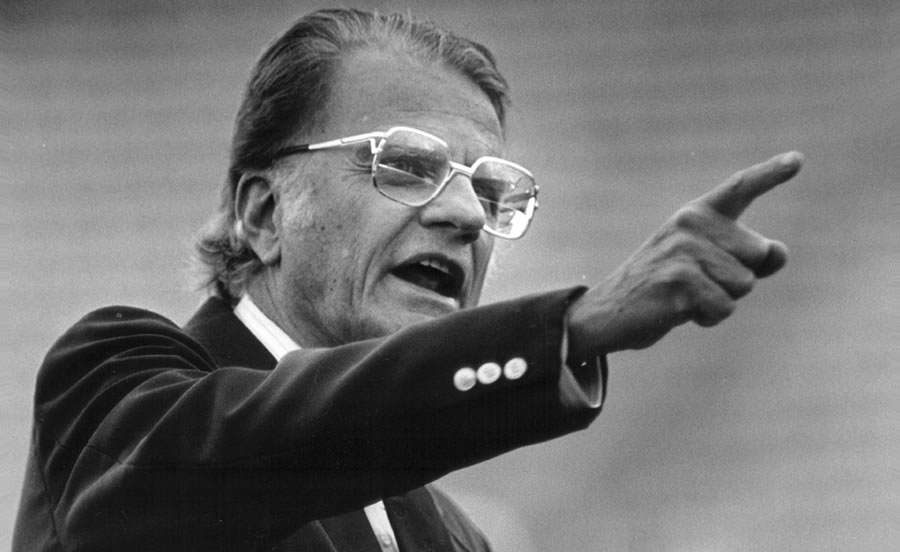 In this July 16, 1987, photo, Rev. Billy Graham speaks during a 10 night long crusade at the Mile High Stadium in Denver, Colorado

I have been giving thanks today for Billy Graham.

I am grateful that when I was a boy, He gave me an opportunity to invest in heaven. I had watched him on black and white TV and ordered the material he offered. That put me on his mailing list, and soon I received a letter asking for support for a future crusade. I got the meager savings from my piggy bank (cigar box) and sent it to help my new friend, Billy Graham. It was my first taste of the joy of eternal investments.

Through the years, when I have asked people to tell me their story, many have told how they came to faith in Jesus through the preaching of Billy Graham. I have smiled inside, knowing that I made a good investment.

I am grateful that during college days I could listen to The Hour of Decision on the radio as I drove back to campus on weekends. One Sunday night, some fellow members of the football team knocked on my dorm room door. They had been listening to the radio broadcast and wanted my roommate and me to come have a prayer meeting in their room. They had been unusually moved by Billy’s gospel message. They are still bearing fruit.

I am grateful that he was wise enough to use the media of his time to extend his ministry, but that he never let the medium of communication determine what he said or how he said it.

I am grateful that he stayed with his conviction that the bible is the final authority as it reveals the final Lord. His famous, “the bible says” was enough for him and strangely for millions who listened to him.

I am grateful that when so many other national leaders, both political and religious were falling due to personal sin, we had someone who stood to show that it is possible to be faithful amid the worst temptations.

I am grateful that he had access to our presidents and congressional leaders and that he didn’t find it necessary to tell everyone that he did. He saw himself as the servant of the God who called him and not as the hero needing adulation.

As the culture changed, his message didn’t. He lived and died believing that Jesus truly saves anyone without exception who turns to him.

I am grateful that he stayed with his message. As the culture changed, his message didn’t. He lived and died believing that Jesus truly saves anyone without exception who turns to him. And he never personally fought back when attacked viciously by some who disagreed with him. He seemed to be confident that the one who sent him would defend him.

On a personal note, I am thankful that as a young pastor in Dallas-Fort Worth area in 1971, I was privileged to serve along with hundreds of others as a counselor at the crusade in Texas Stadium. I was down there when the crowds came at his invitation to receive Christ. I saw the tears, heard the prayers, and I was privileged to follow up later many who came forward.

Like most appreciative Christians, I knew Billy Graham mostly from afar, but he seemed like part of the family. We just called him Billy. That’s what he said on that first black and white TV. “Just write me, Billy Graham, Minneapolis, Minnesota. That is all the address you need.”

I did and I am grateful for him.

Share to Facebook83Share to EmailShare to TwitterShare to More7