You are here: Home / All News / Boko Haram acts like the devil himself, and now he refuses to release a Christian teen.

The 15-year-old said she “will never become a Muslim.” So Boko Haram refuses to release her. 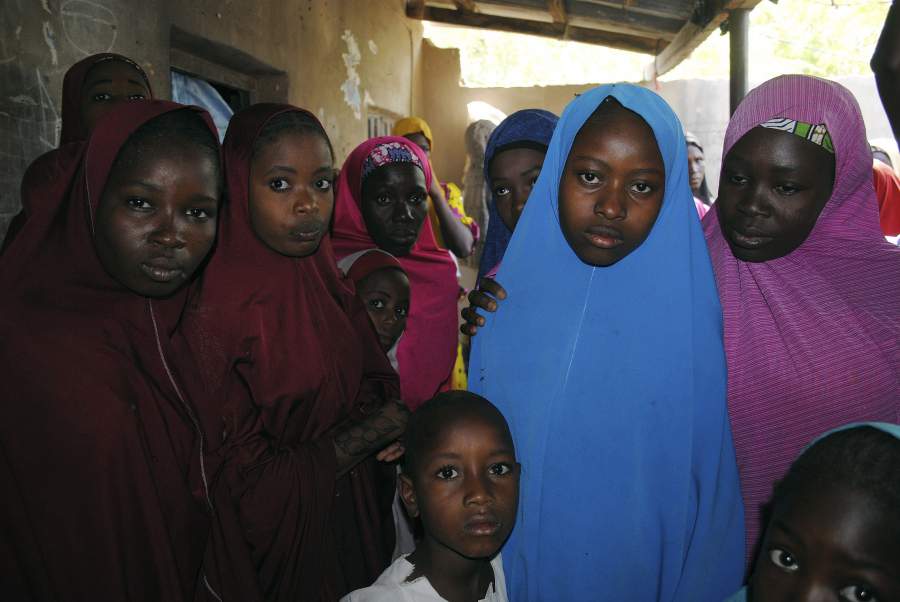 Aishat Alhaji , second, right, one of the kidnapped girls from the Government Girls Science and Technical College Dapchi who was freed, is photographed after her release, in Dapchi, Nigeria, Wednesday March. 21, 2018. Her classmate Leah Sharibu, the only Christian of the group, remains captive.

A 15-year-old Nigerian schoolgirl remains in Boko Haram captivity after the release of her classmates, International Christian Concern announced Thursday.

On Wednesday Boko Haram, whose name means “Western education is forbidden,” released almost all of the 110 girls they kidnapped from a boarding school in the town of Dapchi last month. But they refused to release one — Leah Sharibu — because of her Christian faith. The girls they released are Muslim.

The Associated Press confirmed the news, along with one girl who was released. “One girl, Leah, is still with them because she is a Christian,” student Khadija Grema told The Punch.

She added, “We were freed because we are Muslim girls and they didn’t want us to suffer. That is why they released us.”

Rabiu Sani, parent of another released girl, told the AP the captors won’t release Leah “because they want to convert her to Islam. We are all praying for her release.”

A press release from ICC included a quote from Leah’s father, Nata Sharibu. He spoke to a Nigerian radio station, saying Leah’s captors gave her the option of converting to Islam. “But she said she will never become a Muslim,” he reported. While sad she is not released, he is “jubilating” because she “did not denounce Christ.”

The AP reports that the terrorist organization released 104 girls Wednesday. While Leah is still held captive because of her faith, four of the 110 kidnapped girls are dead. Grema said they died of “stress.”

“We have seen Boko Haram sexually abuse girls, use them as slaves, and sell them to supporters and followers,” he told The Stream in an email. Many girls in captivity become pregnant. “She is also likely to experience forced indoctrination for Islam,” he added. “They will tempt her to convert so that she can be freed.”

In ICC’s press release, Johnson said Leah’s continued captivity is evidence that Boko Haram “truly despises Christians and their faith.” ICC noted that the majority of the 276 Chibok schoolgirls kidnapped in 2014 by Boko Haram were also Christian. Over 100 are still missing.

Johnson told The Stream that ICC has continuously worked with the Chibok girls’ families, including giving them farming supplies and participating in “multi-faith letters and a petition to the Nigerian government.”

“We call on the Nigerian government to act swiftly to secure the release of Leah and the remaining missing girls from Chibok,” Johnson said in Thursday’s press release.

What You Can Do

Both Leah and the missing Chibok girls need urgent prayer. Johnson asked people to pray for their physical and emotional safety. “They will also need prayer to remain faithful, as they will have been mistreated and Boko Haram will try and force them to convert.”

For families of the missing Chibok girls, Johnson said to pray “they keep hope alive. It has been nearly four years since their girls were taken and many are doubting that they will ever see their daughters again.”

In addition to praying, Johnson asked people to “raise awareness of Leah’s situation.”

“None of the Chibok girls were released until after the [Bring Back Our Girls] campaign made news,” he told The Stream.

If you would like to financially assist families in similar situations, see ICC’s “Kids Care Fund” or “Save Our Sisters Fund.”