You are here: Home / All News / A British docter is fired for affirming that a human is a male or female at birth.

A British Doctor Is Fired for Affirming Biological Reality 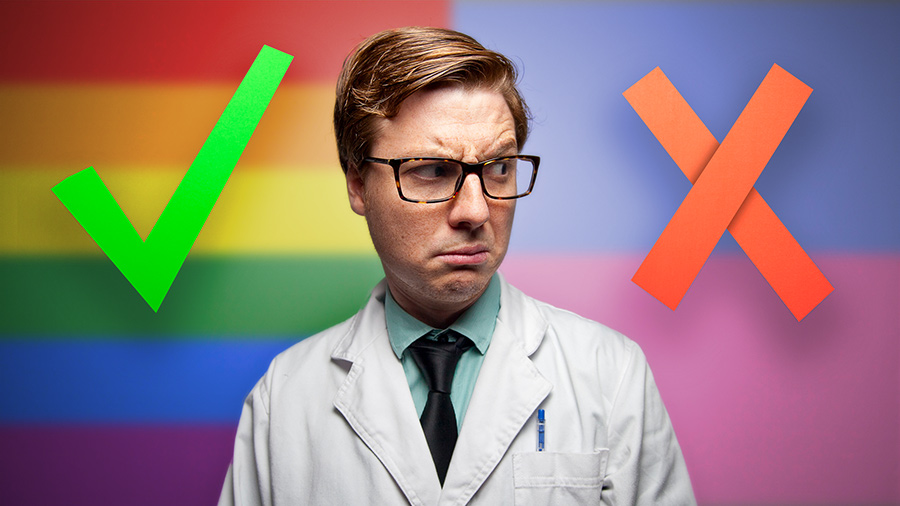 A British doctor has committed the unpardonable sin. He is guilty of medical heresy. He has transgressed the sacred lines of revisionist science. Surely a man like this must be punished.  And punished he shall be.

What exactly was the crime of Dr. David Mackereth, who had worked for the National Health Services for 26 years? He dared to affirm that sex is biologically determined. Yes, that was his terrible transgression.

As the headline in the Daily Mail states, “Christian doctor is SACKED by the Government for refusing to identify patients by their preferred gender because he believes sex is established at birth.”

What in the world was he thinking? How could be so foolish as to believe that a biological male is different than a biological female? How could he not realize that if a man perceives himself to be a woman, then for all medical purposes, “he” is now “she”?

Not only is this doctor a bigot. He is also scientifically ignorant. (I trust you will forgive my sarcasm.)

Ironically, I read this article one day after speaking with a British medical professional. She is responsible for interviewing patients when they come in for treatment, which includes people with life-threatening illnesses.

She told me that some biological males insist on being registered as females, and vice versa. What is she to do?

The doctors are not concerned with how the patient identifies. They’re not interested in knowing if the patient feels at home in his or her body. That is not their concern.

Instead, they must deal with biological realities. Males are different than females, which means that in some cases, males must be treated differently than females. To fail to recognize this is to be unscientific, irrational, and liable to medical malpractice.

So what does this caregiver do? She fills out the form according to biological realities, not internal perceptions. And in doing so, she might just be saving the patient’s life.

The sad thing, though, is that she does this without the patient’s knowledge or approval. Sadder still is the fact that she could be fired for trying to ensure the proper treatment of her patient.

As I have asked in similar contexts many times before, has the whole world gone mad?

Perception Does Not Matter

What if you truly believed you were blood type A when you were really blood type B? You’ve been in an accident and you’re being rushed to the hospital, needing a transfusion. Thankfully, you’re still conscious, and when the medic asks if you know your own blood type, you say, “Yes, I’m type A.”

As a result, you die on the operating table. You were given the wrong blood. Biology is biology. Perception does not matter.

Yes, “Men and women differ in obvious and less obvious ways – for example, in the prevalence of certain diseases or reactions to drugs. How are these connected to one’s sex? Weizmann Institute of Science researchers recently uncovered thousands of human genes that are expressed – copied out to make proteins – differently in the two sexes.”

This alone would tell you that, for medical purposes, it’s important to identify men as men and women as women. Yet when a doctor in England determined to do this very thing, he was sacked. This is beyond illogical. This is criminal.

Dr. Mackereth’s new job “would have involved compiling independent reports about the health of those he interviewed who were claiming disability benefits. But matters began to sour when his instructor said reports must only refer to the patient or client by the gender that person selfidentifies [sic] as.”

For him, this was a matter of medical integrity. Of scientific honesty. It was also a matter of his religious beliefs. As he explained, “’I said that I had a problem with this. I believe that gender is defined by biology and genetics and that as a Christian the Bible teaches us that God made humans male or female. I could have kept my mouth shut but it was the right time to raise it.”

And for raising his voice, he was fired. This is political correctness gone totally mad.

As he warned, “I don’t think I should be compelled to use a specific pronoun. I am not setting out to upset anyone. But if upsetting someone can lead to doctors being sacked then, as a society, we have to examine where we are going.”

We are facing similar issues here in the States, while in Canada, Prof. Jordan Peterson has sounded the alarm about the dangers of government compelled speech.

Now, the UK has taken things one step farther. And it is a dangerous step indeed. Will there be a pushback from the society, including others within the medical profession? Will Christian leaders raise their voices in protest? Or will the madness continue?

To be candid, at the moment, given the climate of things in the UK, I fear for the worst. Nothing less than a national awakening will turn the tide.

Share to Facebook564Share to EmailShare to TwitterShare to More30