You are here: Home / All News / Some colleges and universities are having sex ed classes.

Crazy College Courses and the Religion of Sex 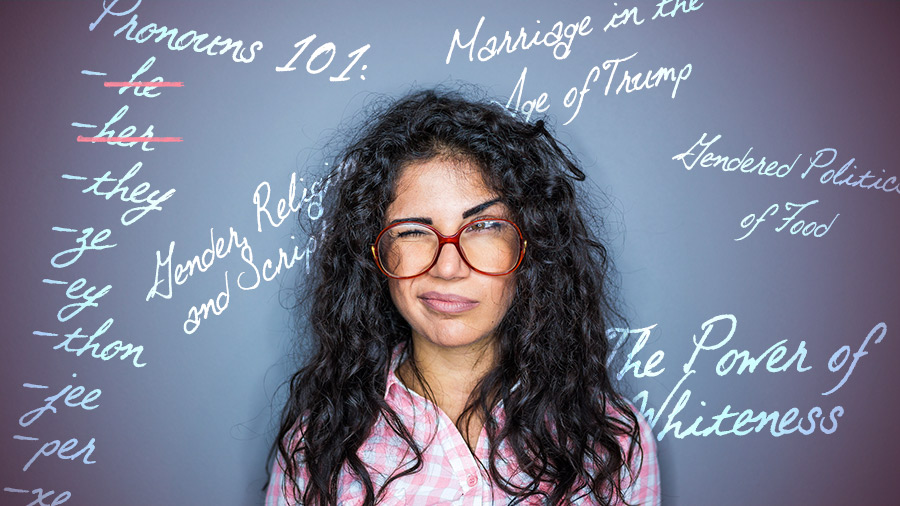 Just when you thought the state of higher education couldn’t get any lower, the Young America’s Foundation surveyed fifty major colleges to see what courses they are offering as legitimate “higher education” in the 2017-18 academic year. As is evident from a reading of the complete survey, the new religion in America— “the religion of sex”— has taken over part of the academy and made it its temple. Here’s just a small sampling of the crazy courses now being offered:

Up at Northwestern University there’s a course that typifies many being offered at campuses all over the country. It’s called Beyond the Binary: Transgender and Race. Apparently, after thousands of years of human civilization and scientific advancement, college professors have abandoned biology and just discovered that gender and race have no scientific basis. They’re teaching all this can be changed on a whim. And this is from the crowd who just ten minutes ago were asserting that sexual feelings are fixed just as race is, because “we’re born this way.”

True to the current fad, Medieval Sexuality, also offered at Northwestern, investigates the “fluidity of sex and gender roles in an age before ‘sexual orientation’; impact of and resistance to Christian theology’s negative assessment of sexuality; the cult of chastity.” Well, who could disagree with that? I mean, if only people would be less chaste in our society, then things would really get better. Right?

Indiana University is offering Topics In Gender Studies (We’re All A Little Crazy: Gender, Madness, & Popular Culture). (I wish I could tell you what this college course is about. Well, no, I don’t. The description is too profane to print.)

Not to be outclassed by Indiana, the University of Michigan is finally offering Rednecks, Queers, and Country Music. Parents have been demanding it for years! They’re also offering Drag in America (which is now a laudable way to dress up a degree).

Amherst College has constructed The Cross-Cultural Construction of Gender. Apparently this comes without correction from the biology department.

Wellesley College offers the ever-necessary Rainbow Cowboys (and Girls): Gender, Race, Class, and Sexuality in Westerns. A course like that might even earn a blush from Wellesley alum Hillary Clinton as she rides out of town.

Over at Swarthmore College you can participate in Queering God: Feminist and Queer Theology. “Key themes include: gender; embodiment; masculinity; liberation; sexuality; feminist and queer theory.” If that’s not “queer” enough for you, don’t miss Queering the Bible. Its stated goal? “By reading the Bible with the methods of queer and trans* theoretical approaches, this class destabilizes long held assumptions about what the bible – and religion – says about gender and sexuality.”

The University of Maryland offers Homophobia in the U.S. Society in the New Millennium. The stated goal is not to educate, but to activate students to take up a political crusade. Its purpose is to “focus on students’ powers and responsibilities within struggles to end discrimination based on sexuality.”

Davidson College offers Oppression & Education (which ironically is not a commentary on higher education). They also list Marriage in the Age of Trump, which has nothing to do with the kind of marriage that has perpetuated and stabilized civilization since, well, it created civilization. Instead the course examines “meanings of marriage for same-sex couples, including marriage as material right, marriage as protest, and marriage as validation.”

At the University of Georgia you’ll be asked to swallow Gendered Politics of Food and adopt a completely new method of learning by taking Feminist Research Methods.

At Ole Miss, there’s this golden oldie: Sex, Gender and the Bible. Now, there’s an obvious staple of higher learning for you!(Grandma, don’t you remember taking that course while Grandpa was overseas saving civilization from the Nazis?)

Down in Sweet Home Alabama, the University of Alabama has a course called Contemporary In(queer)ies. It’s about as bad as their football team is good. The allegedly more conservative Texas A&M calls a similar course Alternative Genders (whoop, whoop).

At University of Kentucky you can take — and I’m not making this up — Vampires: Evolution of a Sexy Monster. “This course answers the following questions: What is a vampire? Where do they come from? Why do we have an obsession with the walking dead, especially with fanged monsters?” (What employer couldn’t use a graduate with the answers to those puzzling questions?)

DePaul University answers another question puzzling society with Are We Still Fabulous?: Queer Identity in Contemporary Drama. Meanwhile, over at Providence College students with less pigmentation in their skin will learn that they are guilty for any perceived social inequality, when they take The Power of Whiteness.

They’re … urging students to abandon reality and live in their own sexual fantasy world.

The Ivy League’s Brown University is apparently proud to offer Prostitutes, Mothers, + Midwives: Women in Pre-modern Europe and North America. Or a Brown student could take Feminist Theory for a Heated Planet which, according to the description, has something to do with “the eruption of Gaia.”

Columbia University advocates personal and political action with its course on Queer Practice, That’s only to be outdone by another course at Cornell University called Nightlife, which appears to study what might or should happen at gay nightclubs.

Dartmouth is teaching The United States of Queer as well as Radical Sexuality: Of Color, Wildness and Fabulosity. (In other news, leftist sociologists remain baffled by the current wave of sexual harassment charges. What could possibly give sexual deviants justification to radically and wildly ignore traditional sexual boundaries?)

The “Women’s Gender, and Sexuality Studies Department” at Yale University is peddling Globalizing Gender and Sexuality. And the once great Harvard University (founded by John Harvard to train pastors) now offers such biblically edifying courses as Gender, Religion and Scripture and Leaning In, Hooking Up. The course will “critique ideological formations of gender, particularly as bounded by race, class, and sexuality.” Indeed, it offers “new models for sexuality” that, apparently, were beyond the provincial mind of Jesus.

And that’s only a small sample of what’s being taught at just fifty schools; it’s actually worse and more widespread than that.

You don’t have to support their dogmatic delusions.… Stop giving these schools your children and your money.

The Religion of Sex

Do you think these courses sound like elements of a quality education or more like the weekly worship services of the religion of sex? Sure, they have the ruse of education. But they are really promoting a dogmatic secularism with a kind of religious fervor intent on urging students to abandon reality and live in their own sexual fantasy world.

And the culture they help justify demands that the rest of us live in their sexual fantasy world too. Their worshippers will preach “inclusion, tolerance and diversity.” But if you fail to celebrate their fantasy they’ll immediately brand you a heretic and exclude you for being “intolerant” enough to believe that there actually is a reality outside of your mind.

While conservatives believe in changing their behavior to fit reality, today’s new liberals seem hell-bent on changing reality to fit their behavior. That will not end well for them personally or our country.

The professors who teach these courses may have the best of intentions. They may think that what they are doing is right and true (all the while declaring that truth and gender are relative). But you don’t have to support their dogmatic delusions. Parents and alumni: If you love your kids (and civilization) more than your football and basketball tickets, then stop giving these schools your children and your money.