You are here: Home / All News / What is Communism and Socialism really like?!

On Communism and Socialism, Many Americans are Still Clueless 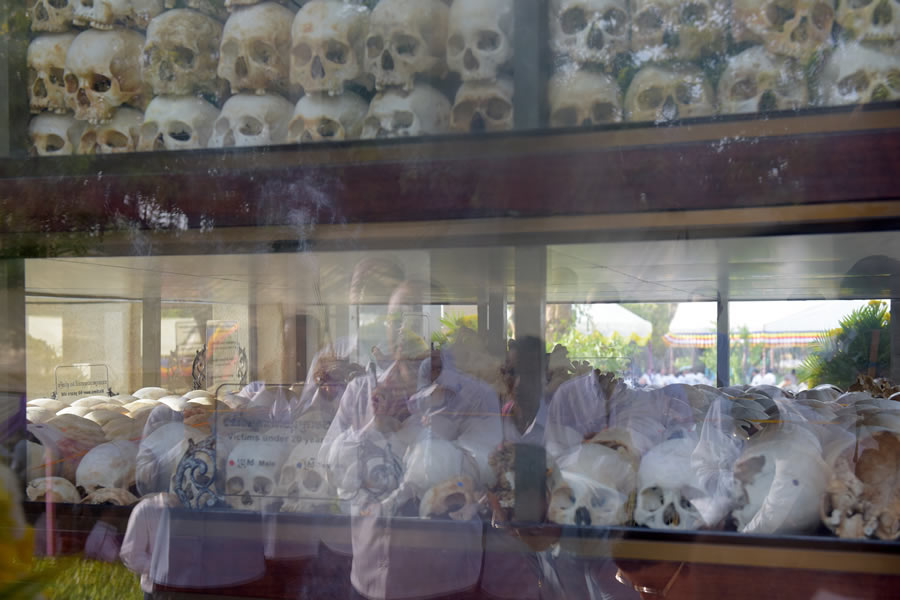 Cambodian people are reflected in the door of a building containing skulls as they pray to mark the annual ‘Day of Anger’ at the Choeung Ek killing fields memorial in Phnom Penh on May 20, 2016. More than 1,000 people watched black-clad students wielding rifles, knives and bamboo sticks to mimic Khmer Rouge crimes to mark Cambodia’s annual ‘Day of Anger’ against the genocidal former regime in the late 1970s.

Too many of us are still clueless about socialism and communism. I blame biased media and fuzzy thinking.

Walter Duranty, long the Moscow Bureau Chief for the New York Times, spent many years defending Stalinist Russia. He won a Pulitzer Prize for it. And now, in 2017, the Times has a series, called the Red Century. As Robert Tracinski notes at The Federalist, it’s mostly “a series of fond, nostalgic recollections about the good old days of twentieth-century Communism.”

Still, sometimes, the truth leaks out. Last year, The Washington Post published a long piece by Ilya Somin. It’s about the “greatest mass murderer” in the world. Take the time to read the whole thing.

Guess who wins that grim prize. Maybe Hitler? Pol Pot? Stalin? No. It’s Mao Zedong, the leader of China’s communist revolution. “From 1958 to 1962,” Somin notes, “his Great Leap Forward policy led to the deaths of up to 45 million people — easily making it the biggest episode of mass murder ever recorded.” Let that sink in. In under five years, a government led by one man murdered 45 million of its own people.

Scholars have long known the basic stats. But historian Frank Dikötter has shown that the number is larger than previously thought. And many more of the deaths were deliberate, rather than “just” the outcome of bad policies that led to famine. Millions were tortured to death, often for minor crimes like digging up a potato.

Alas, the delusion goes far beyond the media. Millennials don’t seem to know what the word socialism means. And even many who grant the evils of communism still try to defend socialism. Have a look at the comments on Ilya Somin’s piece about Mao Zedong. Over and over, readers chastise him for calling murderous Mao a “socialist” rather than a “communist.”

Lots of people seem to think “communism” just means “bad socialism.” But that ignores the meanings of words and Marxist theory itself.

Here’s a brief primer: Marx and his disciples claimed that “capitalism” must give way to “socialism,” where private property would be abolished and an all-powerful state would own everything on behalf of the people. That’s what Marx meant by the word socialism, and that’s the main dictionary definition.

This was only supposed to be a stage, though, not the end of all our strivings. At some point, under socialism, people would lose their silly fondness for property, family, religion, and other evils. A “new socialist man” would emerge and then the state would “wither away.” Everyone would enjoy peace, prosperity, and the brotherhood of man. Marx and his acolytes called that final, stateless paradise “communism.”

Here’s the point: Those regimes led by mass murderers with their gulags, death camps, man-made famines and killing fields were socialist. That’s not slander. It’s what these countries called themselves. USSR stood for the “Union of Soviet Socialist Republics.”

You gotta break millions of eggs with socialism to make the communist omelet. Socialism, you might say, was the necessary evil to reach the bliss where no state would be necessary.

That was sort of the theory anyway. In practice, socialism has just been evil. Unremitting evil, wherever it’s tried. Have a look at North Korea and now Venezuela. Socialism doesn’t lead to a higher plane of existence or a stateless utopia. It leads to a bottomless pit of immorality, poverty, and death.

Why would we expect anything different? It’s based on a false view of human nature, history, labor, property, economic value, capital, and the role of prices.

In his great Washington Post piece, Ilya Somin asks why the horror of Mao’s cultural revolution has made so little impact on thinking in the West. Part of the problem, he thinks, is that the victims were mostly Chinese peasants. They’re far removed from the culture and experience of the average American. Out of sight, out of mind.

But there’s also, he argues, “the general tendency to downplay crimes committed by communist regimes.” That tendency is on full display in the New York Times series. It’s “overall thrust,” Robert Tracinski notes, “is summed up in a call to try Communism again, but maybe this time try not to have any gulags.”

This is the old chestnut that “real” communism just hasn’t been tried yet.

Frank Fleming had the best response to this claim on Twitter:

What does it mean to say “real” communism hasn’t been tried?

It could mean that no one has tried to apply Marx’s communist theory. That’s false. Lots of folks have tried it. And the results are always horrendous.

On the other hand, it could mean that no one’s tried to implement the stateless nirvana at the end of Marx’s story. (Remember, that’s what Marx and his followers meant by “communism.”) In that case, why aren’t those who say “true communism hasn’t been tried” calling for the abolition of the state altogether?

Yet more evidence that when it comes to communism and socialism, too many Americans are still clueless.