You are here: Home / All News / Did you have your tonsils out when you were little, I did, we would have been better off without the operation.

The Institute for Creation Research 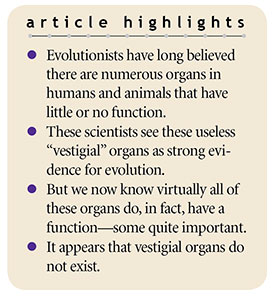 People who believe humans evolved from an ape-like animal millions of years ago claim we have many useless organs. They say these organs once had a function in our evolutionary past, and that’s why these “leftover” remnants can still be found in humans today.

One common example is the human appendix. Until recent years, most evolutionists believed the appendix was once much larger and helped us digest plant fiber, as it does in rabbits. Since it is smaller than those of some apes and proportionally smaller than those of other animals, they assumed it lost much or most of its past usefulness.

Charles Darwin first described this vestigial argument over 150 years ago. He called these structures rudimentary organs, meaning they are supposedly underdeveloped compared to those of our ape-like ancestors. The so-called useless or vestigial organs included the appendix, tonsils, wisdom teeth, coccyx (“tailbone”), thyroid, goose bumps, and those ear muscles that allow some people to wiggle their ears. Many popular books and magazines still make these vestigial claims.

Modern medical research has now found important uses for every one of these so-called useless organs.

Modern medical research has now found important uses for every one of these so-called useless organs. Yet, some biology textbooks still assert that many vestigial organs exist in humans. Even my new copy of the Encyclopedia Britannica claims that humans have over 100 vestigial organs.1 I have taught college-level anatomy for over 30 years. Of the three different anatomy textbooks I’ve used, not one has made the claim that some organ or structure is vestigial. All of them merely noted the supposed vestigial organs’ locations and functions.

Years ago, my long search for evidence of vestigial organs actually revealed many uses for each organ I studied. This helped convince me that evolution is wrong. The results became the book Vestigial Organs Are Fully Functional, which documents the functions of most of these organs and structures.2

Unfortunately, past claims that these organs are useless discouraged research into their functions. Just think of the tonsils. They lie at the back of our throats and help detect invading bacteria. In the 1930s, over half of all children had their tonsils removed, partly because doctors believed they were useless and would only cause problems later in life. Early doctors thought it was best to remove tonsils when a child was young. After more research, scientists found that tonsils help defend the body, and the number of operations fell fast. Currently, less than one in 1,000 children get their tonsils removed!

Today, doctors don’t usually remove tonsils unless a patient suffers from frequent severe infections or a breathing blockage. The removal of tonsils adds risks like severe bleeding, weakened immune systems, and infections. We now know that the operation, on average, helps very little. Plus, any benefits only last about a year. Do vestigial organs show evolution? No—vestigial organs don’t even exist!