You are here: Home / Uncategorized / Dinosaur Dilemma by Dennis Lindsay

“To many Christians the word “dinosaur” has been somewhat of an enigma, a stumbling block, because it seems dinosaurs don’t fit into the traditional view of Biblical creation. Some dinosaurs were of such size and proportion it is hard to visualize their being created along with the other animals during the six-day creation week. The brachiosaurs stood about 40 feet in the air, as high as a four-story building and weighed 90 tons. The brontosaurus ate several hundred pounds of food each day and had a footprint as big as a bathtub. The diplodocus was almost 100 feet long. The trachodon stood 20 feet tall and had 2000 teeth. The tyrannosaurus also stood 20 feet tall, had toes with 8-inch long claws and teeth six inches long. One of whose remains was found in North Texas, the pteranodon (a reptilian bird) came packaged as a plane, with wing-span of over 52 feet. 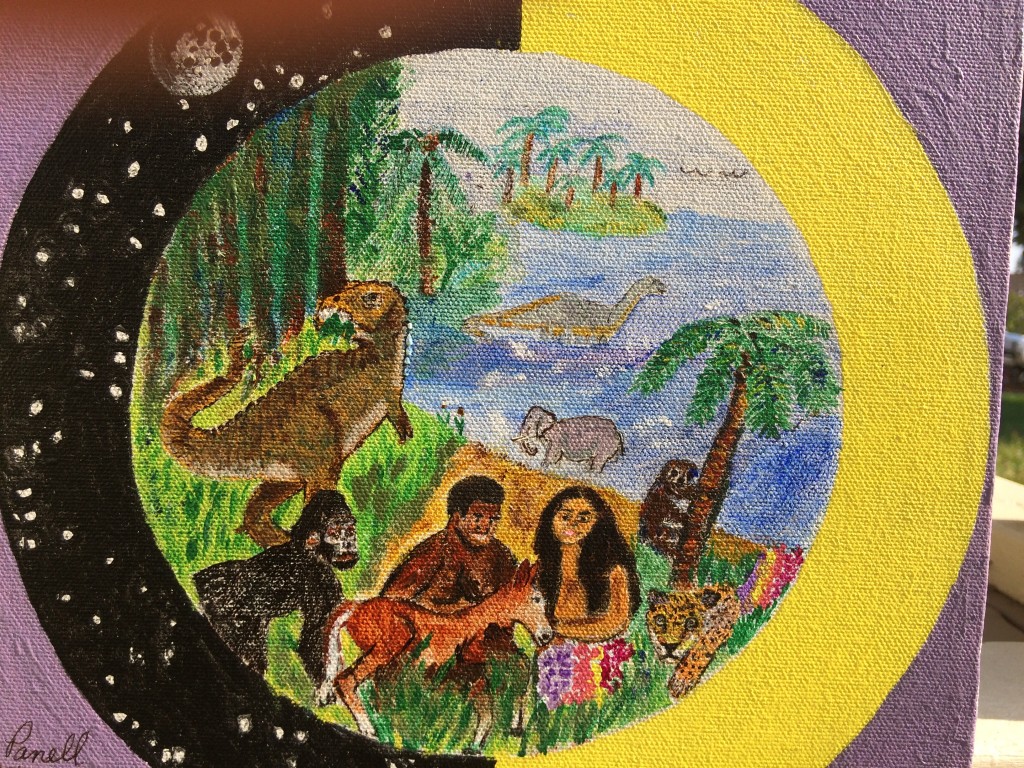 The evolutionary theory presupposes that dinosaurs evolved into existence some 200 million years ago (give or take 30 or so million), and for some mysterious reason, they became extinct about 70 million years ago.

Now, Christians have tried to accommodate the evolutionary time scale because it is assumed the evolutionary system is a well-established fact (actually it isn’t even a theory), but it is a hypothesis which is one step below a theory, supported by an incredible faith by its advocates. “Job 40:15-24 indicates that creatures fitting the description of reptilian dinosaurs lived in the Near East as late as 2000B.C. during Job’s life, (and Job lived after Noah). Some Bible scholars have ascribed such characteristics mentioned in Job 40 to that of an elephant or a hippopotamus. The problem with this is the tail. The marginal explanation in the American Standard version and the New American Standard Bible referring this beast to the hippo is clearly contradicted by the reference to his “tail like a cedar” (verse 17). The tail of an elephant, as well as that of the hippo, at best closely resembles a rope or wet noodle but not a cedar. To the contrary, the description that is given fits very closely to the artist’s rendition of the massive brontosaurus.

Scientific discovery confirms biblical revelation at this point. Near the heart of Texas, discoveries have been made at the Paluxy Riverbed on the McFall Farm outside the small town of Glen Rose. The spectacular finds include over 50 dinosaur footprints with around 15 human footprints among them. Some of the human footprints are 16 inches from heel to toe. There have been numerous certified geologists who have verified the “human prints” are genuine as were the dinosaur prints, and that they were made within days or even hours of each other.

Giant (human) footprints should not alarm the Christian because Genesis 6:4 tells us there were giants in the earth “There were giants in the days of Israel, and there are people over eight-feet tall living (in recent history), such as Robert Wadlow, the giant of eight feet, eleven inches. The dinosaur prints were authenticated years ago, however, evolutionary paleontologists have been reluctant to authenticate the human prints since the two life forms are supposed to be separated by 70 million years of geologic time, according to evolutionary theory.

Evolutionary paleontologists (men who study bones) have been negative and tried to disclaim the human tracks with every sort of conjecture. After hearing about every excuse given, it becomes very clear that the issue is not the footprints, but the issue is God. If the prints are in fact human, then the disputed parts of the Bible apparently are true. If the Bible is true, then God must exist. If God exists then man must acknowledge Him and His Word. To do this man must recognize his responsibility to God and His Word. However, man does not want to acknowledge God nor follow His Word. Man wants to be responsible to no one else but himself. Man wants to be God of his own life. Therefore, it is easier to deny God than to acknowledge God, because there are grave consequences to do such. Understand, Christianity has been rejected on philosophical grounds (personal reasons) but never on factual grounds. Evolution then has been born to justify the rejection of the biblical (account). Man rejects creation because he rejects God.

The Bible teaches that men and dinosaurs have lived contemporaneously. So far so good, but now how do we explain Job 41:18-21, which speaks of fire-breathing monsters? Sounds like something out of “Star Wars”.or maybe at best, symbolic creatures, which probably never existed. Lest we be too hasty with our conclusions, let us consider another alternative: an extinct creature that may have truly existed.

Stories of fire-breathing dragons have always been considered legends. Many legends are believed to be about things, which really did happen, although every detail in the story may not be true. It would be hard to believe that different peoples around the world could have made up the same story. For example, the story of the Great Flood has been found in over 200 accounts, among people who could not possibly have heard it from the Bible. All the details may not be exactly the same as the Bible version; nonetheless, the numerous accounts let us know there.was a flood. The stories of dragons, therefore, must have been about animals that really lived and that the biblical account may have been about such creatures. But how could such a creature generate fire? What kind of chemistry did he use to do that? To find a possible answer, let us consider other amazing creatures among God’ creation.

While I was in the Caribbean one Summer on a remote island working with Youth With A Mission, I read my Bible one evening without conventional means, no flashlight nor by the light of the moon; instead I used a lightning bug. Sound incredible? It’s true. There are many such creatures that can produce their own light from the chemistry with which God has programmed them. The electric eel can produce an electrical shock of thousands of volts. And there are numerous other examples of animals, insects and fish that can chemically produce electricity to illuminate parts of their bodies.

One of the most fascinating creatures that may help us understand how a dinosaur may have snorted fire is the bombardier beetle, given the scientific name of brachinus. He is only about one-half inch long but has a mighty weapon with which to fight off his enemies. When an enemy comes up close behind him, and explosion goes off in the face of that enemy, bad smelling gasses that shoot out from the two tail tubes at 212 degrees Fahrenheit. Can you imagine that? This beetle mixes up two kinds of chemicals which he generates, hydrogen peroxide and hydroquinone.

Now the interesting thing about this is: If you went into the chemistry laboratory and mixed these two chemicals, you would blow yourself up. The beetle simply stores the chemicals into two storage chambers and uses them when needed. Think about that! God has designed this little one-inch beetle. If that beetle can do all of this, why couldn’t a monstrous 30-feet long dinosaur have a similar kind of chemical apparatus or perhaps something even more fearful?

There are numerous dinosaurs which show they spent a lot of time both in the water and on land. These had strange, hollow, bony structures on the tops of their heads, connected by tubes to their nostrils. No one has ever determined what the hollow, bony structure was used for. Do you suppose that one of these creatures or perhaps something similar could have been the leviathan described in Job 41? It’s possible this creature could produce some chemicals similar to those used by the bombardier beetle and store them in a chamber to be used when needed.”

Another question a lot of Christians have is: “How in the world did Noah take 180,000 pound dinosaur into the Ark? And I would ask, “not how, but why would God bring a full grown 180,00 pound creature to Noah instead of a young offspring?” There was enough cargo space in the Ark to carry every kind of land species of animals (those that could not have endured outside the Ark). Also there was enough room for food, and still have about one-fourth to one-half of the cargo area empty. Our Sunday School conception of the size of the Ark needs to be updated. (Also pictures of animals boarding the Ark, hardly ever do artists depict dinosaurs going on the Ark)

“Whatever became of all the dinosaurs?” There are several solutions to this problem. Let us first remember the curse which is represented by the physical law; the second law of thermodynamics says that everything is wearing out, growing old and dying. So eventually all life will become extinct if it were not for God and His supernatural intervention. (In the past 350 years almost 400 species of animals have become extinct, presently over 300 endangered species.)

Most creationist scientists explain the extinction of dinosaurs by suggesting the weather all over the earth changed so drastically after the flood, the dinosaurs simply could no longer survive in the new world. Perhaps the lush, plenteous vegetation that covered much of the earth before the flood was unavailable after the flood. Dinosaurs are cold blooded creatures which means their body temperature is regulated by the temperature around them. Only one extended cold spell would kill them off very rapidly.

We know how quickly a species can become extinct from the story of the American bison which numbered approximately 50 to 100 million. Within about ten years, the white settlers moving west in the late 1800′ brought the bison number down to a few hundred. There have been historical accounts of dinosaurs throughout history. If we understand dinosaur in its original meaning, terrible lizard, then dinosaurs are not yet extinct; examples are the komodo dragons of Indonesia, the alligator, etc. There are continuous findings of so-called extinct species such as the coelacnth (a fish). It was reported to be extinct for 65 million years until recently when natives of East Africa were found eating the fish and had been doing so for generations. It boils down to what you want to believe in, accidental miracles or created miracles, God as God or man as god.

Who do you want to be Lord of your life? Dinosaurs should be no threat to the Christian persuasion.” These are excerpts from, “Dinosaur Dilemma”, by Dennis Lindsay taken from the November, 1982 issue of the Christ for the Nations magazine. Reproduced with permission from Dr. Dennis Lindsay.

For more information visit Answers in Genesis at www.answersingenesis.org or the Institute for Creation Research at: http://icr.org