You are here: Home / All News / From a slave to alcohol and drugs to a ‘love slave’ of Christ.

‘It’s the Gospel That Saves People’: One Man’s Journey From Addict to Pastor 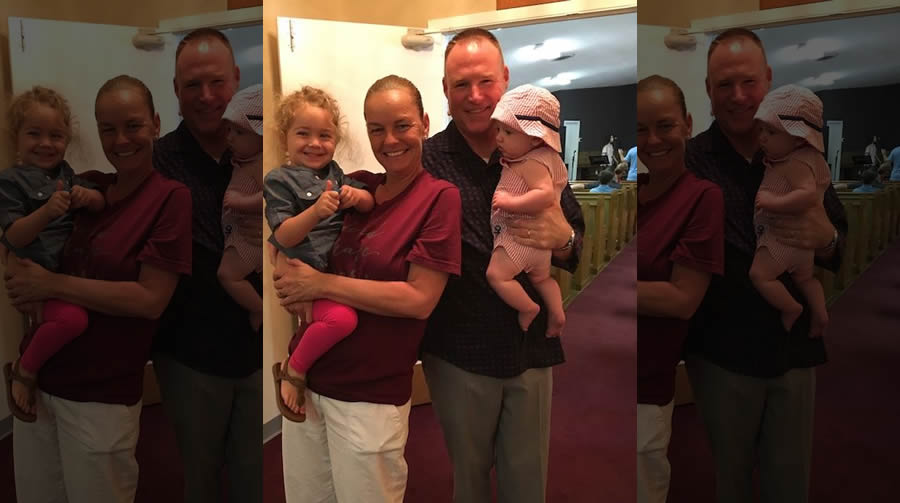 His tattoos are plain to see from the pulpit during his Sunday sermons. Pastor Eric Presgrove, former Marine, alcoholic and drug addict, leads a small congregation in a worn building in a tough neighborhood. Some might argue that he couldn’t serve God because of his past. But they’d be wrong. Now he shares God’s Word with the homeless and the imprisoned.

It’s a far cry from where he’s been.

Brought to His Knees

At 16 years old, the court ordered Presgrove to attend AA. He already drank too much. He just polished the skill when he was in the Marines in the early ’90s. There he also discovered crystal meth. His substance abuse eventually led to a bad conduct discharge.

Afterward, he crashed with drug dealers for three months. Meth was free; his habit grew worse. “I knew I had to get out of there,” he told The Stream in an interview. So he moved to Texas to work for his stepfather in a commercial refrigeration business, also working rodeo on weekends. But the rodeo was “one big party” and fueled his addictions. He started selling drugs. He quit his job, toured the rodeo circuit and met his wife in Oklahoma. She already had two daughters. “I knew we couldn’t raise these kids and sell drugs and live the life we were living.” So, they packed up and settled in Texas.

He was able to get work, but bad habits lingered. The drugs had masked his need for alcohol, so when he quit drugs, his wife realized the extent of his alcoholism. Eventually she kicked him out.

It was the fourth stint in rehab that finally brought him to his knees. After almost two decades of trying to quit drinking, he cried out to God with a desperation he hadn’t had before. “Lord, if you are who you say you are, you’re going to have to help me stop drinking,” he recalled. “I told the Lord, ‘I’ll do whatever you tell me to do and I’ll put you first.’ I’d never done that before.”

A Heart of Flesh

Two weeks later, some guys at the rehab asked him if he’d speak at their graduation from the program. When it was his turn to speak, he broke down. “I literally began to cry like a baby,” Presgrove said. “It wasn’t a normal cry. I started weeping uncontrollably. That was when God took out that heart of stone and gave me a heart of flesh. I felt the love of God for the first time in my life. From that moment, my life was changed because I knew then that I’d been saved.”

God took away his desire to drink. “He began to show me why I did the things that I did and why they didn’t work,” said Presgrove. “He spoke to me simply. He talked to me how I would understand it.” He attended a Bible study in rehab. The Bible study leader told him something that he’ll take to his grave. “You can have as much of God as you want,” said the man.

Then one of his friends from rehab ended up overdosing. Presgrove said he knew then that he was supposed to help other alcoholics and drug addicts. “After my friend died, I called [the Bible study leader]. I told him, ‘I think I’m supposed to come with you to rehab to help with the Bible studies.” At first the study leader said no, he worked alone; but after prayer, he agreed that Presgrove could come.

A God of Restoration

“After I got out of rehab, the Lord began to restore my relationship with my wife,” said Presgrove. “Why she gave me another chance, that’s only the grace of God. She said she didn’t even really want to to give me another chance. Something told her to do it.” Yet hurt remained. “She told me, ‘I’ll never love you like I loved you before.’ I prayed that God would change her heart.”

Then she got saved. “She knew that there had been a change in me. She knew that she needed that same change. … A few weeks later she was sitting at the fireplace. The Lord did the same thing to her that He did with me. He took out her heart of stone and gave her a heart of flesh. She began to love me.”

A Desire for Souls

Around the same time, Presgrove and his family took a trip to Oklahoma. “And on our way up there, out of the clear blue, I heard the Lord say, ‘I want you to start a church.’ And I told my wife and she said, ‘We don’t even go to church.’” He asked for guidance from the Lord and wound up starting a Bible study in his home. “We had about six people and it kind of grew from there.” He filed paper work to make the group officially a church on Valentine’s Day in 2011. The church moved into a rented building that same year.

At Bible college in 2012, Presgrove felt a stronger calling to lead others to Christ. “I had a desire for souls like I’d never had before in my life. I mean, all I wanted to do was tell people about Jesus.”

The desire to lead others to Christ led Presgrove to start his own ministry leading others to the Lord on the streets — the homeless and poor, the addicted and the mentally ill. “I’m drawn to the lower income people because they need hope if anybody does,” he said. He has his critics. “I’ve got people who will say, ‘How do you know they really got saved?’ And my answer to that is, ‘That’s not my job. My job is to share the Gospel. It’s God’s job to save them. If I don’t share it, then there’s no way they’re going to get saved. I have to trust that the seed I’ve sown is good and that God will do the rest. He’s the one that gives the increase.”

Presgrove and others from his church go out to a park every other Saturday to minister to the homeless through food and prayer. He helps them find homes, too.

Presgrove also has a heart for the imprisoned. He and a co-pastor go to prisons any chance they get. They worked with Prison Fellowship initially, but now work with G3 Prison Ministries. “They just call us and we go,” he said. The two now work together to minister to men in prison through a monthly chapel service and a weekly service in the men’s dorms.

“I really believe that God has called me to be an evangelist,” said Presgrove. “I know that beyond a shadow of a doubt. But I also know that He told me to start this church, too.” He looks at the church as more of an outreach than a typical church. “I believe that God wants us to have a church too, because I believe we can reach people that your average church is not going to want to reach.”

The church works on a shoestring budget. Its only funding comes from offerings. When Presgrove started the church, the Lord told him not to take on debt — so they rent a building and the pastors pay for the ministries from their own pockets. “It’s a miracle we’re able to operate,” Presgrove mused. “On paper, people think we’re crazy. But [I say] either we’re going to believe God or not.”

This Saturday the church will host an outdoor crusade. The idea is to minister directly to the homeless in an atmosphere they’ll be comfortable with. Presgrove said his vision from the Lord is freedom and deliverance for the homeless. He related the biblical story of the demon-possesssed man whom Jesus delivered. “I just got this vision in my mind, that that’s what the Lord wants to do in the homeless population. I thought, ‘Why don’t we do a crusade outside where people will feel more comfortable so they’re not forced to come into a church building?’”

“I believe that the Word will be accompanied by signs and wonders. I believe that people are going to get healed and set free. That’s kind of the vision the Lord gave me for it.” There’ll be several speakers, praise and worship music and food.

Crosswalk Church is located at 4600 Wheeler Street, Fort Worth, Texas.