You are here: Home / All News / The Gospel strategy of Billy Graham as shared with evangelist Nick Vujicic.

Born without arms or legs, Nick Vujicic has shared his testimony in 68 nations. What Billy Graham told him privately has fueled his passion for evangelism. 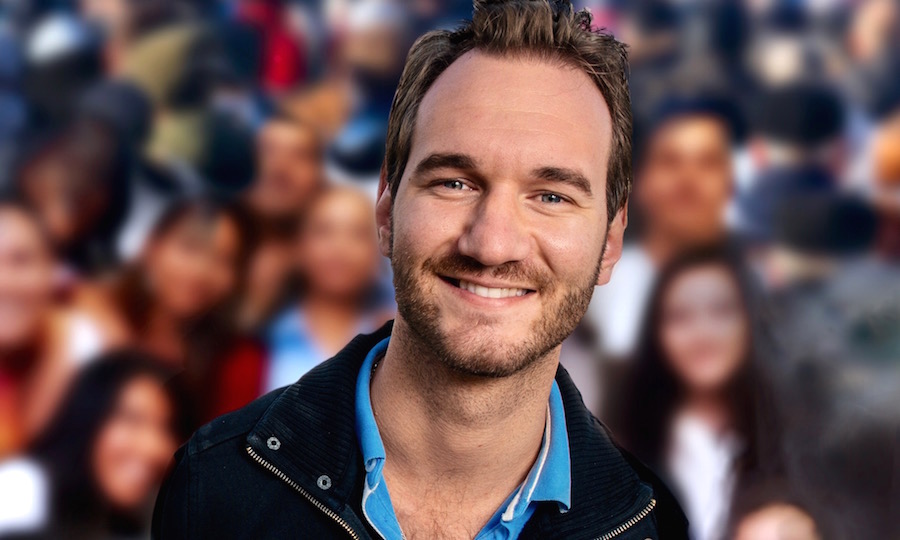 Life Without Limbs
By Josh Shepherd Published on February 24, 2018 • 1 Comment

Nick Vujicic is a man on a mission. Born with tetra-amelia syndrome, a rare disorder characterized by the absence of arms and legs, he captures attention wherever he goes. It’s a spotlight he’s used to share the Christian gospel through his ministry Life Without Limbs.

His story has opened doors for influence. Last week, Vujicic met with President Trump at an event in Florida. In his travels, the 35 year-old author and speaker has been received by 17 other heads of state. The message he shares changes little. When he spoke with Billy Graham seven years ago, it confirmed his approach.

It’s not the only thing Vujicic (pronounced “voo-yi-chich”) has in common with Graham. Last fall in California, the young evangelist preached in the largest traveling tent in North America. Every night for two weeks, Life Without Limbs ensured new converts connected with local churches. The outdoor tent outreach was reminiscent of gatherings that Billy Graham led in cities around the world.

Now based near Los Angeles, California, he shares how he found purpose despite his challenges, stories from his new book Be the Hands and Feet — and what he learned from the influential evangelist whom he looks to as a forerunner.

The Stream: This week, many have spoken of how Billy Graham impacted them. Could you share about your private meeting with Reverend Graham?

Nick Vujicic: My bride, Kanae, and I had the utmost honor of meeting with Reverend Billy Graham in his home with two of his daughters present. It was during a time in August 2011 when not many visitors were allowed. Yet his mental focus and encouragement to us as an engaged couple will be in our hearts forever.

One comment that he told me was to never preach against religions but to just preach Jesus. The gospel is powerful enough on its own. He will be missed by many and hugged by the tens of millions in heaven for the faith, courage and truth that he stood on and communicated so effectively.

The Stream: Some may think a marketing person came up with the title of your new book, Be the Hands and Feet. It’s jarring for those who know you were born without limbs. What’s the origin of that phrase in your life?

Vujicic: It was a struggle for me to find my identity, purpose and destiny. Every person doubts sometimes that God has a plan for their lives or that he could ever use them. One of the beautiful reminders is that our Heavenly Father doesn’t love us for what we do but because of the fact that we are his.

At the same time, we are his to be his hands and feet. We are to be the light and salt on the earth, to help others know that God is a loving God. He does have a plan for every human being. The first words of this book come from Saint Teresa of Ávila. Known during her life as “Mother Teresa,” she worked for decades among the poor in Calcutta.

One comment that he told me was to never preach against religions but to just preach Jesus. The gospel is powerful enough on its own.

That’s basically the bottom line. God can use you, and it has nothing to do with what you have or don’t have. It’s about saying, Here I am, send me.

Hope and Challenges Ahead

The Stream: You express such a passion for Christian unity. In your travels, are there examples you’ve seen of churches working together?

Vujicic: In Slovenia [in central Europe], there were 17 partisan churches that had never worked together. Then this American-born missionary, Steve Telzerow and his wife Barbara, initiated something. They asked forgiveness from another pastor. Steve washed his feet, bringing restitution. It really began this partnership of the brotherhood.

They brought those 17 churches together. Today, they monthly meet, pray and fast together. They brought our ministry there to preach the gospel (see video below). The large-scale meetings were all over TV there. Now when a Protestant church in Slovenia talks about the gospel, they bring out one of these tracts.

Life Without Limbs has printed up thousands with a picture of me to draw attention. “You remember that Nick Vujicic fellow?” someone will ask. Yeah, I do, I went to his event. “Remember how he talked so much about his faith? This is his faith.” That tract has become an entry point for souls hearing about Jesus on the streets of Slovenia. It all started because God moved Christian brothers to realize there are no walls between us.

Sometimes we don’t need to wait on God to bring something new. It’s that God is waiting on us to do what he’s asked us to do. When you see that nations hinge on that, it’s massive. Today, 90 percent of Slovenians have heard the gospel of Jesus Christ. We’re seeing a trail of fruit behind us of society, culture and beliefs changing.

The Stream: What challenges do you see facing the church worldwide?

Vujicic: I feel like the focus of the church has been so distracted. For those who are on the front lines, what’s most important is that the gospel is preached — nothing added, nothing subtracted.

Two continents on earth have been absolutely devastated by the prosperity gospel: Africa and Latin America. The bridge of trust between the young generation and the older generation is nonexistent. The desire to go to a church weekly, from a millennial point of view, is nonexistent generally speaking.

The giving patterns of the church are changing. Some Christians feel like they need to sound like other Christians, be it speaking or music. It’s going to come to a sobering point that is only equalized and broadened by a new calibration upon the weeping and mourning over our nation.

I feel like the focus of the church has been so distracted. For those who are on the front lines, what’s most important is that the gospel is preached — nothing added, nothing subtracted.

There is also the challenge of how we engage in the public square. Here in America, obviously I’m pro-life. I am thankful to live in a nation that spearheads human rights. We should be voices for those who are voiceless. At the same time, I speak up about a range of pro-life issues. I feel like, as Christians, before I become vocal about pro-life, I really want to see those 300,000 foster kids find a foster home first.

It’s wonderful in the next generation that there are waves of people praying for revival. It’s great to pray, but also act on it. More and more, people are putting aside what they thought was primary now to secondary. Rather, they are keeping the main thing the main thing.

The Stream: How do you navigate questions that surround healing and praying with faith?

Vujicic: The worst things that could ever happen in our lives are suffering and death. If you’re suffering, God’s grace is sufficient. If you’re dead, you’re not dead — you’re going home. When my dad had cancer, I hoped that he would be healed. But we had faith to know that God’s will would be done. God’s perfect will was that he would be taken home in 2017, at 62 years old from cancer.

Whatever it is you feel to pray for, go for it. But you must know within your heart that if God says no to that, are you OK? Are you going to trust him with all your heart?

You can’t lose when you’re with Jesus. That’s by faith — not by sight, not by feeling, not by anything else. Faith is a gift God gives us as we’re stirred up by the word of God. It’s by his grace through the Holy Spirit.

Some people I know are so fanatic. They need a root canal, and they don’t go to the dentist because they say God’s going to heal their tooth. But God uses medicine as well. God uses food. I think it all goes hand-in-hand. Be it according to your faith, for sure. But I’m never one to promise people that God is going to heal a physical attribute of their lives. Unless they heard from God directly, no one can really know.

You need to know the joy of your salvation, your relationship with your Heavenly Father. Will you acknowledge him in all your ways? Because if you do, then he will direct your paths. It may not be a path that you imagine. But as you look back, you see that all things do come together for the good for those who love him and are called according to his purposes. His grace really is sufficient.

Be the Hands and Feet by Nick Vujicic is now available online and in bookstores. Read part one of this interview for further stories from his life and ministry.