Denounce Anti-Semitism Whenever It Appears 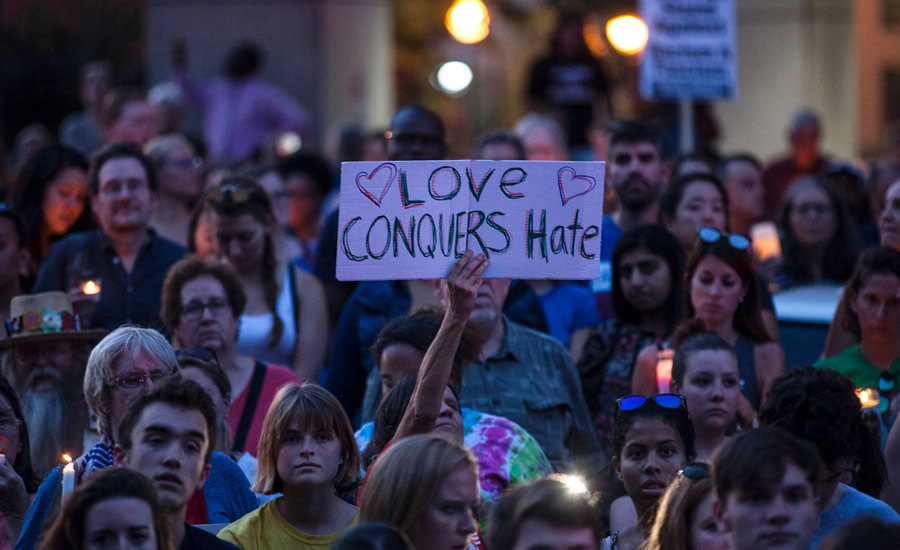 Demonstrators gather Aug. 13, 2017 before a statue of Confederate General Albert Pike, the only member of the Confederate military with an outdoor statue in Washington, D.C., during a vigil in response to the death of a counter-protestor in the Aug. 12th ‘Unite the Right’ rally that turned violent in Charlottesville, Va. A woman died and 19 people were injured in the city of Charlottesville when a car plowed into a crowd of people after a rally by Ku Klux Klan members and other white nationalists turned violent.

Most of us know what happened in Charlottesville last Saturday. Hundreds of white nationalists, alt-righters, neo-Nazis and members of the KKK descended on the Virginia city to participate in the “Unite the Right” rally. Rally-goer James Alex Fields is accused of mowing down counter-demonstrators with his car, killing Heather Heyer, a 32-year old paralegal, and injuring many others.

Anti-Semitism and other forms of racism were on display.

For decades, I’ve fought anti-Semitism. I was once asked why I dedicated my life to the cause. “I was ashamed,” I responded, “because I could not defend one Jew — my mother — against an anti-Semite. God, in His mercy, gave me a nation of Jews to defend.”

My mother came from an Orthodox Jewish background. She named me after her grandfather, Rabbi Mikel Katznelson who, along with 2,000 other Jews, were burned to death in their synagogue. She had been abused by a white supremacist and Jew-hater — my own father. He choked me and left me for dead when I was eleven years old because I had tried to defend my mother. He believed I was not his son, but the product of an affair my mother had with a Jewish man.

To confront such evil, it helps to have inspiration from heroes who have done the same. That’s why, in 1988, I purchased and restored the Corrie ten Boom house in Haarlem, Holland and turned it into a Holocaust memorial. It’s also why I built the Friends of Zion Heritage Center in Jerusalem.

And it’s why I have written many books and articles and traveled all over the world to speak and meet with leaders. In 1984, I worked with Prime Minister Menachem Begin to build support for Israel and to combat anti-Semitism. At that time, I wrote Israel: America’s Key to Survival, and produced a television special by the same name.

On June 30 of that year, a man named Richard Wayne Snell decided that he would give me a birthday present. (Snell was a neo-Nazi and part of an organization called Covenant Sword and Arm of the Lord. He was executed the same day that Timothy McVeigh blew up the Murrah Federal Building in Oklahoma City.) His gift would be my death. The ATF informed me that Snell was heading toward my home and that he had murdered two people, including a black state trooper.

Evil does not begin with gas chambers, it ends there. It begins in the hearts and minds of ordinary people who don’t speak out against evil.

The only thing they found in his car besides weapons was a slip of paper on which was written my name, home address and unlisted phone number.

This new convulsion of anti-Semitism is mostly anti-Christian. But we Christians have a history of anti-Semitism as well. At the age of four, I remember watching cartoons. At the end of the program, a Billy Graham crusade came on. My mother dashed over, snapped off the set, pointed a finger in my face and said, “Never watch that again! Christians kill Jews; Christians hate Jews! Jesus died. Don’t dig Him up. The Pope, Billy Graham and Adolf Hitler are all Christians. You are named after my grandfather who was burned to death by Christian Nazis.” That is what my mother believed.

How heartbreaking! As I grew older, I pushed my mother’s cart to the market and back home on Friday evenings. As we walked down the street, people threw eggs and tomatoes at us, screaming: “Jew witch!” The first time I was attacked, it was because they said I was a kike — a contemptuous term for a Jewish person.

How could so many churches in Germany become powerless, and even display swastikas on their altars? Why is the history of Christianity blood-stained with attacks on Jews? The Holocaust is only the most recent and deadly. The evil does not begin with gas chambers. It ends there. It begins in the hearts and minds of ordinary people who don’t speak out against evil such as we saw on display in Charlottesville.

Real Christians must speak up the very moment the demon of racism rears its ugly head. Otherwise, it’s pure hypocrisy to say they love Jesus.

Dr. Michael D. Evans is a #1 New York Times Bestselling author, award-winning journalist, commentator, minister and head of several prominent international non-profit organizations in the U.S., Netherlands and Israel, including the Friends of Zion Heritage Center and Museum. He is considered one of the world’s leading experts on Israel and the Middle East, and is one of the most sought after speakers on the subject. His book, The Visionaries, is available at www.Timeworthybooks.com.