You are here: Home / All News / Hillary and Bill may have to take cover, if this Uranium deal they made explodes on them. 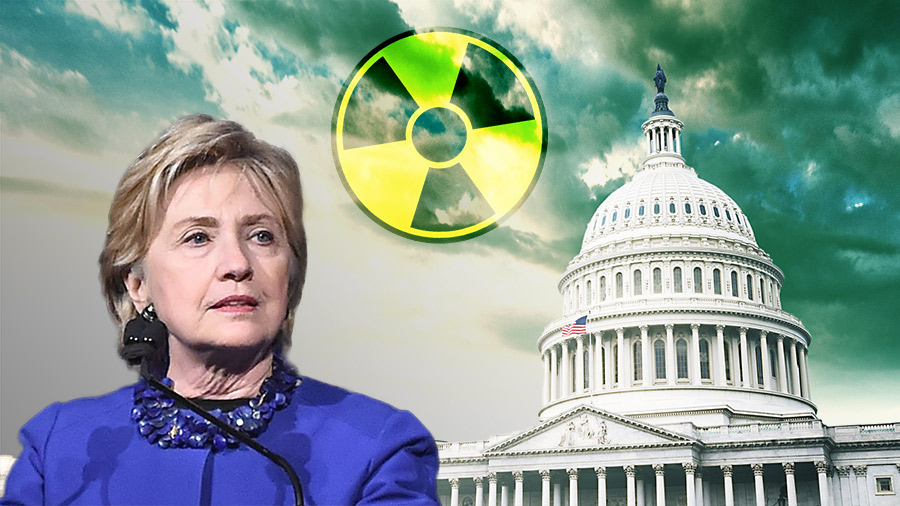 Last week’s bombshell about the Uranium One deal continues to reverberate.

The FBI kept the investigation under wraps. The FBI knew about the Putin bribery effort and didn’t bother to tell Congress. And maybe even the people on CFIUS not named Eric Holder or Hillary Clinton.

As part of that effort to gain control of the mining company Uranium One, Russian nuclear officials gave some $145 million to the Clinton Foundation. Secretary of State Clinton was then serving on the Committee on Foreign Investment in the United States, a group deciding the fate of the deal.

That sale put 20% of our nation’s uranium in the hands of Vladimir Putin.

Since the story broke that the FBI kept the news to itself, we’ve seen a string of new developments.

The lobbyist-turned-FBI informer will get to tell his story to Congress. Obama’s DOJ had threatened him with prison if he spoke up, citing a non-disclosure agreement. Attorney General Jeff Sessions announced Wednesday night he was lifting the gag order. The informant will be able to speak to the leaders of the Senate Judiciary Committee, House Oversight Committee and the House Intelligence Committee.

Both House committees had already announced they would be looking into the Uranium One deal and the Russian bribery scheme.

In the meantime, we should be praying for the safety of this informer. He’s outed both Vladimir Putin and Hillary Clinton. That’s worse than ratting on the Gambinos or Luccheses.

C-SPAN asked Hillary about the new revelations on Monday. Like Gene Simmons still spitting fire at a KISS concert, Hillary spit out the same lines she’s used for decades.

I would say it’s the same baloney they’ve been peddling for years, and there’s been no credible evidence by anyone. In fact, it’s been debunked repeatedly and will continue to be debunked.

Then she did the “Fox News, Fox News” bit.  As we know, the story was broken by The Hill. The left-leaning The Hill.

The Story’s Not Baloney

For the story to be baloney it must be true that:

Unfortunately for Hillary, the “baloney” could turn to crow. Special Prosecutor Robert Mueller is digging into The Podesta Group as part of his investigation into Russian influence on American politics.

The Podesta Group is the powerful D.C. lobbying firm founded by Hillary’s campaign manager John Podesta and brother Tony. Tony was also a bundler for Hillary’s campaign. They’re cogs in the Clinton Machine like Clayton Kershaw is a cog in the Dodgers pitching staff.

A source who worked for The Podesta Group and says he testified before Mueller’s team told Tucker Carlson a fascinating tale Tuesday. You remember Paul Manafort, who was briefly Trump’s campaign manager? He is certainly a central figure in the Russia Collusion investigation. The source says Mueller didn’t raid Manafort’s house because of his connection to Trump. He’s looking into Manafort’s work with The Podesta Group … a.k.a. Hillary’s people. Even Brad Thor wouldn’t have seen that one coming.

Manafort was acting as a liaison between Russia and the Podesta Group, helping the Podesta Group lobbying Washington officials like Hillary on behalf of the Russians. Hillary was definitely a target. According to Carlson, “Manford was clear that Russia wanted to cultivate ties to Hillary.” (For one thing, they thought she would be the next president.)

In fact, at the recommendation of John Podesta, The Podesta Group also hired a close Clinton deputy named David Adams. His job?  To lobby his old boss at State.

Uranium One was in the mix. The source told Carlson that sometime in 2013 or early 2014 a meeting included Tony Podesta and someone from the Clinton Foundation. “The explicit subject of the meeting? How to assist Uranium One.”

Between the Uranium One deal and the new revelations about her campaign’s role in the anti-Trump Russian dossier one thing is clear: Hillary Clinton is so far into this Russia business, if you cut her she’d bleed vodka.

However, we can’t lose sight of the seriousness of the situation. Even if Hillary and her machine were as pure as the driven snow, the fact remains 20 percent of this nation’s uranium supply is now controlled by Vladimir Putin.

“Oh,” you will hear some Democratic talking heads say, “It’s not like the uranium is leaving the United States.”

Not true, according to The New York Times. They reported in 2015 that Uranium One was exporting “yellowcake” out of the U.S. It’s “routinely packed into drums and trucked off to a processing plant in Canada.”

A spokesman for the Nuclear Regulatory Commission said, “to the best of our knowledge” most of the uranium sent to Canada was returned for use in the United States (emphasis mine).

Uranium One claimed 25 percent went to Western Europe and Japan.

Does either statement make you comfortable? Vladimir Putin is spreading our uranium around the world. The same Vladimir Putin who is friends with North Korea and Iran.

This is one Clinton scandal that could blow up on more people than Hillary.