You are here: Home / All News / Israel attack again, choice of weapon a knife, the enemy, an unarmed family. 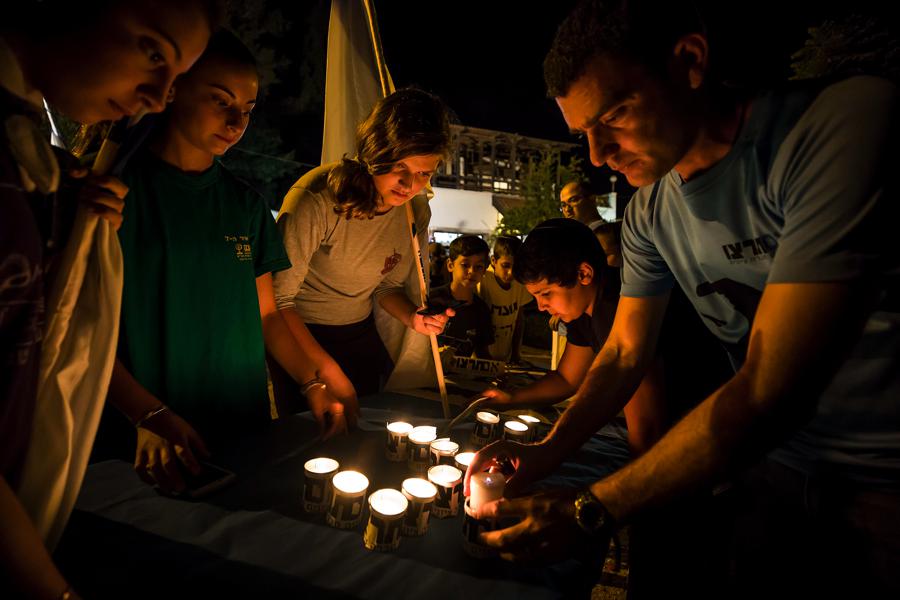 Israelis light candles in the Israeli settlement of Halamish, Saturday, July 22, 2017. Israel’s military has sent more troops to the West Bank and placed forces on high alert a day after a Palestinian stabbed to death three members of an Israeli family and Israeli-Palestinian clashes erupted over tensions at the Holy Land’s most contested shrine.

The ministers met amid mounting controversy at home, with some critics saying the government had acted without sufficiently considering the repercussions of introducing new security measures at the Holy Land’s most sensitive shrine and the epicenter of the Israeli-Palestinian conflict.

In a possible spillover of the tensions, three people, including an Israeli, were wounded by gunfire Sunday in a residential building in the heavily fortified Israeli embassy compound in Jordan’s capital. A Jordanian man later died of his wounds, a security official said.

The kingdom’s Public Security Directorate said that before the shooting, Jordanians had entered the apartment building for carpentry work, the statement said. The Israeli Foreign Ministry had no immediate comment.

The metal detectors were installed a week ago, in response to an attack by Arab gunmen there who killed two Israeli policemen. Muslim religious leaders alleged Israel was trying to expand its control at the compound under the guise of security, a claim Israel denied.

Public Security Minister Gilad Erdan, an outspoken supporter of the security measures, on Sunday for the first time raised the possibility that the metal detectors might be removed, provided an alternative is found.

He said security measures at the 37-acre esplanade, with eight entry gates for Muslim worshippers, were insufficient before the shooting attack. “We need different security measures and means for checking (those entering) there,” he told Israel TV’s Channel 2.

Erdan said it is “certainly possible that the metal detectors will be removed” if police recommend a different security program, but added that he is currently “not aware of such a program.”

Muslim leaders signaled earlier Sunday that they would reject any new proposal that leaves additional security measures in place.

The top Muslim cleric of Jerusalem, Mohammed Hussein, told Voice of Palestine radio that he demands a complete return to the security measures before the shooting attack.

In a statement Sunday, the Islamic institutions in Jerusalem, of which he is a part, said they “affirm the categorical rejection of the electronic gates and all the measures of occupation.”

Disputes over the shrine, revered by Muslims and Jews, have set off major rounds of Israeli-Palestinian confrontations in the past.

On Friday, several thousand Palestinians clashed with Israeli security forces in the West Bank and in Jerusalem after noon prayers — the centerpiece of the Muslim religious week.

Late Friday night, a 20-year-old Palestinian stabbed and killed three members of an Israeli family in their home in a West Bank settlement.

The victims were identified Sunday as Yosef Salomon, 70, and his adult children, 46-year-old Chaya and 35-year-old Elad. The elder Solomon’s daughter-in-law escaped to a separate room to shelter her young children.

Prime Minister Benjamin Netanyahu denounced the attack as “an act of terror, carried out by an animal who was incited with unfathomable hatred.”

At his weekly Cabinet meeting Sunday, Netanyahu said the killer’s home would be demolished swiftly in retribution and those who incited and glorified his act would be dealt with.

Meanwhile, Palestinian President Mahmoud Abbas confirmed that an earlier decision to freeze ties with Israel on “all levels” also included a halt to security coordination. Abbas has said the freeze would remain in effect until the metal detectors have been removed.

Security coordination, largely aimed at a common foe, the Islamic militant group Hamas, had been a constant in frequently hostile Israeli-Palestinian relations. Ending those ties could quickly escalate tensions.

The official Palestinian news agency Wafa quoted Abbas as saying that “when we made these decisions, we took a firm and decisive stance, especially with regard to security coordination.”

Abbas has coordinated closely with Jordan, the Muslim custodian of the shrine. Jordan has a peace treaty with Israel and the two countries cooperate in the battle against Islamic militants in the region, but frequently clash over Israeli policies at the Jerusalem shrine.

Jordan’s official ties with Israel remain deeply unpopular in the kingdom, which has a large Palestinian population. On Friday, thousands marched in the capital Amman in an anti-Israel protest.
__
Laub reported from the West Bank.

Copyright 2017 Associated Press. All rights reserved. This material may not be published, broadcast, rewritten or republished.