You are here: Home / All News / Keep praying for those wounded and those at the church in the Tennessee church shooting.

Praying: A Woman Killed, Others Wounded in Tennessee Church Shooting

The suspect has been identified as 25-year-old Emanuel Kidega Sampson. 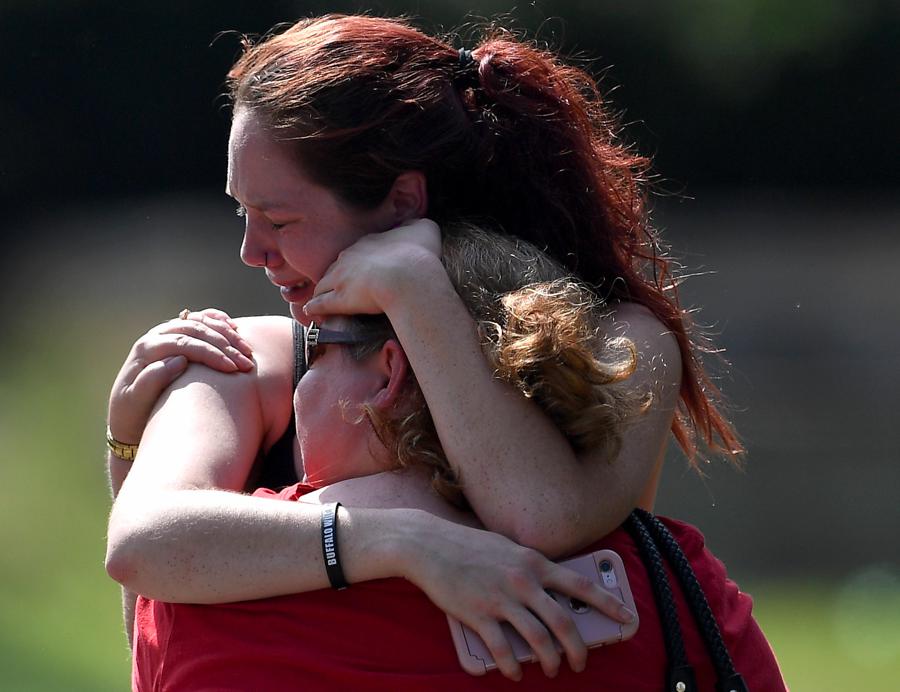 Kaitlyn Adams, a member of the Burnette Chapel Church of Christ, hugs another church member at the scene after shots were fired at the church on Sunday, Sept. 24, 2017, in Antioch, Tenn.

A masked gunman opened fire this morning at a church in Tennessee, leaving one woman dead, and several others wounded. The suspect has been identified as 25-year-old Emanuel Kidega Sampson.

The incident occurred at Burnette Chapel Church of Christ in Antioch around 11:15 a.m. local time.

Don Aaron, spokesman for the Metro Nashville Police Department, said the gunman arrived at the parking lot in a blue vehicle as services were ending.

Aaron said the suspect — wearing a half mask — fatally shot a woman who was walking to her vehicle, then entered the rear of the church, and shot six people.

22-year-old usher Robert Engle confronted Sampson and then was pistol-whipped. During an altercation, the gunman shot himself in the chest. Bleeding from his head, Engle then went out to his car to retrieve his licensed handgun, re-entered the church and held the gunman at gunpoint until police arrived. Engle is being hailed as a hero.

No motive has been revealed for the attack.

Sampson’s Facebook page  shows he posted several cryptic messages before the shootings.  “Everything you’ve ever doubted or made to believe as false, is real & vice versa, B”, “Become the creator instead of what’s created. Whatever you say goes.” and “You are more than what they told us.” The Facebook page also shows Sampson’s interest in bodybuilding and that he’s from Khartoum, Sudan. He immigrated to the U.S. in 1996.

Aaron said he was unaware of any relationship between the gunman and any members of the church.

The Church and Its Victims

The woman killed has been identified as Melanie Smith, 39, of Smyrna.

Those church members not wounded in the shooting were moved to a safe locale and were being interviewed.

Burnette Chapel Church of Christ describes itself on its website as a “friendly, Bible based group of folks who love the Lord and are interested in spreading His Word to those who are lost.”

We hope you will join us in praying for the injured, the family of the deceased, their congregation and community.