One man is killed amid clashes and arson attacks in Nairobi as Kenya awaits final results of election rerun. 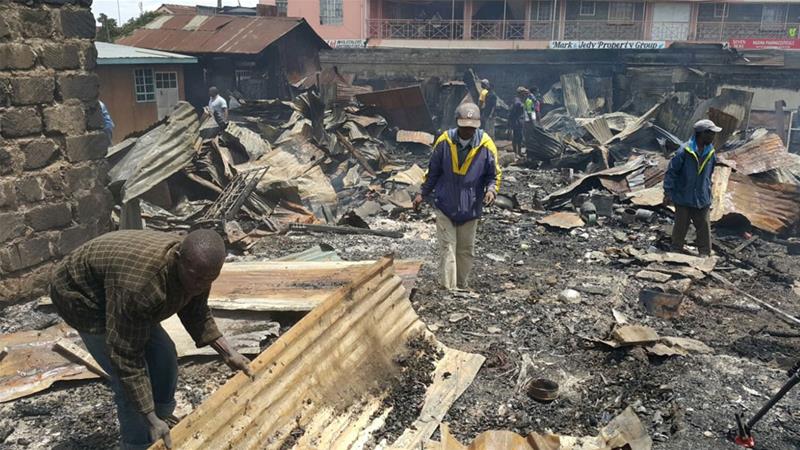 Kawangware, Kenya – At least one person has been killed and several businesses burned down following clashes between opposition protesters and pro-government supporters in the Nairobi neighbourhood of Kawangware.

There was a heavy presence of security forces in this neighbourhood in the western part of Nairobi on Saturday as groups of young men stood by the side of roads.

“I have lost everything. They came and targeted our shops. Shops owned by people that they said supported the government,” Ephantus Chege, a landlord at the Congo Market, told Al Jazeera.

“They threw three petrol bombs on the market, which burnt all the shops. I don’t have the money to rebuild anything. They left us with nothing.”

Opposition protesters have taken to the streets demanding reform of the electoral commission following the annulment of the August 8 presidential poll result by the Supreme Court.

The Nairobi-based court annulled the result because of “illegalities and irregularities” with the voting process.

Odinga called on his supporters not to take part in the repeat poll, saying it will not be free and fair.

Since Thursday’s vote, at least six people have been killed and more than 30 injured in political violence.

John Wafula, a security guard at Congo Market, said he had to run for his life on Friday night.

“They had metal bars, machetes and bottles – they were not here just to burn down businesses,” Wafula, a father of 11 children, told Al Jazeera.

“One person was killed. They killed him there on the road. People here have lost everything.”

Most businesses remained closed on Saturday despite the heightened security presence.

Kenya‘s economy has slowed down and businesses continue to pay a heavy price as the political crisis shows no sign of ending. The government had projected the economy would rise 5.7 percent in the first quarter of this year, but it only grew 4.7 percent.

Kenya vote to go ahead after block attempt fails

“Kenya is losing its competitiveness. The country has been in election mode since January. The market is on its knees and investors are staying away,” Dismas Mokua, a political-risk analyst, told Al Jazeera.

“The two leaders, Kenyatta and Odinga, need to have a dialogue and bring an end to this. They also need to tell their supporters in strong terms that violence will not be tolerated.”

As the wait for the final election result announcement continued on Saturday, traders at Congo Market called for an end to the protests.

“We want peace. We want to go back to [our] businesses and make a living,” Chege, the local landlord, said.