You are here: Home / All News / When was the last time your pastor spoke on the book of Genesis from the Bible?

What If My Pastor Avoids Genesis?

Why are Adam and Eve some of the last people to visit our churches? After all, Genesis is the starting point and foundation of God’s revelation about redemption! Well, if you really want to open doors, you need to know the stumbling blocks pastors must overcome. 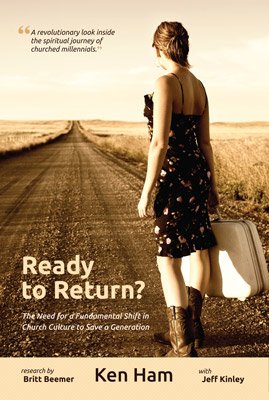 A few months ago I was in a private, frank meeting with about twenty old-earth and young-earth Christian theologians and scientists. We were discussing ways to resolve our differences on the interpretation of Genesis because we agreed that this issue is critical to the church.

At the end of our two-day discussion, an old-earth Old Testament professor expressed a deep concern: we are losing the young people in our churches by droves. A major reason, he said, is that so few pastors are preaching on Genesis.

As he spoke, I recalled Answers in Genesis’s book Already Gone, which documents and evaluates this alarming exodus of young adults from the church. I thought to myself, “One reason so few pastors preach on the early chapters of Genesis is they’re not sure what to preach.” And they don’t know what to preach because they’re confused by all the old-earth and evolutionist views—promoted by professing Christians—that contradict the plain meaning of the biblical text.

But the Old Testament scholar’s comment leads me to ask readers: Has your pastor taught through Genesis 1–11 recently, or ever? If so, he is a rarity.

Does he work to ensure that laypeople and children are equipped to defend Genesis in this evolutionized culture?

More important, does your pastor publicly stand for the literal, historical truth of Genesis (six, 24-hour days of Creation about 6,000 years ago and a global, catastrophic Flood at the time of Noah)? Does he work to ensure that laypeople and children are equipped to defend Genesis in this evolutionized culture? And does he understand—and explain to his congregation—how Genesis is foundational to the gospel? If so, he’s even rarer.

Every shepherd should be zealous to protect his sheep (Acts 20:28–32). If your pastor is standing strong, thank God for him and encourage him to keep standing strong on Genesis! Then turn your attention to family and friends in other churches who may not be so fortunate. Perhaps you can help them to help their pastors believe, teach, and defend Genesis.

Can one layperson in a church really make a difference? Before we can help, we need to understand what might be holding a pastor back. It’s not that most pastors don’t care about their sheep. But there are a number of factors that encourage them to avoid Genesis or teach some old-earth interpretation.

Why Don’t Very Many Pastors Take a Public Stand on the Literal Truth of Genesis 1–11?

Why do they remain silent on the controversy about evolution and millions of years or refuse to teach Genesis as straightforward, literal history? If pressed, they will probably insist that this issue, especially the age of the creation, really isn’t important. They think it doesn’t matter when God created, how He created, or how long He created. All that really matters is that God exists, and that we need to believe in Jesus Christ as Lord and Savior.

That’s a real problem. But how have they reached this conclusion that our views on evolution and/or the age of the creation aren’t important? Well, from my years of reading and my experience speaking in many countries, I think there are a number of possible reasons.

One is that many pastors have not explored these hot topics. They have no training in science after high school. So they don’t feel qualified or informed enough to speak out. Many of them didn’t have any instruction in Bible college or seminary on how to deal with these subjects. They were taught the “spiritual and moral truths and salvation message” of Genesis, while their professors completely ignored the elephant in the living room—the origins debate.

Many other pastors were taught one of the various old-earth views, such as the gap theory, the day-age view, the framework hypothesis, the Promised Land view, or the cosmic temple view. And if they were taught by respected, godly Christian scholars (especially those who are well trained in Hebrew), they are not sure what to think about Genesis.

It’s no wonder many pastors are hesitant to preach on Genesis.

Add to this their perception (an accurate one) that the majority of contemporary evangelical Old Testament scholars, theologians, apologists, philosophers, and prominent pastors don’t hold to young-earth creation. In fact, almost no modern Genesis commentary holds that view. It’s no wonder many pastors are hesitant to preach on Genesis.

Given their ignorance of the science (and feeling they could never have enough time to become informed) and their confusion about what exactly the Genesis text means, at least in Genesis 1, they are likely to fear losing any scientists or college or university professors in their congregation, along with their significant financial support. Many pastors don’t want to offend key church members in dealing with these touchy subjects. The fear of man (peer pressure) is not just a temptation for teenagers. We all face it, and pastors are no different.

Some pastors may be fearful of being asked scientific questions that they can’t answer. They can also be afraid of losing academic respectability and being labeled as “a flat-earth, snake-handling, Bible-thumping, fundamentalist, scientific ignoramus,” if they hold to the young-earth creation position.

Again, the main problem is that most pastors have never recognized and carefully considered the foundational issues at stake here. Few books provide pastors with clear arguments explaining why compromise on the history of Genesis 1–11 undermines people’s trust in the truth, clarity, and authority of Scripture, and ultimately undermines the foundation of the gospel itself.

The basic points are simple to explain. God’s Word asserts that Christ, our Savior and the “Last Adam,” descended from Adam and came to overcome the effects of Adam’s rebellion. Our faith in a six-day creation is based upon the same faith in the Bible’s historical account of Christ’s resurrection. (See below for helpful resources explaining the foundational importance of Genesis.)