You are here: Home / All News / The line in the sand needs to be drawn and kept! 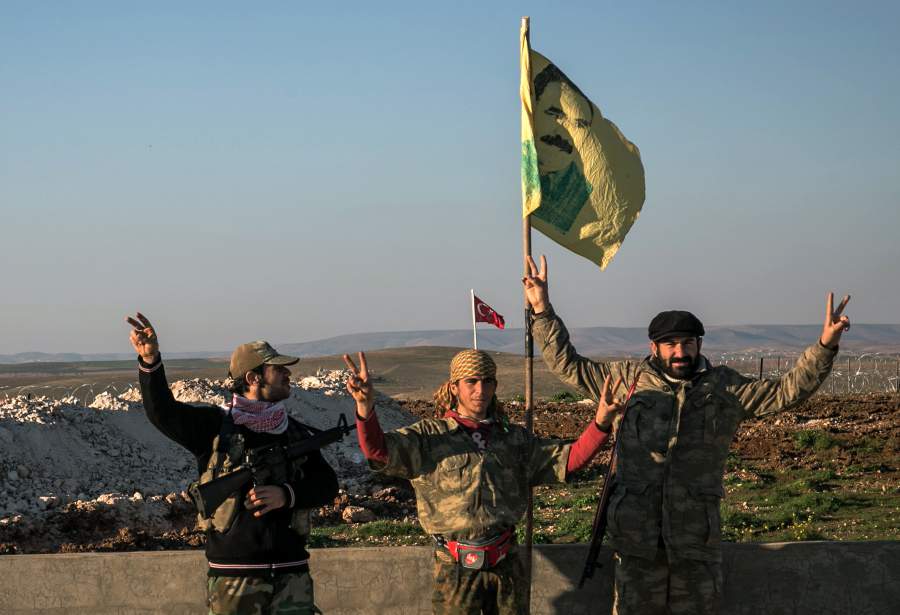 By Johannes de Jong Published on September 22, 2017 • No Comments

Stream readers might remember that for the past two years I’ve covered the fight of Syrian Christians, and their brave allies among Kurds and Arab moderates. The goals of the Syrian Democratic Forces (SDF)? Religious freedom, local control for ethnic and religious minorities, and rights for women. That’s the blessed status quo now in the Federation of Northern Syria.

But all that is in danger now. Who threatens it? ISIS is on the wane, thanks to the brave fight by freedom-loving Syrians. The new danger to Christians and other minorities in Syria comes from Iran. As the Washington Examiner reports:

On Thursday, Russia told the U.S. it “will not tolerate any shelling from the areas where the SDF [Syrian Democratic Forces] are stationed, fire from positions in regions [controlled by the SDF] will be suppressed by all means necessary.”

This follows a Sept. 16 Russian air strike against SDF and embedded coalition forces operating near the Islamic State-held city of Deir ez-Zor. The U.S.-led coalition responded to that attack, which wounded a number of SDF personnel, by pledging to “defend” the SDF against further attacks.

This showdown reflects the Russia-Iran-Assad axis effort to push the U.S. out of Syria … .

Russia and its partners know that if those forces secure the Iraq-Syria border region, they will also control the flow of goods and persons across the border. And that would endanger Iran’s primary strategic objective in Syria: moving men and materiel from Iran to Syria and then on to Lebanon. Lebanon, after all, is the home of Iran’s prime ally, the Lebanese Hezballah.

The Scramble for Syria

The scramble for control of post-ISIS Syria is well underway. When I last visited Syria, the SDF announced the start of its attack on Deir Ezzor, the last stronghold of ISIS in Syria. Now the Syrian government and its Russian allies are bombing U.S. allied forces.

Roughly 70% of Syria will probably end up in the hands of the Assad regime and roughly 30% in the hands of the Federation of Northern Syria under military protection of the SDF. Since it will take Assad’s forces a long time to take all of western Syria while the SDF will complete their mission sooner, we have a hunch of how the future map of Syria will roughly look. Below is a map that shows that picture (assuming that the chaotic Turkish pocket in the north will eventually end up in the SDF): 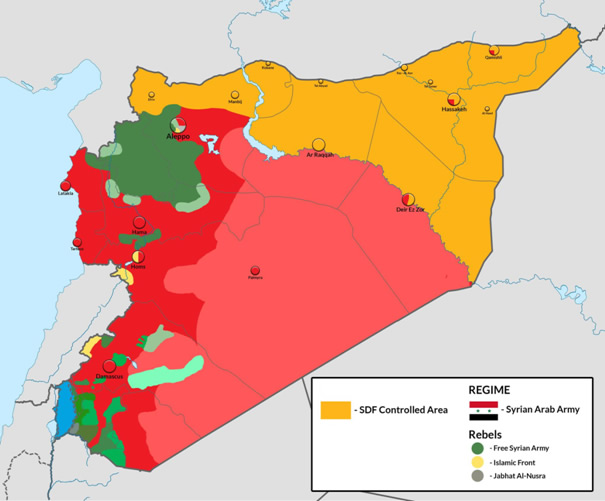 The Federation of Northern Syria is realizing the equality of women and implementing freedom of religion. It has created multi-ethnic governance where Christians are fully part of the governing bodies. Here they live not as second-class residents but as politically and militarily empowered citizens. Even converts from Islam can meet together in full freedom without persecution, as I have witnessed myself.

Will the U.S. Abandon Its Allies, Syria’s Christians?

Israel’s Prime Minister Netanyahu expressed his great concern over the growing influence of Iran over Syria when he visited the U.N. in the last week of August. He is completely right in his assessment. Iranian influence has increased significantly in Iraq and has spread across Syria. It is also obvious that this is not a good development for the region, especially for the new Christian communities that are growing in Syria. Furthermore, the growing Iranian influence is clearly a threat to Israel.

The new map of Syria shows how important the Federation of Northern Syria and the SDF are in tempering the Iranian influence. Soon they will serve as a wedge right between Iranian proxies in Iraq on the one side and Syria on the other. After the Deir Ezzor operation this will be the area that blocks the expansion of Iranian power.

Now Kurds, Sunni Arabs and Syriac Christians who form the Federation of Northern Syria and the SDF are looking to the U.S. with a great question: “Will you be with us in our struggle for freedom or will you abandon us in the hands of Iran?” Even for the Christians who will continue to live in Assad-controlled Syria it has become essential that the U.S. does not abandon the Federation. If the U.S. ditched the Federation, Assad and his Iranian allies would certainly attack the SDF and force Christians under their control to fight against other Christians. To attack a democratic government on behalf of a dictatorship.

Nevertheless, the U.S. seems reluctant to fully commit to its SDF allies on the ground. The reason is that historically one of the leading Kurdish parties (PYD) in the Federation has been linked to the PKK, an armed Kurdish militia whose members Turkey labels as “terrorists.” This historical connection has little to do with the new realities in Northern Syria. Even U.S. officials will have a hard time trying to explain how Arabs and Syriac Christians can be labeled as “PKK Kurds.”

Will Turkey Push Trump Around?

Furthermore there are other Kurdish parties involved in the Federation as well. I have seen how all ethnicities cooperate in the Federation: Arabs, Kurds and Syriac Christians. Now the question is if the U.S. will give up on the security of Israel, the existence of Syria’s Christians and the new democracy that all ethnicities created …  just because of the historical links of one Kurdish party? Furthermore the U.S. has pledged support to the new Raqqa Council that cooperates with the Federation, how then can the U.S. not commit support to the whole Federation? Will the fact that Turkey is poised to wage war against Kurds and Christians determine U.S. policy?

American Christians need to stand up and make clear to the Trump Administration that there is a need for the U.S. to clarify that it will not betray the SDF and Federation allies who sacrificed so much and fought together with the U.S. to defeat ISIS in Syria. Thousands of young men and women gave their life in the war against ISIS, to protect their new freedom. It would be both a crime and a blunder for the West to abandon these people. That would squander a historic chance for freedom in Syria and the Middle East.