You are here: Home / All News / Look where abortion is going now? 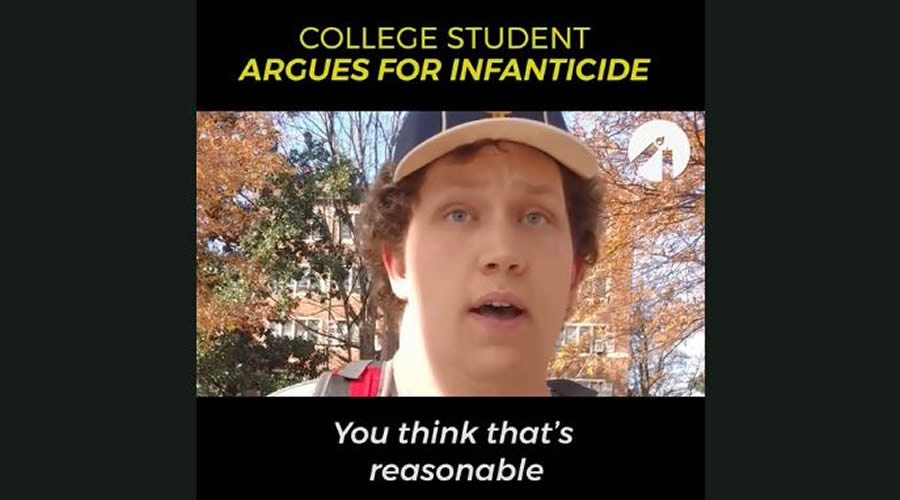 From the University of Tennessee-Knoxville comes word of a shocking video of a student arguing in favor of infanticide — killing babies up to two-years-old.

The video was filmed by Students for Life of America on the campus of Tennessee’s flagship taxpayer-funded university.

“The idea that someone could support infanticide is incredibly disturbing. Yet, it reflects the kinds of attitudes our staff members and students can face on a daily basis on high school and college campuses,” Students for Life of America president Kristan Hawkins said.

Brenna Lewis, SLA’s Appalachian regional coordinator, recorded one of the encounters in early December with a young man who said he had no problem with aborting two-year-old babies.

“The fact of the matter is without communication, we have no way of knowing of you are sentient or not,” the unidentified student said. “It’s no different than this tree. It’s alive, but is it sentient? I don’t know. I cannot communicate with it.”

But what if the baby is two-years-old?

“Can the two year old talk to me? In some instances I’m fairly certain that is,” the student said. “But generally speaking the child still has the inability to communicate. And until we determine that as such at what point does sentience become an issue. We can’t really debate whether or not that is the situation or not.”

Hawkins said that kind of thinking on a university campus is “political correctness gone awry.”

“Life is only valuable if I can talk to it?” she asked.

“When countries such as Iceland normalize the deliberate killing of babies with Down syndrome or states like California want to normalize abortion drugs on campuses, we should not be surprised when students display a wanton disregard for human life,” Hawkins said.

In 2015 the Washington Times reported on a controversy surrounding a statement allegedly written by a Princeton University professor on his faculty page:

Newborn human babies have no sense of their own existence over time. So killing a newborn baby is never equivalent to killing a person, that is, a being who wants to go on living. That doesn’t mean that it is not almost always a terrible thing to do. It is, but that is because most infants are loved and cherished by their parents, and to kill an infant is usually to do a great wrong to its parents.

And Christian Research Institute reported on an American University professor who asserted that infants do not “possess in their own right a property that makes it wrong to kill them.”

An unspeakable wickedness has infected many of our public university campuses. What kind of society are we to fund places that advocate for the slaughter of newborn babies? What kind of people have we become to turn a blind eye to such atrocities?