You are here: Home / All News / If you love dinosaurs you will love this study from ICR.org.
ACTS & FACTS     IMPACT
Dinosaur Tracks Back Noah’s Flood
Share Email Facebook Twitter Google+

There’s nothing quite like seeing firsthand dinosaur tracks that were made in mud or wet sand long ago. But how long ago were they made, and how did they form? No process quite like that happens today. We recently photographed similar tracks made in similar sediments from sites in the American South and West. What links them together? Did these dinosaur tracks really form according to the evolution-based story printed on the state-sponsored placards we saw at some of the sites? First some facts, then some answers.

At Government Canyon State Natural Area, large three-toed theropod tracks are embedded in limestone and match the clawed feet (Figure 1B) of a 38-foot-long Acrocanthosaurus—a T. rex look-alike with a small head crest. The limestone layer directly above it contains sauropod tracks assigned to a teenage Sauroposeidon, a long-neck dinosaur about 55 feet long. Scientists use the size and spacing of the footprints to estimate animal sizes. These sets of tracks occur near the top of the Glen Rose Limestone, close to the southernmost exposures of this particular limestone bed.1

Two hundred miles north of Government Canyon, the same basic geology and footprint combinations occur at Dinosaur Valley State Park where the Paluxy River flows near Glen Rose, Texas. There, tracks of a similarly large Acrocanthosaurus and a few other dinosaur tracks, including those of Sauroposeidon, appear near the bottom of the Glen Rose Limestone (Figure 2).2 The dinosaur-track layers at Glen Rose stack in repeated beds. The boundaries between the limestone beds and between limestone and sandstone look flat and sharp. Throughout central Texas, this same limestone unit has cavities and fossilized hollow tubes that likely represent worm and clam burrows. The fact the layers contain such short-lived features like burrows shows just how fast these sediments settled and hardened. “These thin track-bearing layers extend over huge segments of ancient coastal plain,” according to dinosaur trackway expert Martin Lockley.3 This one limestone unit holds dinosaur tracks from near El Paso, Texas, to Nashville, Arkansas—a distance of some 700 miles. 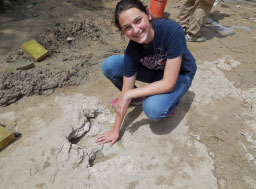 Figure 2. Brian Thomas’ daughter Verity investigates an Acrocanthosaurus print in limestone on the Paluxy River during a dig hosted by the Creation Evidence Museum of Glen Rose, Texas. (B. Thomas)

Tracks at Dinosaur Ridge near Morrison, Colorado, about 790 miles northwest of San Antonio, occur in a claystone bed sandwiched inside the Dakota Sandstone Group. Both the Dakota and Glen Rose Formations bear evolutionary age assignments of about 100 million years, and both hail from Lower Cretaceous rocks. The tracks include small theropod Ornithomimus and ornithopod tracks that match Iguanodon feet (Figure 3), plus birds and crocodiles whose foot marks are indistinguishable from those of their modern counterparts. They represent the northern end of a famous “Dinosaur Freeway” with tracks that extend from Colorado southward to New Mexico and then bend toward Oklahoma.4 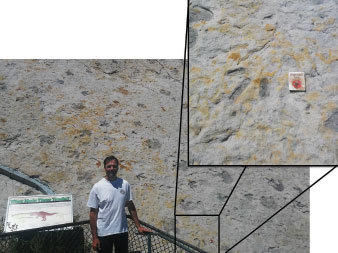 Figure 3. Dinosaur tracks in a limestone-rich bed of the Dakota Group near Dinosaur Ridge, Morrison, Colorado. Trackways include small theropods, crocodiles, and ornithopods. Inset picture shows one of the theropod prints near a placard that says, “Ornithomimus track.” (B. Thomas)

Now to the question of where these tracks came from. A placard at Government Canyon (Figure 4) reads:

The [ancient inland] shallow sea would rise and fall over time, occasionally exposing new shoreline. Dinosaurs would walk along the moist, fine-grained, clay-like mud and leave tracks which would then harden in the sun. When sea level would rise again, the prints were buried under new sediments.

This story stirs up some serious difficulties. First, why do most beaches today consist of sand rather than finer-grained clays and muds? Wind and water constantly sift away finer grains while larger sand grains are heavy enough to settle. Are we supposed to imagine that an ancient shallow sea had no tides or wave activity to wash away the mud that hardened and preserved creature tracks? Second, today’s shorelines have short slopes down to the water, whereas these dinosaur-tracked limestones lie flat as a pancake for hundreds of miles. The placard’s explanation does not match basic observations.

Figure 4. Part of the sign on display at Government Canyon State Natural Area near San Antonio, Texas. Its story does not explain how sea level could change rapidly enough to preserve the trackways.

How to Make Tracks

Are similar tracks preserved anywhere today, let alone along a shoreline? Recent road construction near Interstate 10 just north of Tucson, Arizona, revealed dozens of human prints in hardened mud. Western Digs reported that the tracks record barefooted farm labor in an irrigated cornfield several thousand years ago. Archaeologists surmise that “a sudden flood from a nearby creek” covered the footprints. Apparently, “the creek overran its banks soon after the prints were made, covering them in its uniquely mica-rich sandy sediment, forming a kind of mineralized cast.”5 These clues supply a recipe for track preservation that includes five essential ingredients:

Which of these ingredients involves known shorelines? The shoreline story for these dinosaur footprints appears difficult to defend. 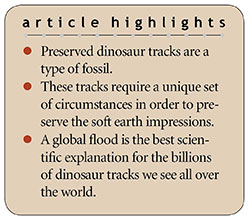 The Government Canyon placard’s tale of slowly rising and falling sea levels also strains the imagination. Tracks require rapid preservation. If exposed for months or even mere days, what would prevent worms, clams, fish, crabs, and especially rain (if exposed to air) or tidal action (if near a sea) from obliterating them?6 In theory, sea level changes take decades to centuries. Track preservation needs an erosion-preventing blanket of material on the order of hours.

Scenarios that include Noah’s world-covering Flood accommodate all five track-making ingredients, plus they explain why so many tracks are found in the same wide swath of land extending from Colorado to Texas. It seems the dinosaurs were able to survive through the early Flood partly because as the floodwaters advanced they could congregate and scramble to the elevated remnants of pre-Flood land—places the earliest sedimentary deposits had not yet reached or were not as thick. 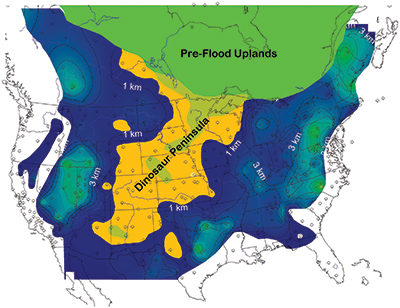 Figure 5. Isopach map from hundreds of drill cores showing thicknesses of pre-Mesozoic sediments across the U.S. and the outline of Dinosaur Peninsula. Many of the dinosaur trackways and fossil quarries across the West straddle this pre-Flood land mass. Map courtesy of Davis J. Werner.

Figure 5 labels this pre-Flood land “Dinosaur Peninsula.”7 We believe this narrow land mass extended roughly north to south from the Canadian border to New Mexico and possibly into isolated areas of Texas. It likely represented a pre-Flood swampy environment that possibly included some islands. It’s also possible some of the larger dinosaurs were swept alive by floodwaters to sites off the peninsula, where they left tracks before eventually dying as the rising water encased their footprints in sediment.

The map in Figure 4 indicates that the location of the Dinosaur Peninsula coincides with the Dinosaur Freeway and even many of the dinosaur-fossil quarries across the West.8 We believe these areas were not fully inundated until strata representing the later Mesozoic units were deposited as the floodwaters peaked. The sedimentary record shows very few or only thin early Flood deposits across this peninsula.9 In other words, the earliest Flood deposits occurred off the pre-Flood shore and captured sea creatures, while the later deposits engulfed land creatures as water levels rose. In this way, many dinosaurs escaped death and burial in the early weeks or months of the Flood, survived long enough to make tracks, and then succumbed later when the Flood reached its zenith.

Genesis 8:3 describes water washing back and forth as the floodwaters receded.10 With no above-water continents or mountains to impede tides, water would have swept in violent sheets across Earth. As God allowed sand and mud flows to scrub animals off Earth’s surface, flow rates at certain times and across certain regions were energetic enough to transport sediments that filled in and capped tracks made perhaps only hours earlier. The short time between the Flood’s sedimentation events helps explain the flat contacts between layers, as opposed to the jagged, rutted contacts that millennia of ordinary erosion would have generated. Plus, the worldwide scale of the Flood helps explain broad, flat mud or sand plains with so many dinosaur tracks in them on every continent except the largely unexplored rocks of Antarctica. If these reptiles all had hardy, thick skin, were strong swimmers, and could survive a long time without eating (features that characterize crocodiles), they stood a better chance of enduring the influx of sediment on which they walked or the water through which they waded during the early Flood’s torturous times (Figure 6). 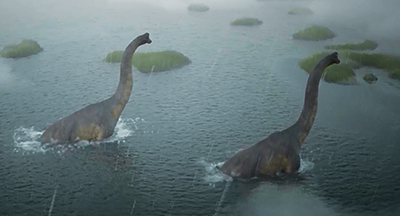 Figure 6. Illustration of sauropods wading. Most dinosaur tracks were made in mud exposed to air, but dinosaurs did wade at times during high floodwaters. Image from the ICR video series Uncovering the Truth about Dinosaurs, Episode 3: Dinosaurs and the Flood.

The flooding of Dinosaur Peninsula even explains two more mysteries. First, where are the baby dinosaur tracks? We have not seen any at these or other sites. Early Flood tsunamis likely carried away the baby dinosaurs while leaving their larger, heavier elders. Second, when modern animals make tracks (which almost never get preserved), they wander around, sniffing and foraging. But these dinosaurs were walking straight and in one direction, like animals fleeing danger do today. Dinosaur tracks do not record these creatures’ normal, everyday lives. Perhaps they were fleeing from dangerous tsunami-like Flood episodes.

Places like Dinosaur Ridge represent hundreds of trackway sites all over the world that confirm the global Flood.

Dinosaurs definitely tromped across freshly deposited sediment that muddy water quickly covered. Noah’s Flood has all the requirements to explain the tracks we find. Places like Dinosaur Ridge represent hundreds of trackway sites all over the world that confirm the global Flood.

Too Many Tracks for Noah’s Flood?

Critics of Noah’s Flood assert that Flood layers like these limestones contain far too many tracks to have been made during the first Flood months by the relatively few late-surviving dinosaurs. Since the 1990s, researchers have uncovered hundreds of track sites with billions of dinosaur prints all around the world. Anti-Flood arguments propose millions of years’ worth of chances for dinosaurs to make these billions of tracks. But mere talk of odds ignores the special circumstances required for dinosaur footprints to be preserved.

Humans can take several thousand steps in an hour. Creation researcher Mike Oard wrote, “A rough calculation shows that if a dinosaur made one track every 3 seconds [a very slow pace] while trying to escape the relative rises in the Floodwater by walking on BEDS [briefly exposed sediments] for five days, it would make 144,000 tracks, assuming it was so stressed it did not stop.”11 Several tens of thousands of dinosaurs making a week’s worth of tracks could easily account for the billions of tracks on Earth. Overall, dinosaur tracks actually help confirm the Flood model.