You are here: Home / All News / Maybe not all Muslims are closed minded. 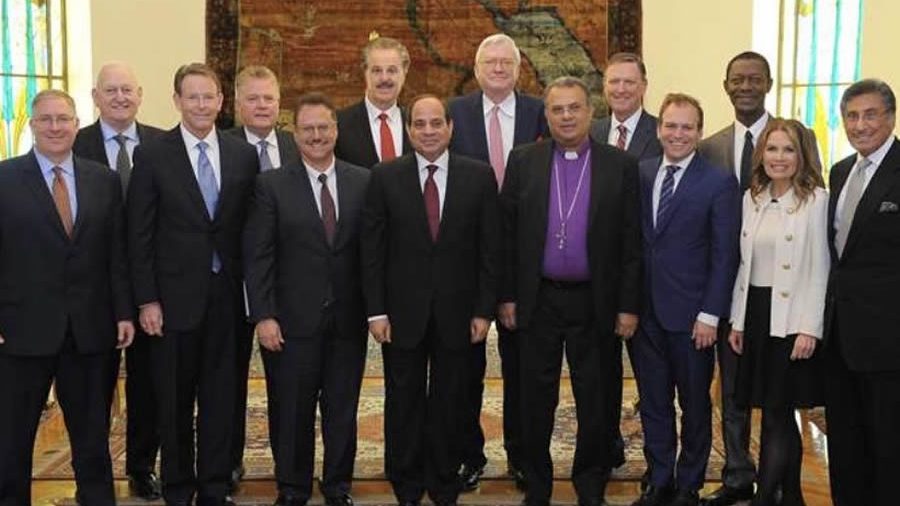 By Nancy Flory Published on November 2, 2017 • No Comments

The evangelicals told the president that they came to build a long-term friendship. They want a friendship between Sisi and people of Egypt, as well as other Christians. “He indicated that’s what he would like, as well,” said Joel C. Rosenberg. Rosenberg arranged the meeting, modeled after Sisi’s meeting in Washington earlier this year with Jewish leaders and others.

President Sisi expressed his condolences to victims of the New York terror attack on Tuesday. He said that Egypt wants to strengthen the “bridges of communication” and address challenges facing both the U.S. and Egypt. He also stressed Egypt’s openness to all religions and sectors. He then discussed the principles of citizenship, equality and non-discrimination among citizens. Sisi called for the spread of culture and acceptance of those from different cultures.

Joel C. Rosenberg, evangelical activist and author, initiated the three-hour meeting. “The president explained to us that Egypt has learned a lot over the years on how to make and maintain peace,” said Rosenberg. “Because it has a leadership role in the Arab world, it can help others move towards peace, based on its unique experience.”

“For the leader of Egypt to invite a Christian group to sit with him, discuss what he’s doing, talk about some of the difficult issues, that’s very impressive,” Rosenberg said.  I was hoping we could get ten minutes with him, and eventually we got almost three hours.”

The Americans wanted “to show our appreciation for his fight against terrorism and extremism, for his commitment to peace and security ties with Israel, and for saving Egypt from the darkness of the Muslim Brotherhood.”

President Sisi looks to “build on the legacy of President Anwar Sadat,” said Rosenberg. The Egyptian leader signed a peace agreement with Israel in 1978, and was killed because of it. SiSi now has more confidence in his stability and position. Now he will focus on more regional issues.

Egypt “played an important role” in the reconciliation deal between Palestinian groups Fatah and Hamas. Rosenberg said that with a different leader the groups would have been uncomfortable talking about the deal.” But with him, people felt like they should give him some space and consideration to lead this process. It’s OK to be skeptical, but let’s not be cynical — let’s give the man some credit and see what he can do in a very difficult situation.”

The Egyptians’ level of interest in their meeting surprised Rosenberg. “For the leader of Egypt to invite a Christian group to sit with him, discuss what he’s doing, talk about some of the difficult issues, that’s very impressive. I was hoping we could get ten minutes with him, and eventually we got almost three hours.

On his blog, Rosenberg asked for prayer for President al-Sisi:

Please pray for Mr. el-Sisi and his team. They are courageously fighting a winner-take-all-battle against Radical Islamist terrorists. They are working to stabilize a country that was going up in flames under the Hellish tyranny of the Muslim Brotherhood. They are determined to rebuild a shattered economy, safeguard all Egyptians … rebuild churches destroyed or damaged during the Arab Spring, maintain the peace treaty with Israel, and rebuild the U.S.-Egyptian alliance deeply damaged under President Obama.

This is not easy work, and there are forces determined to destroy him and his nation.

The President asked us to pray for him and for all Egyptians, and we committed to doing just that.