You are here: Home / All News / Nancy Pelosi you didn’t go far enough according to illegal immigration advocates. 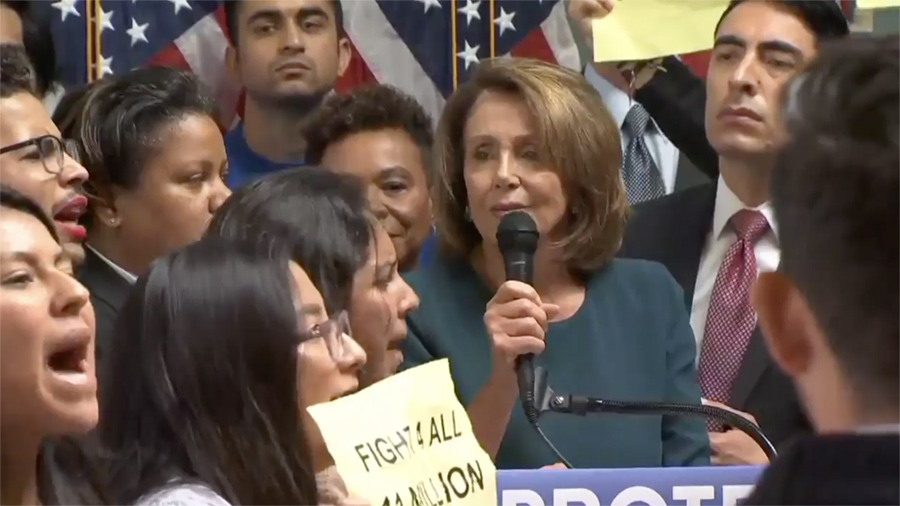 House Minority Leader Nancy Pelosi (D-Calif.) was forced to flee her own press conference Monday. She had scheduled it to announce a deal with President Trump on the DACA (Deferred Action for Childhood Arrivals) program. About 30 protesters from a group calling itself the Immigration Liberation Movement shouted her down at the joint press conference she held in San Francisco with Reps. Barbara Lee and Jared Huffman.

DACA grants amnesty to 800,000 people brought to the U.S. as youth. The protesters want the government to give legal status to all 11 million illegal immigrants in the U.S.

DACA allows illegal immigrants brought to the country before age 16 to remain in the country with two-year permits that allow them to work or go to school. It does not go as far as the DREAM Act, a bill proposed in Congress in 2013. That bill would also provide them with in-state tuition, green cards and a path to citizenship. Pelosi supports “a clean, bipartisan DREAM act.”

Wanting even more than Pelosi wanted to give, the protesters yelled slogans like “Undocumented, unafraid!”, “Brown power!”, “Shut down ICE!”, “All of us or none of us!” and “Trans lives matter!” They chanted, “We, the undocumented youth, will not be a marketing chip for Trump. … Democrats created an out-of-control deportation machine and handed it over to Trump. We demand accountability.”

Trump said he was ending the DACA program, which was created by the Obama administration without Congressional approval. It will terminate in six months if Congress does not take action.

Earlier this month, Trump reached across the aisle, meeting with Pelosi and Sen. Chuck Schumer (D-N.Y.) to work out an agreement. While Democratic leaders announced that a deal with Trump was reached, the White House has been more reserved about the success of the meeting.

Pelosi Forced to Walk Out of Her Own Press Conference

At first, Pelosi tried to go along with the disrupters. “Let me say this, because you’ve had your say, and it’s beautiful to our ears to hear you’re protecting yourselves.…” When it became clear they weren’t going to let her talk, she shouted back, “Just stop it now, just stop it now! … It’s clear you don’t want any answers.”

Ironically, the protesters cut off some Dreamers scheduled to speak. About 30 minutes into the press conference, Pelosi gave up and left. As she walked out, the protesters asked her if she was fighting deportation. When she responded yes, they chanted, “You’re a liar!”

Pelosi told reporters after she got outside, “I understand their frustration, I’m excited by it as a matter of fact,” she said. “But the fact is, they’re completely wrong. The Democrats are the ones who stopped their assault on sanctuary cities, stopped the wall, stopped the increased deportations in our last bill towards the end of April, and we are determined to get Republican votes for the clean Dream Act.”

Pelosi Refuses to Cave in to Protesters

So far, Pelosi has not caved in to their demands for mass amnesty. She issued a statement afterwards indicating she intends to focus on getting the DREAM Act passed. It claimed that she and her staff have met with dozens of immigration groups and advocates across the country this year alone to listen to their concerns and find a pathway forward to secure citizenship for 800,000 DREAMers in our country. She will continue to work with advocates in efforts to pass the DREAM Act.” It did not mention the 11 million.

Congress has been unsuccessful at passing the DREAM Act. One of the most liberal members of Congress, Pelosi knows that getting the DREAM Act passed will be an uphill battle.