You are here: Home / All News / That Old-Time Religion.

Revive Us Again: Billy Graham and That Old-Time Religion 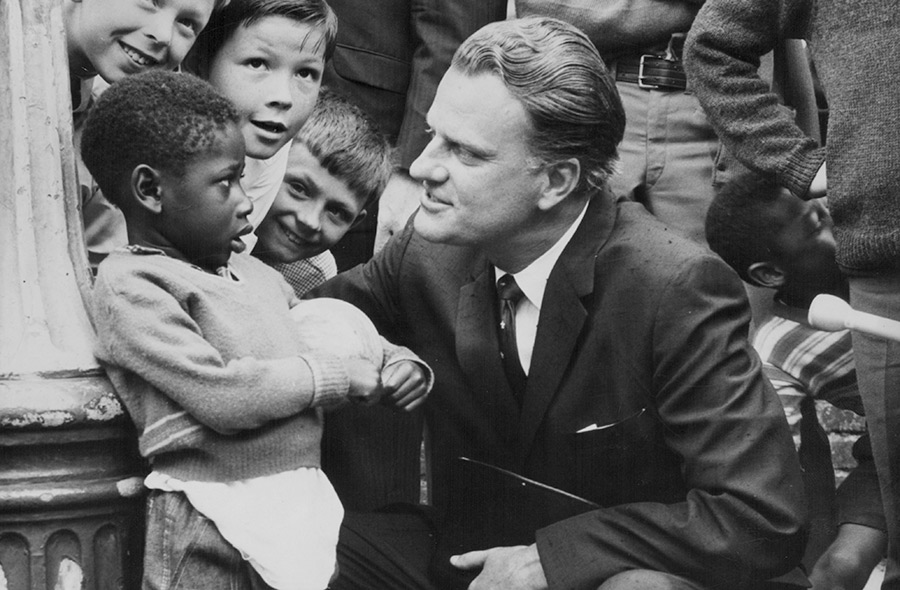 I am right behind Billy Graham on life’s final lap. My first encounter with the evangelist was in 1953 when the Billy Graham Crusade visited the fairgrounds in Chattanooga, Tennessee. The whole team was there: Cliff Barrows led the singing, George Beverly Shea, accompanied by Grady Smith on the piano, sang about the love of and grandeur of God. In my seventh year, singing “Just as I am,” I answered the altar call.

Television was new and we didn’t yet have one. Movies were great. Errol Flynn, who starred 18 years earlier in Captain Blood, reached late career glory in the 1953 technicolor pirate hit Against All Flags. I knew, someday, I’d be a pirate.

Cinemascope was on the way when, around a year before Billy Graham visited Chattanooga, dad got the born-again-in-the-precious-blood-of-lamb “old-time religion.” It hit like a case of flu that dad needed to share. Bad news for this budding buccaneer because many in the Deep South considered movies and TV to be Satan’s toys. Church three times on Sunday, on Wednesday night, and Bible study at dad’s new best friend’s house on Thursday. This blossomed in 1955 when dad deposited mom and me in Florida with my grandparents while he went off to seminary in Dallas, Texas.

My grandma and grandpa were Methodists who not only had a television but owned the first color TV in St. Petersburg, Florida. They also smoked cigarettes and drank Manhattans. I got to watch Superman, Sheena Queen of the Jungle, and fall in love with Mickey Mouse Club’s Annette Funicello.

I shocked the fourth grade class at Florida Christian Day School when my “show and tell” involved a critique of Audie Murphy in his movie, To Hell and Back. Saying “h**l” got me 10 minutes of standing with my back to the blackboard, in front of the whole class, while holding a paddle at arm’s length and repeating, “I must not say ‘h**l.” That old-time religion made me a nine-year-old apostate. Well, at least I got to say “h**l” a bunch of times.

God loves us. Jesus died for our salvation. That’s the message that revives us again and again

Dad matured. God’s love and grace in Christ Jesus pushed aside the legalism of his immediate conversion experience. On doctor’s orders, dad took up smoking to control his weight. He also enjoyed an occasional beer and sneaked Chianti into the house to wash down mom’s homemade spaghetti. Dad didn’t blanch when I chose the University of Alabama over a plethora of church-related schools. Before I departed home for Tuscaloosa he taught me how to mix dry martinis. Dad was cool.

And through it all was Billy Graham. In April 1965, second semester of my freshman year, the Billy Graham Crusade visited Tuscaloosa. The same crew from Chattanooga a dozen years earlier showed up in Denny Stadium on the Alabama campus. George Beverly Shea had just finished “How Great Thou Art” when rolling thunder exploded into a fierce lightning storm. In the downpour, Billy Graham’s sermon was over in a flash, “God loves you. His son Jesus died for your sins. God bless you and good night.”

Billy Graham returned to Alabama two months later when the Crusade rolled into Montgomery, Alabama. Reverend Graham insisted the service be totally integrated. In George Wallace’s Alabama, as worshippers sang God’s praises they also sat together; for many black and white Alabamians, they were worshipping together for the first time. Alabama quarterback Steve Sloan and sophomore Carol Ann Self, the “Miss Alabama” Million Dollar Band sponsor and future Bama cheerleader, gave their personal testimonies. It was all on national television and it was good.

In the 65 years since the Chattanooga Crusade, I have been a Lutheran, an Anglican, and three varieties of Presbyterian. I married a Roman Catholic without causing the Apocalypse. I enjoy Mass, and while I don’t partake, transubstantiation seems as plausible as virgin birth and resurrection from the dead: all mysteries of faith demanding belief. I’ve heard pre-millennialism versus post-millennialism argued without understanding either and salvation by grace alone put up against salvation by grace with sanctification by works. These arguments make us forget that fundamental things apply as time goes by.

A quarter century ago, right before dad merged with eternity, he asked why I picked the military over ministry. “Dad, in the military you turn your cheek to find your next target.” He smiled, “You got point there, son.”

What I loved about Billy Graham was what I like about the military: focus and simplicity. Billy Graham’s focus was simple yet eternal. God loves us. Jesus died for our salvation. That’s the message that revives us again and again — all of us.

Share to Facebook2Share to EmailShare to TwitterShare to More3