You are here: Home / All News / Pope Visits Kenya, Africa

By Harrison Mumia, Special to CNN 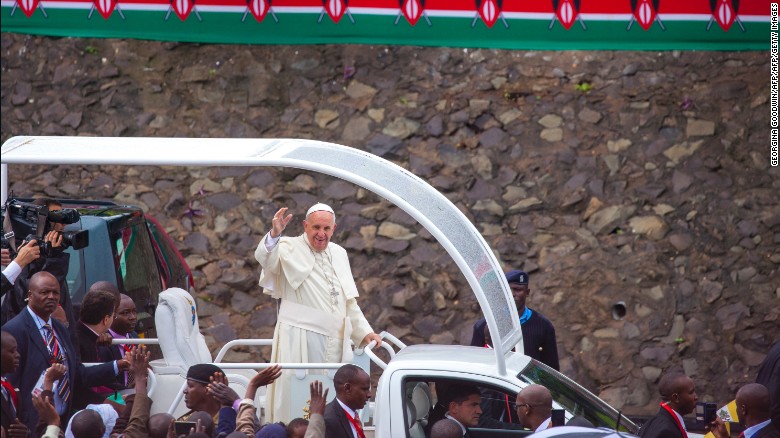 Pope Francis waves to a crowd at the University of Nairobi, Kenya, as he arrives to deliver a giant open-air mass on November 26, 2015.

Pope Francis said Friday that education and jobs will prevent young people from being radicalized and heading off to join militant groups.

The pontiff, who was visiting Kenya’s capital Nairobi, was asked what young people can do to prevent their friends and relatives from joining militants, such as the al-Qaeda-linked al-Shabab, based in neighboring Somalia. Kenyans make up most of foreign fighters in al-Shabab’s ranks.

“If a young person has no work, what kind of a future does he or she have? ” the pope said. “That’s where the idea of being recruited comes from.”

Earlier Friday, the pope denounced the conditions that many are forced to live in during a visit to a slum in Nairobi.

The pontiff said that access to safe water is a basic human right during the trip to the Kangemi area in the northwest of the city, where about 50,000 people live without basic sanitation.

He said that everyone should have dignified, adequate housing, with a sewage system, garbage collection and electricity as well as schools, hospitals and sport facilities. 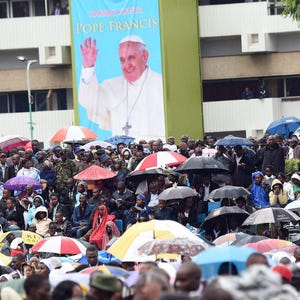 “The culture of poor neighborhoods has positive values…each human being is more important than the god of money,” he said, according to Kenya’s Daily Nation newspaper. He added that the suffering of the poor is caused by a greedy minority.

Denouncing the “injustice of urban exclusion” and the unfair distribution of land, he criticized “faceless private developers who grab even playgrounds where the children of the poor are supposed to recreate,” the Daily Nation said. 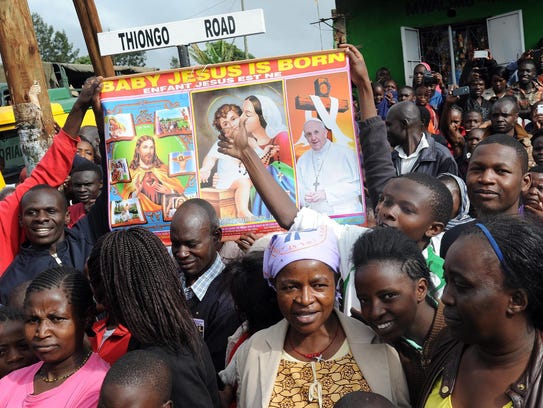 People hold religious pictures of the pontiff as they wait for the visit of Pope Francis in the Kangemi neighborhood in Nairobi, Kenya, November 27, 2015. (Photo: EPA)

He added: “These are wounds inflicted by minorities who cling to power and wealth, who selfishly squander while a growing majority is forced to flee to abandoned, filthy and run-down peripheries.”

“To deny a family water, under any bureaucratic pretext whatsoever, is a great injustice, especially when one profits from this need.”

The pope also attended a youth rally at the Kasarani Stadium, where he urged attendees to resist the temptation of corruption. “It’s in all the institutions, including in the Vatican there are cases of corruption,” he said. Revelations in two new books have detailed gross mismanagement and waste at the Vatican.

He later departed for neighboring Uganda, where his engagements include visiting President Yoweri Museveni at the state house.

Pope Francis arrived in Kenya on Wednesday as part of a six-day visit to the continent, which includes a trip to the Central African Republic.

Harrison Mumia is president of Atheists In Kenya. The opinions expressed in this commentary are his own.

(CNN)Pope Francis is currently in Africa for the first time. His visit has elicited a lot of excitement, leading to a flurry of activities by the state, media and the church.

It will be remembered that the Catholic Church is well established in most African countries, especially in East Africa, and particularly in Kenya. Over 20% of Kenyans profess the Catholic faith.

As a part of the preparations that were being made to welcome Pope Francis to Kenya, a public holiday was declared on 26 November by the Kenyan government. This came as a shock to me, and indeed to part of the atheist and secular community in Kenya. I therefore moved to court to challenge this declaration under Articles 8, 9 and 32 of the Kenyan constitution. 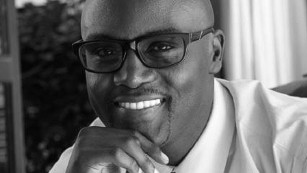 My decision to move to court has received a lot of backlash from the largely religious community in the country. To demonstrate this, in an article appearing in the Kenyan Star newspaper on 26 November, 2015, the editor described my move to court as a show of disrespect to the Pope.

At the onset, I must say that I admire Pope Francis. He is a liberal, modern Pope, whose demeanor contrasts sharply with that of previous Popes. His views on climate change, his seemingly accommodative approach towards gays and lesbians and his recognition for the evolution theory are some of the things that endear him to me.

Article 8 of the Kenyan Constitution guarantees the separation of church and state. It states that there shall be not state religion. The fact that Christians constitute a majority of Kenyans does not entitle them to impose their beliefs and practices on the rest of the nation.

And even if the head of state is a Catholic, the running of government affairs must not be about his personal religious inclinations. That’s the beauty of Kenya’s new constitution.

The declaration of a public holiday by the Kenyan Government on the basis of the Pope’s visit to Kenya grossly violated the principle of separation of church and state under article 8.

Do you have a message for the Pope?

It is my conviction that we must prohibit the expression of religious beliefs in all public institutions. No laws should be passed by parliament or the government that promote religious activities. This means that we must not declare public holidays in honor of a specific religion, sect or faith.