You are here: Home / All News / President Donald Trump is an answer to prayer for many Christians.

God and Donald Trump: An Answer to Prayer? 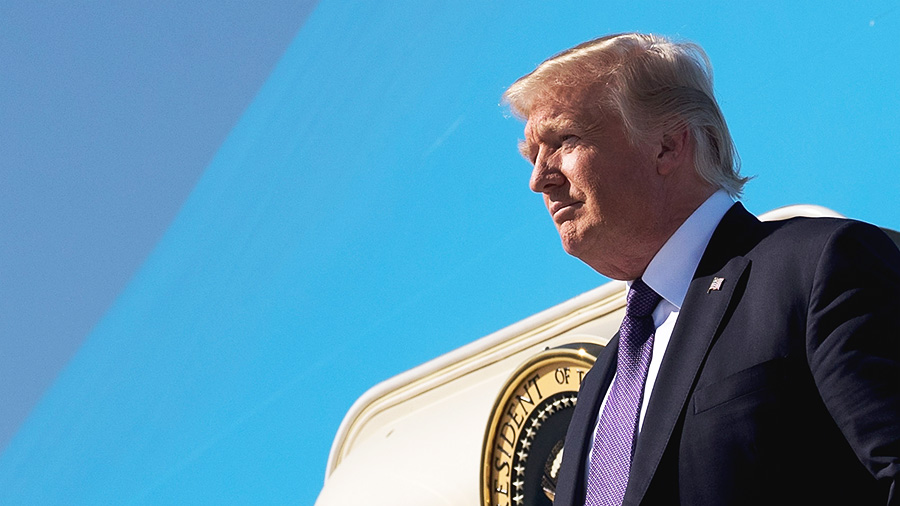 Excerpt from God and Donald Trump by Stephen E. Strang

An Answer to Prayer

While some people interpreted Donald Trump’s win as a political revolution, many conservative Christians saw it as a cultural counter-revolution and an answer to prayer. [Stream publisher] James Robison told me in a recent telephone interview that “a lot of Christians were praying that we wouldn’t lose freedom, that we would not lose the opportunities this nation offers with the protections and safeguards, and government functioning as a protector, and not potentially replacing God and our love for one another.”

Robison, who serves on the president’s faith advisory board and remains a friend and confidant of Trump’s, believes now that Donald Trump represents a supernatural answer to prayer, but he didn’t come in the package people wanted. Of the 17 Republican nominees, he ranked as the last choice of most evangelicals. “He would have been my last choice,” Robison told me. “Many conservatives said that we don’t know where Donald Trump is going to end up taking us, but we know exactly where Hillary Clinton would take us, and that would be a continuation of everything that’s wrong, destructive, and that would ruin America by taking away our freedoms.”

The secular pundits saw Trump’s victory only as a battle between Democrat and Republican, or between the Left and the Right. But Robison saw it as a supernatural spiritual battle. “What happened,” he told me, “is that God overpowered the foolishness of political correctness and the liberal (not just deceived but possessed) Left, which is far too often dead-set against a biblical worldview and against America’s traditional Judeo-Christian ethics. But they were being totally pushed back.”

The secular Left in this country, Robison said, are being manipulated by the powers that Jesus was talking about when He said of those who crucified Him, “They don’t know what they’re doing.” They knew exactly what they were doing, but Jesus said, no they didn’t. “They were under the control of another force, another power in the invisible supernatural realm of the Spirit. They were deceived by the deceiver.” Millions of Christians were praying for that deception to be overthrown, to prevent the government from being raised up as another form of Pharaoh, or some kind of an overseeing Caesar. The people were praying, “God, we’ve got to let You be God. We’ve got to stop this nonsense.” And Robison added, “Christians were praying for this to be stopped, but they never dreamed that it would be some person totally disconnected with politics, totally unable to even express himself like a politician, and someone who was best known as a shrewd maneuverer.”

Trump spoke with conviction about what’s wrong in this country, Robison told me. “He was totally open about everything that was wrong. Most of us would agree that he didn’t address those problems in the most statesmanlike or diplomatic terms, but everything he was saying was right on track. He was saying that many things in this country are bad and they needed to be dealt with. And he was 100 percent correct.”

Christians who were concerned about “government masquerading as God,” to use Robison’s expression, knew the government needed to be brought under control, so Trump’s win served as evidence that their prayers were being answered.

“He understood what it means to lay a foundation,” Robison said. “He is a builder. What he didn’t realize was that he was actually returning to the foundation of our freedom, and we know that the solid rock upon which we are to build is the transforming truth Jesus referred to when He said, ‘You shall know the truth, and the truth shall make you free’” (John 8:32, nkjv).

As many evangelical leaders did, Robison had initially backed Ted Cruz. But he also knew several other presidential contenders as well, including his lifelong friend Rick Perry. He knows Rand Paul and Carly Fiorina and has prayed with all of them. “They all looked like they had such great qualifications,” he said, “and frankly I was astounded that Donald Trump was even being considered and gaining momentum.”

Mike Huckabee was the first to tell Robison to get behind Trump after Huckabee dropped out of the race. Robison had been recruiting Huckabee to counsel Cruz, but the governor told him, “James, the man who listens to counsel the best of anybody I’ve been around is Donald Trump.” Robison was surprised to hear that and said, “Mike, have you lost your mind?” Mike said, “No, I haven’t. I’ve known him, James. I’ve watched him, and I know it sounds crazy, but I believe he’s the right man at this time.” Robison remembers hearing Jerry Falwell Jr. saying much the same thing.

After Ben Carson dropped out of the race, Robison prayed with him nearly every day on the phone. “The week that Dr. Carson decided to endorse Trump, we probably talked on average about two hours a day. Then all of a sudden he told me, ‘I’m endorsing Donald Trump.’ And I said, ‘Ben, you’ve lost your mind! What are you doing?’ He said, ‘James, listen to me. I’ve spent two hours with him this week and two hours another day. It’s just not the way it looks.’ So I asked him, ‘What do you mean?’ And Ben Carson told me, ‘James, I’m telling you, he’ll listen to wisdom. And my endorsement comes with the assurance that he will be willing to listen to those who have deep convictions and the ability to communicate their importance, and he agreed to do that.’”

Apparently Trump did listen. Before long Robison was flying with him to campaign events, giving him advice and offering spiritual counsel whenever possible. Robison said he has met with several presidents. “None of them were as open as Donald Trump,” he told me. “Mr. Trump called frequently on his cell phone, and he took my calls. We were able to have very open, honest exchanges where I could share the real concerns of pro-family, pro-faith leaders. He was always very appreciative and responsive. I was also able to travel with him on the plane and ride with him in the car in very important moments when I shared serious, deep concerns we had, which many thought Donald Trump would not listen to or even consider. But not only did he hear me with graciousness, he was very expressive in his appreciation for me and love for my family.”

In an interview for The Stream, Robison asked Jack Graham, pastor of the 42,000-member Prestonwood Baptist Church in Plano, Texas, how he assesses the president’s attitude toward people of faith. Robison said, “You’ve seen him in settings where someone is sharing their concern. … Do you find it amazing the way this president responds to people no matter who they are?”

Graham answered, “Beyond just personal skills, I am convinced he has a genuine spiritual interest and a desire to hear the viewpoint of others. In particular, it’s apparent he wants to know what conservative, Bible-believing Christians think. It’s been very gratifying and satisfying. And not only him but the people he has put into place. Vice President (Mike) Pence is a great Christian. Eight or nine of his Cabinet members, the people closest to him, are Christians, and they are having Bible study and prayer together.”

Graham also said, “I am grateful this president has given us the opportunity to speak into his life. When we prayed for him in the Oval Office earlier this week, though he was under a great deal of pressure, he was buoyant and joyful. We stayed in there for a good while conversing and praying. It was a God moment and a powerful experience.” Robison and Graham agreed that Trump’s words and actions indicate that this president values the opinions of the Christian leaders.

The sudden groundswell of support for Trump didn’t only occur at Trump’s political rallies. You could see it in churches, prayer groups and rallies of all sorts. Cindy Jacobs, co-founder of Generals International and the Reformation Prayer Network, is not well known in evangelical circles but is widely respected by charismatics as a prophet and teacher. She mobilized 10,000 intercessors to “prayer walk” the seven critical states that helped Trump win in November. These men and women walked around courthouses or the centers of towns praying for righteousness to prevail. In addition, a coalition of prayer leaders called As One also mobilized its networks two different times to prayer walk for 40 days.

Jacobs has ministered all over the world, and as the campaign grew more intense in the fall of 2016, she began receiving calls from friends in Europe, China and Latin America saying intercessors were praying fervently that Trump would be elected. Many took the election so seriously, they told her they were fasting and praying for hours each day. Jacob’s close friend, Lou Engle, a revivalist and cofounder of TheCall, a group that hosts 12-hour prayer rallies, urged supporters to begin a three-day fast as a petition for God’s mercy. He rallied thousands to join him because things looked so bleak. Conservative Christians believed that if Hillary Clinton won this election, it would be “game over” for religious freedom.

The night before the election, Jerry Johnson, president of National Religious Broadcasters, attended a prayer meeting in Washington, D.C., and came away telling friends he believed Trump would win. I had been praying too, and I felt optimistic that Trump was going to win. That’s why I accepted the invitation from Darrell Scott, pastor of the New Spirit Revival Center in Cleveland Heights, Ohio, to fly to New York to watch the election returns at the New York Hilton on election night. Scott was joined by several other African-American pastors. That event, with the whole world watching, turned out to be a huge victory celebration. For part of the evening I stood near pastor Robert Jeffress of First Baptist Church in Dallas, Texas. He told me what a miracle he thought it would be if Trump actually won.

For most of the evening, the television commentators kept predicting that Clinton would be victorious. Even Fox News, which was broadcast live on TV screens in the Hilton ballroom, was reporting that Clinton had the edge and Trump had too much ground to make up. Yet by 10 p.m. Eastern Time it seemed to me that Trump’s lead in electoral votes would be enough so that even a surge of West Coast victories couldn’t make up the difference.

The networks were showing all of the jubilation from the Hilton ballroom. It was packed with people who had worked diligently for the campaign. Then when Trump’s numbers hit the 270 mark, the liberal commentators were stunned silent by the realization that Trump had actually won.

Where I was standing in the Hilton ballroom, my Christian friends were shouting, and a few shed tears of joy. It was as if God had answered our prayers and the impossible had happened. We had a new president, one we believed God had raised up for such a time as this. And perhaps best of all, we each thanked God in our own way that Hillary Clinton was not going to be the next commander in chief.

Excerpt from God and Donald Trump by Stephen E. Strang