You are here: Home / All News / President Trump Orders Governors to Do More to Stop Violence or Else … 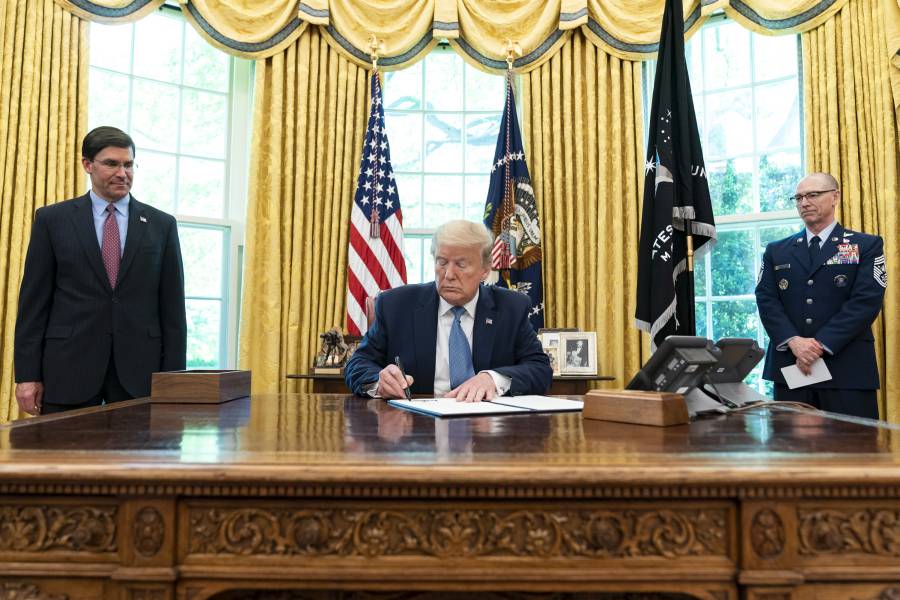 Having given the “leaders” of blue states and cities ample time to stop the rioting, arson and looting that’s being ginned up to exploit and dishonor the death of George Floyd, President Trump ordered riot teams from the Federal Bureau of Prisons to Washington, DC, and Miami. And more could be forthcoming if Governors don’t take action. That could include mobilizing thousands of soldiers, which the President has the power to do under the Insurrection Act of 1807.

Naturally, the media are hysterically painting this as an unprecedented abuse of tyrannical power and a declaration of war on the First Amendment (we have a right to riot, burn and loot?) But in fact, the Insurrection Act has been invoked over a dozen times, most recently in 1992 by President George H.W. Bush to stop the Rodney King riots in Los Angeles.

Sadly, that may be necessary because so many Democratic officials are refusing to do their #1 job of protecting public safety. Oregon Gov. Kate Brown is so addlepated with Trump Derangement Syndrome, she actually admitted she refuses to do what’s necessary because “TRUUUUMP!!” She said at a press conference, “Having soldiers on the streets across America is exactly what President Trump wants … Trump wants Governors to deploy the National Guard as a show of force to intimidate the public.”

Please Support The Stream: Equipping Christians to Think Clearly About the Political, Economic and Moral Issues of Our Day.

Monday night, Trump said, “I swore an oath to uphold the laws of our nation and that is exactly what I will do. I am your president of law and order and an ally of all peaceful protesters.” He said we cannot allow their righteous cries to be drowned out by an angry mob. But, “a number of state and local governments have failed to take necessary action to safeguard their residents. I am taking immediate presidential action to stop the violence and restore security and safety in America. I am mobilizing all available federal resources, civilian and military, to stop the rioting and looting, to end the destruction and arson and to protect the rights of law-abiding Americans, including your Second Amendment rights.”

A Sudden Desire for Guns

Speaking of Second Amendment rights, a lot of people, especially in blue states, are waking up to the scary reality that their leaders will do very little to protect them, so they have to protect themselves. Gun sales are exploding, and the price of gun stocks is booming. Former CIA officer Bryan Dean Wright (@BryanDeanWright) tweeted that he talked to a major “Progressive” Democratic fundraiser in Colorado who was spooked by rioters getting near his house. Nobody he knew owned a gun, so he was buying one today (hope there’s not a 10-day waiting period!) Wright said, “The left is losing their base, folks. People prefer order over anarchy.”

I’m sure that many of the people buying guns to protect their homes, families and businesses are African-American. Contrary to the false media stereotype, conservatives are perfectly fine with that, it’s the liberals who are expressing alarm. That’s no surprise: many years ago, when the KKK was terrorizing blacks in the South by burning down their neighborhoods, the NRA was the only constitutional rights organization that defended their right to buy guns to protect themselves. History is merely repeating itself.

Meanwhile, word on social media is that Antifa, having helped torch blue cities, now thinks they’ll move into the suburbs and terrorize people there. That would be the dumbest idea they’ve come up with yet. And that covers a lot of territory. Many people live in the suburbs after fleeing cities because they were sick of depending on noodle-spined leftist mayors who order the police to stand down and who sympathize with criminals over victims. Instead, for protection, they have guns.

Polk County, Florida, Sheriff Grady Judd put it succinctly, when he warned, “The people in Polk County like guns, they have guns, I encourage them to own guns. If you try to break into their homes to steal, to set fires, I’m highly recommending they blow you back out of the house with their guns.”

Mike Huckabee is the former governor of Arkansas and longtime conservative commentator on issues in culture and current events. A New York Times best-selling author, he hosts the weekly talk show Huckabee on TBN.