You are here: Home / All News / Here is what is really happening with Cardinal Tobin and George Soros. 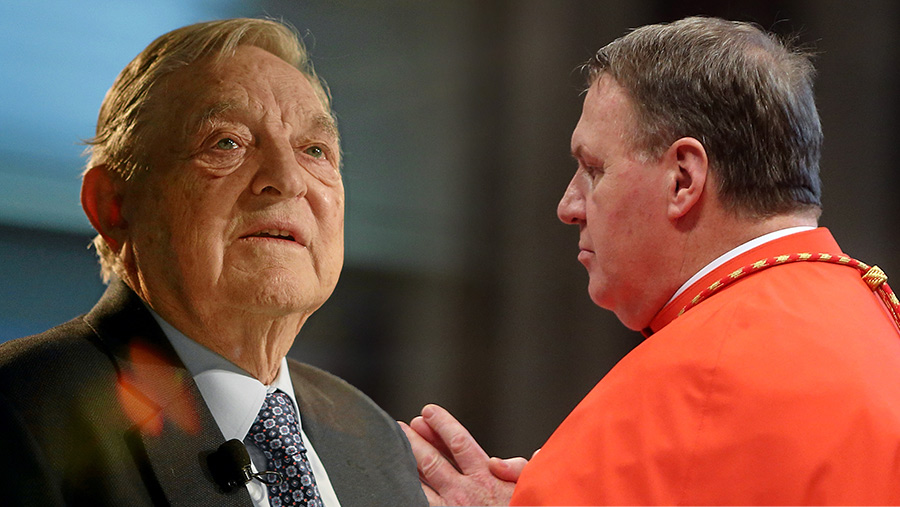 Two reports appeared of a U.S. cardinal, Joseph Tobin of Newark, New Jersey, trash-talking Americans to the foreign press. On the Fourth of July. The Pope Francis-appointee delivered his smack-down in an interview with the French newspaper La Croix.

Before the final French elections, that paper featured a love-fest of bishops, priests and nuns. Each endorsed pro-abortion, anti-marriage open-borders socialist Emmanuel Macron. This week it gave Tobin the chance to apologize to Frenchmen. For what? The ignorance and bigotry of Americans who voted for Donald Trump. Christopher Manion wrote in The Wanderer that Tobin condemned

what he called “an exaggerated patriotism in the United States,” resonating the tone of Barack Obama’s denunciation of America’s “aggressive nationalism” just two days before.

The cardinal used the interview to broadcast his sustained vilification of voters who opposed presidential candidate Hillary Clinton. “I think President Trump is appealing to the dark side of Americans,” he insists. In fact, his disdain goes so far that, just after the election, he detoured from his text at Notre Dame pointedly to mock personally the evangelical faith of Vice President Mike Pence, a fallen-away Catholic….

Before Pope Francis, he explains, the backward leaders of the American Church “were very marked by John Paul II,” and as a result “many Americans have moved away from the Catholic Church or do not find the meaning they seek because they perceive it as rigid.”

After this curious interpretation of post-Vatican II history, America’s newest cardinal lost no time making it clear just what peripheries he was open to in what his fans at The New York Times cheered as the “shifting church.” In May, he convened a special celebration to welcome “lesbian, gay, bisexual, and transgender Catholics” to his cathedral.

As The Stream reported, the mass Tobin sponsored was led by Rev. Francis Gargani, C.Ss.R. That priest gives retreats to a gay activist group that recommends as a spiritual resource the book Queer Christ.

It’s okay to call Jesus Christ “queer.” But it’s “dark” and “dangerous” to insist that immigration laws be enforced.

Thomas Williams wrote more at Breitbart about Tobin’s message to the French:

“Donald Trump is a businessman. He says he’s always looking to close a deal,” the Cardinal said. “The bishops must beware of him, because he tells them that he will be against abortion, that he won’t force them to pay for contraception, and in return, he asks for silence concerning his disrespectful remarks toward others or on the deportation of migrants. It’s dangerous.”

“We, American Catholics, are a Church of migrants. We have always pleaded their cause,” he said.

So let’s get this straight. It’s okay to call Jesus Christ “queer.” But it’s “dark” and “dangerous” to insist that immigration laws be enforced. That’s funny, because as a Catholic I use the church’s Catechism as the guide to what we believe. And here is what the Catechism teaches about homosexual activity:

Basing itself on Sacred Scripture, which presents homosexual acts as acts of grave depravity, tradition has always declared that “homosexual acts are intrinsically disordered.” They are contrary to the natural law. (2357)

And here is what it says about the duties of would-be immigrants:

Immigrants are obliged to respect with gratitude the material and spiritual heritage of the country that receives them, to obey its laws and to assist in carrying civic burdens (2241). [Emphasis added.]

So Tobin pooh-poohs the fact that President Trump will protect innocent human life and religious liberty. Because in his opinion the president uses “disrespectful” language. And he wants to enforce immigration laws. Which U.S. voters elected him to do.

Soros’s pro-choice “Catholic” groups were exposed in the Wikileaks documents as trying to collude with the Clinton campaign. Their goal? To foster a “Catholic spring” to overthrow the “Middle Ages dictatorship” that is the church.

Tithe to Iraq or Syria Instead

Catholics in Tobin’s archdiocese face an ugly dilemma. Their shepherd, the heir of the apostles in their area, is leading souls astray. He prefers radical politics to the teachings of his own Church. If I were a Catholic in Newark, I would express myself in the only way open to me: I would cut off all financial support to the diocese. I’d send the money instead to brave, faithful bishops who choose persecution over apostasy, in places like Iraq and Syria.