You are here: Home / All News / Take away the trees, rocks and other signs, they could distract people when they are driving. 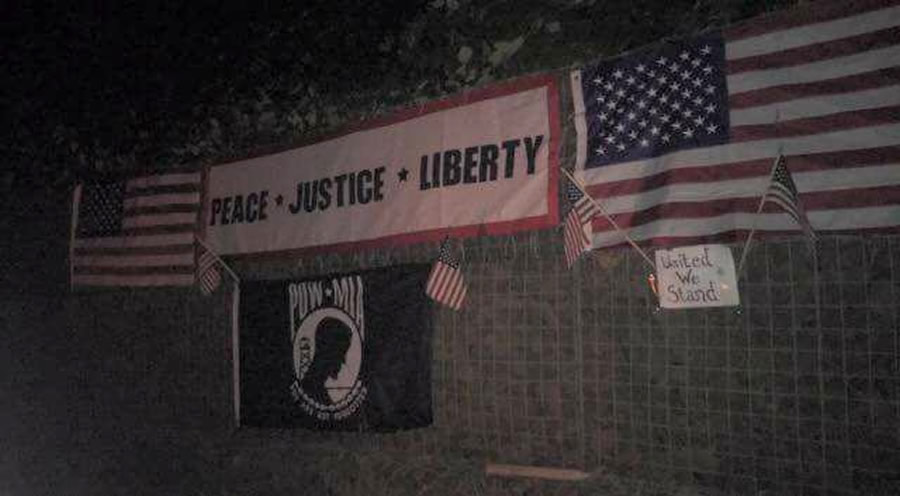 Local residents rebuilt part of the flag display in Preston, Wash., after King County officials took it down.

For as far back as anyone can remember there’s been a roadside memorial honoring military veterans along Preston Fall City Road in King County, Washington.

For more than 10 years, local residents have decorated a rock wall with American flags and POW flags — a reminder of the price that many of our countrymen have paid to keep our nation free.

Recently, someone complained to King County leaders about the sign — saying the patriotic display was “offensive.”

So, last week a King County road crew took down the display — tearing flags off the rock face.

Well, that decision did not set well with the flag-waving patriots of Preston. Hundreds joined a Facebook page urging King County to restore the memorial.

“One person says they don’t like it, and they take it down. I don’t understand,” one resident told television station Fox 57. “We live in the United States of America. This is our flag. Why is it offensive?”

But instead of standing down as their elected leaders desecrate the veteran’s memorial, local residents decided to fight back — by rebuilding the memorial.

“People were really, really upset about this,” another resident told the television station.

Fox 57 reports that county officials want to find a new location for the memorial — because “signage and displays can create a visual distraction that may cause drivers to look away from the roadway.”

“And as for the display’s content — officials say making allowances for some would make other displays harder to ban,” the television station reported.

I salute the brave men and women of Preston, Washington — patriots all. And I have no doubt that on Election Day they will send a message to the lawmakers who gave the order to remove Old Glory.

Todd Starnes is host of Fox News & Commentary, heard on hundreds of radio stations. His latest book is The Deplorables’ Guide to Making America Great Again. Follow Todd on Twitter @ToddStarnes and find him on Facebook.