You are here: Home / All News / The teaching of many colleges and universities is changing to be very liberal.

A Majority of Republicans Think Colleges are Bad for America

The left-right split on higher education represents an opportunity for both sides. 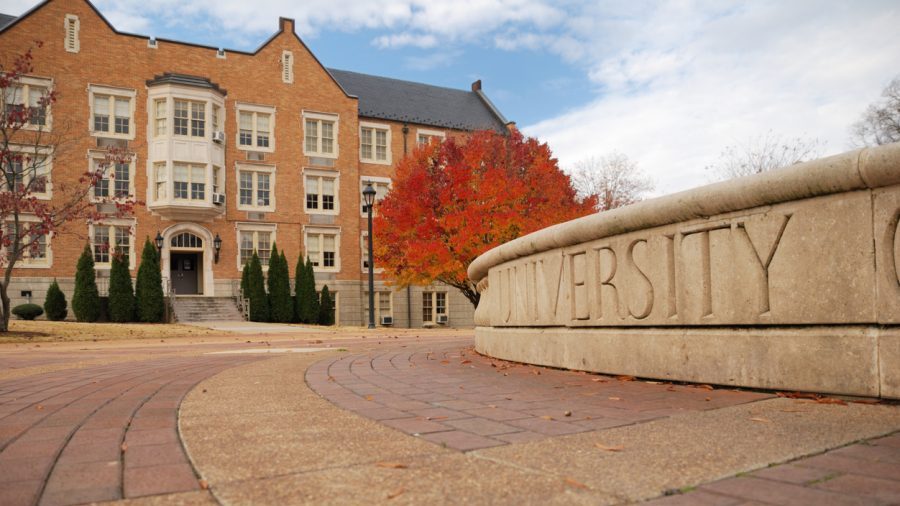 While 72 percent of Democrats think that colleges and universities have a positive effect on the country, only 36 percent of Republicans agree.

The Pew Research Center is out with a new study on how Republicans and Democrats view institutions. One of their findings really stood out: While 72 percent of Democrats think that colleges and universities have a positive effect on the country, only 36 percent of Republicans agree.

As recently as 2015 a majority of Republicans said that colleges and universities had a positive impact. But that figure has slumped by 19 points (from 54 to 36) over just two years. 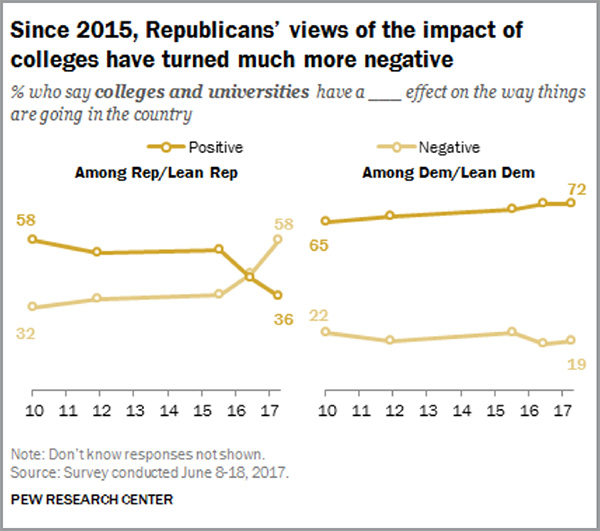 If we go back to 2010, the split in approval between Republicans and Democrats was just 7-10 points. Today it’s 36-39 points. That’s a sea change, and most of it took place in just the last two years. I think at least two factors are at play.

College “Isn’t Worth It”

Graduates in 2009 and the next few years entered a challenging job market. They were competing with seasoned veterans who were sidelined in the recession. Student debt loads crept up while starting salaries flat-lined. Many young adults had to settle for underemployment — jobs that didn’t require a college degree, let alone the particular degree the student earned.

On the left, there were calls for student loan forgiveness and free college. Republicans questioned whether college was worth it.

What happened? Student loan payments were missed. Default rates rose. And a chorus of concerns followed. On the left, there were calls for student loan forgiveness and free college. These folk weren’t questioning the value of college. They were questioning what students were required to pay or borrow for college. As the recent Pew data shows, Democratic support for colleges and universities has increased from 65 percent to 72 percent since 2010.

But Republicans responded differently. They questioned whether college was worth it. A growing bureaucracy was contributing to rising costs, they said. They argued that traditional liberal arts education was being compromised by revisionist progressives. (Think courses like Lady Gaga and the Sociology of Fame instead of History of Western Civilization.) They argued that students weren’t learning very much and weren’t being prepared for the jobs in the 21st century.

The Heterodox Academy, a group of professors who support viewpoint diversity, released an updated guide to colleges. They asked which campuses are best for students seeking exposure to diverse perspectives? Schools in the northeast — home of elite schools like Harvard, Yale and Middlebury College — placed last. The ratio of liberal to conservative faculty in that part of the country? A whopping 28 to 1.

Opportunities for Both Sides

The left-right split on higher education represents an opportunity for both sides. On the left, administrators should embrace the Chicago Principles of Free Expression. They should encourage students to practice persuasiveness with those who differ. They should work harder to hire a politically diverse faculty. College is supposed to be a place where students learn to think for themselves. Why not expose them to the best thinkers from all parts of the political spectrum?

On the left, administrations should work harder to hire a politically diverse faculty. Those on the right should resist the anti-college mindset.

Those on the right also have an opportunity. Yes, some students are better off getting an associate’s degree or learning a trade. But resist the anti-college mindset. A good college education makes sense for students who stand to benefit from the training, provided they graduate without too much debt.

Lastly, religious institutions should not be shy about their identity. There is a market for schools whose faculty care more about teaching than research — who shape the lives of their students, not just fill their minds. And there are plenty of faculty who are happy to serve at schools where they can freely express their religious convictions, while teaching students to do the same.

Dr. Alex Chediak (Ph.D., U.C. Berkeley) is a professor at California Baptist University and the author of Thriving at College (Tyndale House, 2011), a roadmap for how students can best navigate the challenges of their college years. His latest book is Beating the College Debt Trap. Learn more about him at www.alexchediak.com or follow him on Twitter (@chediak).