You are here: Home / All News / This spending bill has a lot to be desired!

President Trump sparked fears of an impending government shutdown Friday by threatening to veto a $1.3 trillion spending bill passed by Congress, citing the lack of a deal that would include protection for illegal immigrants brought to the country as children in return for funding for a wall.

Trump tweeted that he was considering the veto, saying that recipients of the Obama-era Deferred Action for Childhood Arrivals (DACA) program “have been totally abandoned by the Democrats.” He added that the border wall, which he said was “desperately needed for our National Defense” is not fully funded.

The House adjourned Friday morning until Monday, meaning that if Trump vetoed the bill then the government would shut down.

Congress could override the veto, but it would need two-thirds of the House and Senate. The bill passed 62-35 in the Senate and 256-167 in the House, both short of two-thirds. Republicans would also be wary of overriding a veto by a Republican president.

Trump moved to end the DACA program in September, giving Congress a six-month window to come up with a legislative fix. That deadline has been delayed by court orders, but the fate of the 800,000 enrolled recipients is still uncertain.

The White House has tried to use the DACA issue to convince Democrats to support approximately $25 billion in funding for Trump’s central campaign promise. But a congressional GOP source told Fox News talks broke drown after Democrats pushed for a path to citizenship to include also those who are currently eligible — expanding those covered to 1.8 million. 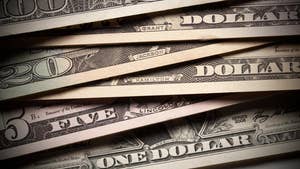 The spending bill passed Congress includes only $1.6 billion for border measures — much of which is for repairs to already existing fencing. It explicitly rules out any new prototypes of the kind President Trump viewed this month in California. But House Speaker Paul Ryan, R-Wis., and the White House has pushed back against conservative concerns on Thursday, saying it provided for 100 miles of border construction.

Democrats had claimed victory on the issue, pointing to the fact that Trump’s requests for new deportation agents and detention center beds had gone unanswered, although they had expressed disappointment at the failure to get a DACA fix in the bill.

The deal has also irked more conservative members of Congress, who objected to the size and cost of the bill (which ran in at over 2,000 pages) as well as the failure to remove funding for Planned Parenthood and so-called “sanctuary cities.”  Other Republicans approved of the deal, pointing to a massive increase in military and infrastructure spending as well as funding to help combat the nation’s opioid crisis.

Trump’s veto threat was totally unexpected, particularly as the White House had signaled Trump would support the bill if passed by Congress. Most lawmakers have already left Washington for a two week recess. Some are on overseas trips already.

Some conservatives applauded Trump’s calls for a veto. Sen. Bob Corker, R-Tenn., called the bill “totally irresponsible” and encouraged the veto: “I am just down the street and will bring you a pen,” he tweeted.