You are here: Home / Children Questions / Were Adam and Eve both White?

Answer: If you have looked at the pictures that I have painted, the one this person is referring to is of the Seven Days of Creation. The sixth day and the seventh day show Adam and Eve as Black. Even though the person is not specific and seems to end the comment in the middle of their sentence, I believe they are probably referring to Adam and Eve being portrayed as Black, because they are not the first to comment on this.

I realize that everyone has their taste in art and they have a right to their own opinions, and I respect that. I do wish that people would be more specific when making comments because these can be helpful. However, could I defend the painting? The reason I painted Adam and Eve in this painting dark skinned is because I wanted people to see something besides how Adam and Eve have most often, if not always been portrayed, as White.

I am sure there are some paintings out there that are of Black Adam and Eve, but I have not seen them. I believe the reason for this is because the first printers were European and they printed pictures that appealed to their people. Mixed people pictures were not often drawn, because some thought this was wrong for them to intermarry, even though the Bible does not say this. In fact, in the case of Moses with his Black wife, God defended him.

Nowhere in Scripture does it say what color Adam and Eve were, so I felt it was high time that someone set the record straight. Why should we assume that they were White? Two thirds of the world’s population has more color than white. Adam was formed from the dust of the ground, is it too much of a stretch to say that he had more color than white? The Hebrew words seem to indicate color: “Adam is probably related to the verb ‘adom, to be red, referring to the ruddiness of man’s complexion. ‘Adamah, “soil” or “ground,” may also be derived from this verb.” (The Spirit Filled Bible)

We need to get over the stereotypes that we have from seeing pictures in Bible story books and Sunday school materials that may not always be accurate. I am not really dogmatic on what color Adam and Eve were because the text does not say; however, I would say it is very narrow minded to think that neither of them could be of color. How then did we get so many variations of brown in the world?

By the way I have painted another picture and this one is number 20, in it Adam is lighter skinned with red hair and Eve is black. This may have been the way it was also. We do know that genetically you do not get Black people from White people. However, you can get White from Black in the case of Albinos. I do not know what color God created Adam and Eve, but I do know that everything reproduces after its own kind genetically, so why would it be any different for people? “And He has made from one blood every nation of men to dwell on all the face of the earth, and has determined their preappointed times and the boundaries of their dwellings.” (Acts 17:26)

Ken Ham, a well known Christian and a scientist, on his site Answers in Genesis (one of our links) says that: “It is thus easily possible, beginning with two middle-brown parents, to get not only all the ‘colors,” but also people groups with stable shades of skin color.” “.The other possibilities mean that five levels of melanin (shades of color) can result in the different offspring of such a marriage.If three gene pairs were involved, seven levels of melanin would be possible. Thus a rage of ‘color,’ from very light to very dark, can result in only one generation, beginning with this particular type of mid-brown parents.” http://www.answersingenesis.org/Home/Area/AnswersBook/races18.asp

Maybe in the future I will paint this type of Adam and Eve.

One of my reasons for painting Adam and Eve with color was to challenge people to think deeper thoughts about the word of God, and not to necessarily rely on the pictures they have seen of Adam and Eve in the past. 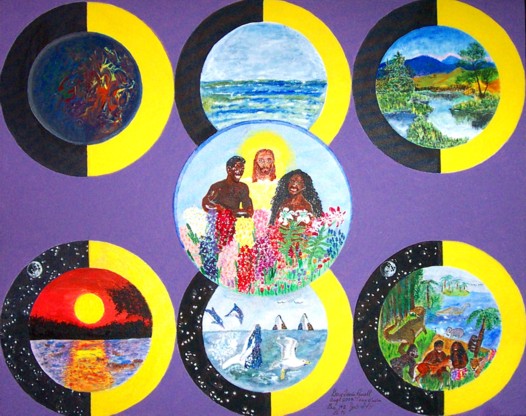 For more information email me.